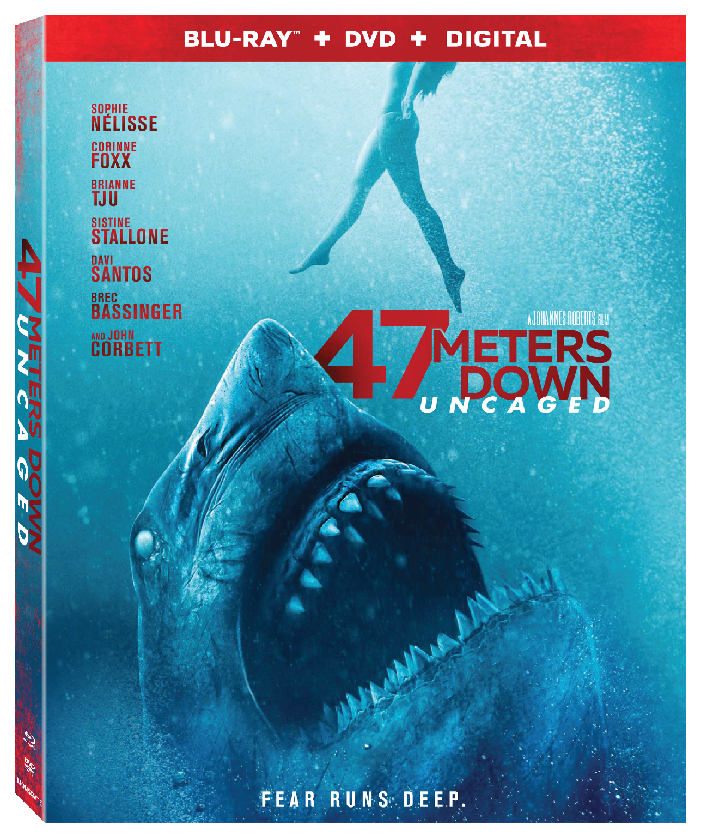 The cover the Blu-ray Combo Pack for the adventure horror sequel, ’47 Meters Down,’ which was co-written and directed by Johannes Roberts.

Immersing themselves in fear-inducing, claustrophobic situations, both physically and emotionally, one time during their careers can be a terrifying experience for many filmmakers. But there’s an elite group of writer-directors who willingly-and happily-engage in repeatedly returning to the horror genre. English scribe-helmer, Johannes Roberts, is one such versatile, intriguing filmmaker who’s able to naturally turn excitement into a jolt of terror in any frightening situation. He most recently proved his adaptability to evoke dismay in any situation with his horror follow-up, ’47 Meters Down: Uncaged.’

Roberts first made a name for himself in the horror genre when he previously wrote and directed the hit 2017 initial installment in the ’47 Meters Down’ series, as well as helming last year’s sequel, ‘The Strangers: Prey at Night.’ The filmmaker returned to the ’47 Meters Down’ franchise to co-scribe the sequel’s script with Ernest Riera, as well as once again direct the latest entry.

’47 Meters Down: Uncaged’ is now available on Digital 4K Ultra HD, courtesy of Lionsgate, which will also distribute the adventure drama on Blu-ray Combo Pack (plus DVD and Digital), DVD and On Demand this Tuesday, November 12. The home release comes after the movie was distributed in theaters this past August by Entertainment Studios Motion Pictures.

’47 Meters Down: Uncaged’ follows the diving adventure of four teenage girls-Sasha, Nicole, Mia and Alexa (Corinne Foxx, Sistine Stallone, Sophie Nélisse and Brianne Tju)-as they set out to explore a submerged Mayan City. Once inside, their rush of excitement turns into a jolt of terror as they discover the sunken ruins are a hunting ground for deadly Great White Sharks. With their air supply steadily dwindling, the friends must navigate the underwater labyrinth of claustrophobic caves and eerie tunnels in search of a way out of their watery hell.

Roberts generously took the time to talk about co-writing and directing ’47 Meters Down: Uncaged’ during an exclusive phone interview. Among other things, the filmmaker discussed how he was immediately interested in making the sequel when he was asked to return to the franchise. But he knew the story had to have some different elements that separated it from the original movie, which is why he decided to incorporate the cave diving into the story. He also expressed his gratitude towards the cast and crew for the dedication they brought to their respective roles and jobs, especially when it came to shooting the horror adventure drama underwater.

The conversation began with Roberts explaining what the process was like of diving into creating the follow-up. When he was approached to make the second installment in the franchise, he had to figure out a way to maintain the tone of the series, while also creating a new story, group of characters and environment. “I thought, we can’t have people going to a shark cage again, because we didn’t want to give the viewers the same thing all over again. But I also had to figure out what story I could tell that was also going to interest me in returning to this genre,” the writer divulged.

Roberts, who learned how to cave dive while making the original ’47 Meters Down,’ thought the experience was equally amazing and terrifying. “It’s just incredible to go down to these places that human don’t normally get to see. So I thought it would be great to make a movie down there, and see how it photographs. I also wondered what would happen if we saw a shark down there. So I thought exploring underwater places through cave diving would be a great way to make a sequel that was both unique and payed tribute to the original,” the scribe added.

Once the script was written, the filmmaker and his crew built the entire set in two tanks. “One tank was built in Basildon, and the other one was in Pinewood. It was such a big endeavor that no one’s ever truly done before,” Roberts shared. He added that the crew used “very little CGI; the sets were all completely constructed. When the (actresses) are swimming through the caves, they’re in real caves that were built on sets. What they were doing was very dangerous,” he admitted.

Further speaking of the actresses who appeared in ’47 Meters Down: Uncaged,’ the director explained that “we held auditions to find four women who I received a great energy from, and who would lift this movie. Sophie and I had spoken before on various occasions, and we wanted to work together. So she was the first one who signed on,” he shared.

Roberts appreciated that Nélisse was interested in starring in an adventure horror film. That curiosity was ignited because before she signed on to appear in the second installment of the shark franchise, “she was known to be a very serious actress. She’s mostly done serious genre project, and I really respected her craft.”

After Nélisse signed on to star in the follow-up, “Sistine came in with this bundle of energy, and Brianne gave an amazing read. Corinne came in later, almost by chance. It just all perfectly came together.”

The helmer added that the casting process “was really about finding four girls who bonded, and were also new to this process. I think that was the only way it could really work.”

Once the actresses signed on to star in the horror sequel, Roberts, along with the cast and crew, were faced with some challenges on the set. “The camera crew and the cast are only allowed to work underwater four hours a day,” he revealed. “So they had to get the tanks on, and then go down underwater. We then shot for however long the tank lasted, which depended on what they were doing, and then they would come back up to the surface.” After taking a break, the cast and crew would get new tanks on, and start the process over. Once each person’s four-hour limit was finished everyday, a replacement would be brought in; the actresses even had doubles stand in for them, so that the filmmakers could get the material that needed to be captured everyday.

During that process, the helmer “learned a lot about filming underwater. I discovered what photographed well in terms of sets,” which helped him realize that he could shoot the underwater city location that’s featured in the movie. “The tunnels and caves really photographs beautifully.” Roberts added that he “really wanted to make this film different from the first, which featured endless blue. I wanted this one to be a complete underwater maze.”

Further discussing the experience of shooting ’47 Meters Down: Uncaged’ mainly underwater, the filmmaker also mentioned what his experience was like collaborating with his cinematographer, Mark Silk, who he also collaborated with on the original feature. “I couldn’t do these movies without Mark-he’s unbelievable. He worked a lot with the gaffer, Bernie Prentice, and lit the sets in an an amazing way,” the director gushed about his Director of Photography (DP).

“Mark, Bernie and David Bryan, who built the sets, created this whole world that just enabled me to have fun. Mark’s the top guy when it comes to underwater cinematography,” Roberts further noted.

The director stayed above water when he directed both installments of the ’47 Meters Down’ franchise, and Silk was underwater. While the DP didn’t have any equipment with him underwater that allowed him to communicate with Roberts, but a speaker was installed in the water, so that the director could communicate with the cast and crew. “So we share this slightly psychic connection with each other. It’s a really good relationship, and I love working with Mark,” the filmmaker also disclosed.

Further speaking of working with Bryan on creating the production design for the sets, Roberts then revealed what it was like to build environments that would be able to sustain being submerged underwater for the entirety of the shoot. “It was super tough to do that. The scale of what we did with the underwater sets for this film has never been done before,” he admitted. “It was a real problem, and we questioned what we were doing, since no one has really done this before.”

In addition to the visual aspects, the ’47 Meters Down’ series thrives on its musical choices. The helmer noted that he’s “always very hands on with the music side of things. tomandandy did the score for the first movie, and we really wanted something different for this film. They came out with a great score with all the organs, which we found really worked well inside the temple. The cave also needed to have a personality to it. We wanted a sort of Italian horror vibe, and we just went crazy with it. I love the end result!,” Roberts exclaimed.