One of the most difficult things many people have to learn to contend with in life is the consequences of the sacrifices they’ve made in order to get what they want. That’s certainly the case for actor Ezra Dewey’s young protagonist of Dylan Jacobs in this year’s horror thriller, ‘The Djinn.’

RLJE Films is set to distribute ‘The Djinn’ this Tuesday, January 4, 2022 on Blu-ray for an SRP of $28.96 and DVD for an SRP of $27.97. The drama’s disc release comes after IFC Midnight distributed the drama in theaters, On Digital Rental and on VOD on May 14.

In honor of ‘The Djinn’s home release, ShockYa is offering three lucky winners a Blu-ray of the feature. To enter, email us at ShockyaGiveaway@aol.com. Let us know that you’re entering to win the ‘Djinn’ Blu-ray giveaway in the email’s subject line, and include your mailing address in the message. You have until next Friday, January 7, 2022 to enter, and you can enter the contest once daily. On January 7, we’ll pick the winners at random, and notify them through email. Good luck!

The movie was co-written and co-directed by David Charbonier and Justin Powell (who also penned and helmed another horror thriller together, ‘The Boy Behind The Door,’ which was premiered on Shudder in July). In addition to Dewey, ‘The Djinn’ also stars Rob Brownstein (‘The Young and the Restless’), Tevy Poe (‘Redwood Massacre: Annihilation’), Donald Pitts (‘The Secrets We Keep’) and John Erickson (‘Sexually Frank’).

‘The Djinn’ follows Dylan, a young mute boy who finds a book of spells in the closet in his family’s new apartment when he’s left home alone by his father, Michael (Brownstein), as he goes to work one night. Blaming himself for the recent death of his mother, Dylan summons the titular djinn from the spell book to grant one wish. But he must survive the terror-filled night at the hands of the sinister creature to fulfill his heart’s greatest desire: to gain the ability to speak. 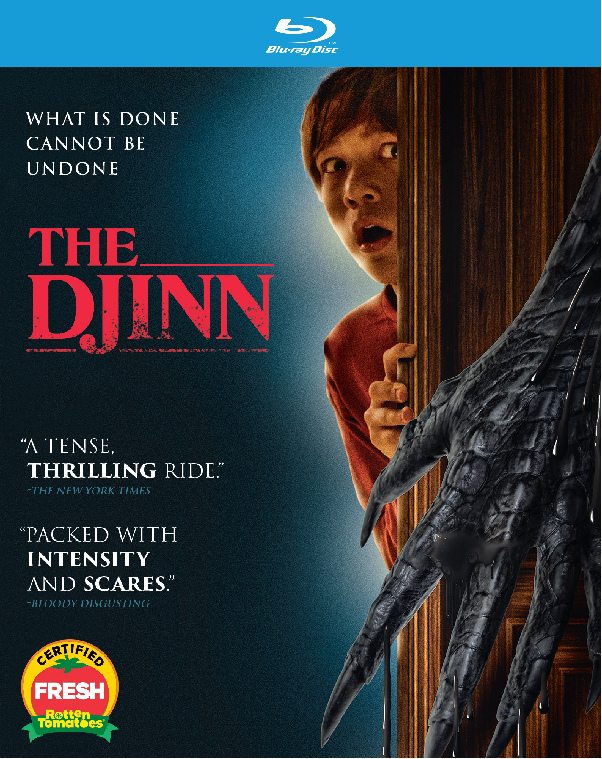