Actress Andrea Sweeney Blanco and her attackers are fighting for their lives before time runs out in the upcoming horror thriller, ‘Evil at the Door.’ The home invasion movie showcases how the members of a secret guild are intending to have fun with their targeted victims in the house over the course of a few hours. However, Blanco’s character of Liz proves to be a worthy opponent for her potential attackers, as she’ll take any means necessary to stay alive before their time frame of terror is over.

‘Evil at the Door’ is set to be distributed on the Terror Films Channel next Friday, January 21, and will then open in a wide VOD release on the following Friday, January 28. In honor of the drama’s distribution, ShockYa is premiering an exclusive clip from the feature, which is titled ‘Liz is Trapped.’

In the clip, Liz is targeted when three of the guild members, who are dressed in black hoodies, pants, gloves and terrifying masks, enter the house’s bedroom. She hides under the bed as they search the room for her, without saying a word.

‘Evil at the Door’ centers around a secret guild that has operated for nearly a century, known as The Locusts. Once a year the guild treats its members to a night of curated home invasions called runs, which are also known underground as The Night of the Locusts.

With 180 minutes to do as they please with the occupants of the selected home, four masked men enter the home of Daniel and Jessica (O’Neill and Doench) and begin to engage in sick, twisted games with them. Unbeknownst to the intruders, however, Jessica’s younger sister, Liz, is hiding under the bed. While the run time winds down, Liz plots her escape as The Locusts realize there is a traitor in their group. She ponders if the division amongst the intruders will be enough of a distraction for her to survive before The Locusts’ clock runs out. 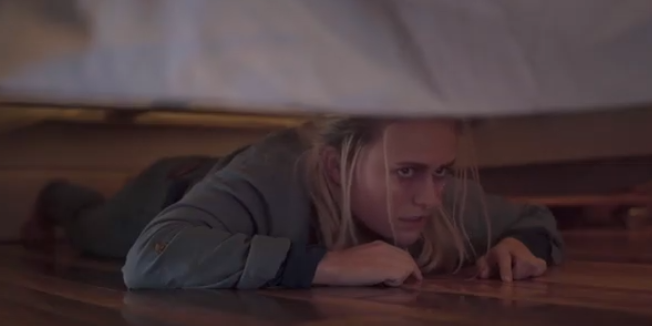 Title
'Evil At The Door' - 'Liz is Trapped'
Description