Protecting the fountain of youth is a powerful motivator for dark forces to kill anyone who threatens their way of life. That’s certainly the case for the supernatural entities in the new horror thriller, ‘Warhunt.’ The film’s antagonistic coven of witches is determined to stop a U.S. military squad, which led in part by actor Jackson Rathbone‘s character of Walsh, a trained specialist-expert, from destroying its secret of immortality.

‘Warhunt’ is now playing in theaters and On Digital and Demand, courtesy of Saban Films. The drama was directed by Mauro Borrelli, who also co-wrote the script with Reggie Keyohara III and Scott Svatos.

‘Warhunt,’ which is set in 1945, follows a U.S. military cargo plane as it loses control and violently crashes behind enemy lines in the middle of the German black forest. Ruthless American Major Johnson (Mickey Rourke) immediately sends a squad of his bravest soldiers on a rescue mission to retrieve the top secret material the plane was carrying.

Led by Sergeant Brewer (Robert Knepper) and Walsh, the soldiers venture deep into the forest near the crash site. They soon discover hanged Nazi soldiers and other dead bodies bearing ancient, magical symbols. Suddenly their compasses fail and their perceptions twist. As a result, straying from the group, leads to profound horror as they’re attacked by a powerful, supernatural force. Fighting for the dainty and struggling to survive, they must uncover the shocking truth behind the force before the Nazis do, and do everything they can to remove all evidence it ever existed, even at the cost of their own lives.

Rathbone generously took the time recently to talk about starring in ‘Warhunt’ during an exclusive interview over the phone. Among other things, the performer mentioned that he was in part inspired to take on the role of Walsh because Rourke and Knepper were already attached to star in the movie, and he wanted to appear alongside such strong screen presences in the feature. Rahtbone also noted that he enjoyed working on the thrilelr with Borrelli, as he was passionate about the story and character, which are grounded in the realities of war.

The conversation began with Rathbone explaining why he was inspired to play Walsh in ‘Warhunt,’ and how he became involved in starring in the project. “I was offered he character of Walsh. They sent me the logline for the movie, which said: ‘World War II soldiers go behind enemy lines in Nazi-occupied Germany, and they have to fight Nazis and a supernatural force,'” he shared. “They also told me that Mickey Rourke and Robert Knepper were attached, and that excited me.”

Further speaking about Rourke and Knepper, Rathbone then delved into what his experience of collaborating with them was like during the production. “I got to work very closely with Robert Knepper over the course of the two months that we made this film. He’s a phenomenal screen presence, as well as a great human being,” the actor gushed about his co-star.

Knepper “was an absolute joy to work with and learn from (on set). We had a lot of good chemistry, and we were great friends behind the scenes. But on camera, we got to be combative with each other, so it was a pleasure” to work with him, Rathbone added.

“Then with Mr. Rourke, sadly enough, because of the pandemic, we had to shoot our scenes separately. So I had to film my (side of our) scenes with his stand-in, and reversely, he had to film his (side of our) with my stand-in. So we didn’t ever get to share a single room together,” the performer revealed.

“But the editor and the producers did a great job on splicing us together in the end product – you really can’t tell” the duo didn’t shoot their scenes together, Rathbone added.

Upon receiving the script for the film and accepting the role of Walsh, the actor began preparing for his portrayal of the character. “I wanted to make sure that there was a certain groundedness to the character, in a sense of there being an attachment to reality. There’s the truthfulness of the realities of war. Then with the supernatural horror, I didn’t want it to stray too far into camp or into a different film, performance-wise,” he stated.

“We were trying to make an entertaining film, first and foremost, one of escapism. I just had a lot of fun playing this serious character we learn a lot about over the course of making the film,” Rathbone also noted.

The performer then delved into what his experience of working with Borrelli as ‘Warhunt’s co-writer-director was like during shoot. “Mauro’s a very interesting Italian man,” Rathbone shared with a laugh. “He’s a great guy and very passionate about history, and he has a background in illustration. So he had a great grasp of the film’s visual style.

“When it came time for the internal composites of the film, it was one of those things that we didn’t always see eye-to-eye, and we had to make compromises. But that’s what making a film is about; you make compromises and try your best with the materials given, and hopefully make something that entertains people,” the actor added.

The majority of the drama is set in the German black forest, and was shot on location in Riga, Pokaini and Ligatne, Latvia. Rathbone then delved into what the experience of shooting ‘Warhunt’ on location was like during the production.

“It’s a beautiful location; Latvia is such a gem, and it’s an undiscovered gem for most of the world. I had no prior experiences with or knowledge of Latvia as a country (before signing on to star in the movie). But once I got there, I just fell in love,” the performer gushed about ‘Warhunt’s locations.

“I was able to bring my wife and three children with me. We had a great time on my days off, exploring the cities and countryside,” Rathbone shared.

“Then filming in the forest was a truly magical experience. I’ve been fortunate enough to have filmed in many magical locations, and Latvia is probably one of my top 10 locations I’ve filmed in,” the actor added.

With the thriller following Walsh and his fellow soldiers as they embark on the rescue mission to retrieve top-secret material in the forest, they must ultimately fight for their survival. Rathbone then delved into what the experience of creating the physicality for his role of Walsh was like during the production.

“I’ve been lucky enough that some close friends of mine are stunt performers. So on our off days, we train together; well, they train me, because I couldn’t really train them,” the performer admitted with a laugh.

“So I have a good background in, and understanding of, stunts. I know when I need to be doing them, and when I need to step aside and let the professionals do the falls,” Rathbone continued. “I have a great respect for that aspect of the industry.

“So I was able to bring a lot of my previous experiences in stunts to this film. I was also able to bring my experiences as a Southern, growing up around guns, and having a healthy respect for how dangerous they are, even when they’re props, to the set,” the actor also emphasized.

“That was one thing I fought for since day one – ultimate gun safety. We’ve seen how cutting corners can cause tragedy. So luckily, we had a great production team set in place for us, to keep us all safe. We were able to get through the film, as intense, quick-paced and dangerous as it was, quickly,” Rathbone added.

The performer also expressed his happiness that ‘Warhunt’ is now playing in theaters and On Digital and On Demand, and thinks the dual distribution is beneficial for this type of film. “I’m excited that the film’s out. Years ago, there was a taboo about Video On Demand releases, but I think that was unfounded, and a fearful component to it,” he noted. “But I’ve found some of my favorite films On Demand.

“We have busy lives; I have a family, so it’s hard to make it out to theaters to see every single film. Sometimes my wife and I prefer to put the kids to bed and stay home to watch a movie, instead of trying to find a babysitter for our kids,” Rathbone divulged.

“I think that’s how most of the world is now. We have the technology to watch the newest releases from anywhere around the world in the comfort of our living rooms. The prices of televisions have gone down drastically, so we can essentially have a cinematic experience in our own homes,” the actor pointed out. “I’m not trying to watch any epic films on my phone, but you could, if you wanted to.

‘Warhunt’ “is the level of film that’s a fun theatrical experience, if you want to go see it in theaters. But it’s also a fun one to watch as you cuddle up on the couch with someone you love, and be transported for an hour-and-a-half into the supernatural in 1945,” Rathbone concluded. 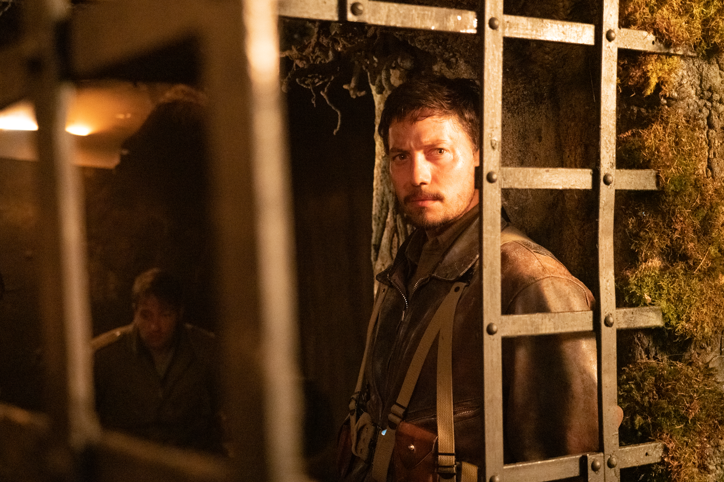