Dating for the first time in a major city like Seattle can be a bewildering process for many people, especially those who are unfamiliar and unaware about the painful experiences that others contend with on a daily basis. That’s certainly the case for both the titular character of Violet, as well as the man she begins dating, Shawn, in the upcoming romantic comedy, ‘The Sound of Violet.’

While there are many humorous moments that driven the overarching plot of the movie, its story powerfully showcases the true pain she experiences as a victim of human trafficking. She doesn’t feel as though she can overcome her circumstance of being forced to work as a prostitute until she meets Shawn, who’s living with autism. While he refuses to let his neurodiversity alter his positive outlook on life in his hometown of Seattle, he still struggles with finding his perfect soulmate and can accept him for who he is – until he meets Violet.

‘The Sound of Violet’ was written, directed and produced by Allen Wolf, who based the script on his 2021 award-winning novel of the same name. The comedy marks the feature film acting debuts of actor Cason Thomas and actress Cora Cleary, who both have a background in theater and lived in the Seattle area earlier in their lives.

In ‘The Sound of Violet,’ Shawn (Thomas), who’s desperate to find a wife, goes on one awkward date after another until he meets the captivating Violet (Cleary). He thinks he might be his soulmate, but his autism and trusting nature keep him from realizing she’s actually a prostitute. Violet realizes something is different about Shawn, and it’s not just because he has a condition that allows him to hear colors. As they grow closer, Shawn thinks he’s found a potential wife, while Violet thinks she’s found her golden ticket out of her trapped life.

Atlas Distribution Company will release ‘The Sound of Violet’ theatrically in more than 20 U.S. markets this Friday, April 29. In honor of the movie’s digital release, ShockYa is premiering an exclusive clip from the feature, which is titled ‘Sorry I Thought.’

Also in support of ‘The Sound of Violet’ release, Wolf, Thomas and Cleary generously took the time recently to talk about writing, directing, producing and starring in the comedy during an exclusive video interview over Zoom. Among other things, the filmmaker, actor and actress discussed what inspired Wolf to pen the screenplay, and how he later went on to balance his helming and producing duties throughout the movie’s production. Thomas and Cleary also shared what elements of their respective roles, as well as the overall script, convinced them to star in the comedy, and what their experiences were like of working together on building their characters and their relationship. 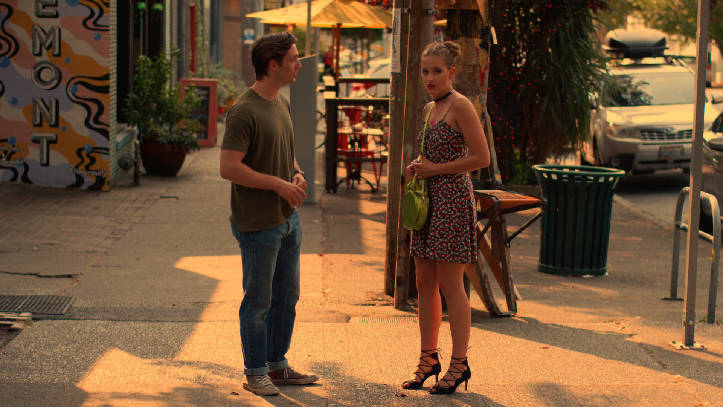