Blu-ray Review: Who We Are: A Chronicle of Racism in America

“The past isn’t dead — it’s never even the past,” once wrote Tennessee Williams. His words were meant to illustrate the manner in which we are often held down and held back by the weight of all the grudges and regrets we can’t individually leave behind, yet the phrase also serves as a suitable encapsulation for almost any discussion of race in America, where present-day agreement on even basic and at one time immutable historical facts seems sadly impossible. It is against this backdrop that the invaluable Who We Are: A Chronicle of Racism in America, a nonfiction surveying of anti-black discrimination and its roots in slavery, sees release. 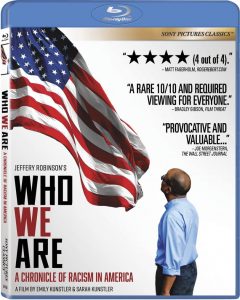 Directed by Sarah and Emily Kunstler (the daughters of famous civil rights attorney William Kunstler), Who We Are presents a fleshed-out, filmic version of a traveling lecture given by Jeffery Robinson, former Deputy Legal Director of the National American Civil Liberties Union. In this regard, the movie it most recalls is inarguably the award-winning An Inconvenient Truth, which alternated back and forth between Al Gore’s PowerPoint presentation on climate change and the looming environmental catastrophe and his travels which reconnected Gore with various touchstone figures from his personal and professional life.

If its subtitle makes the movie sound perhaps overwhelming and too unwieldy, the success of Who We Are lies in its ability to split the difference between the big and small, rendering it a didactic work with a consistent, singular human heartbeat. Yes, the film touches upon significant historical incidents like the 1915 Tulsa Massacre and the 1955 lynching of Emmett Till, as well as many others. But it manages to make these seem not like relics of a bygone past, unconnected to modern day, but rather signposts along a road to a still-troubled present, incidents which reflect a portion of the make-up and character of this nation.

Central to this is Robinson’s personal history, and segments of the film which find him reconnecting with childhood friends. These engaging and affecting stories — including one, newly uncovered, involving his parents’ creative use of white friends as window dressing to secure a new home in a favorable school district — ground the movie. They also help illustrate racism to be not merely personal prejudices, but an instrument of social power and legal authority. By highlighting the difference between the letter of the law and the actual lived experience of Robinson (self-admittedly much more fortunate than many other African-Americans), Who We Are appeals to the better angels of viewers who perhaps have not much grappled with what systemic bigotry actually means.

In a very clear, cogent manner — passionate but controlled, never hyperbolic — Who We Are also exposes the historical playbook of controlling the future by way of manipulating the past, and erasing its most ghastly stains and uncomfortable truths. In doing so, it throws a klieg light on the motivating impulses behind panicked, man-the-cultural-barricades-type attacks on “critical race theory,” to give but one current example. The stark laying bare of this white fragility is something to behold, and perhaps somewhat unpleasant for a majority of the movie’s dominant-ethnicity viewers. It nevertheless feels like the right tack — a mild and necessary form of confrontation for a country which has too long avoided having the type of conversations of reconciliation that are needed if we are ever to square the myth of our founding with the reality of its air-quote equality. This is a film which implores its audience to consider the evidence in front of its face, to sit with the embarrassment, nervousness and shame, and not turn away from the call of history.

Who We Are comes to Blu-ray presented in a standard case, in a 1080p high-definition transfer which more than adequately handles the straightforward visual demands of this project. Presented in 1.85:1 widescreen with an English language DTS-HD master audio 5.1 audio track that rightly foregrounds the dialogue-driven mix, plus optional English SDH, French and Spanish subtitles, the Blu-ray also features a two-minute trailer of the movie.