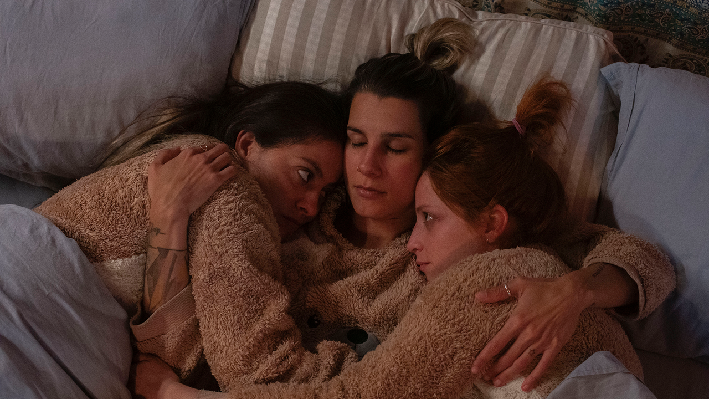 All relationships don’t look the same. The specifics of a particular arrangement may feel foreign to some and make them think they have nothing in common with its members. But, in most cases, there are universal elements true to all interpersonal dynamics, which may become strained if circumstances change and new challenges are faced. The test of the strength of any relationship is how people act and get through those tough times. Petit Mal showcases a throuple whose participants must navigate a different landscape and figure out how they can truly relate to one another.

Laia (Ruth Caudeli), Martina (Silvia Varón), and Anto (Ana María Otálora) live together and enjoy an idyllic life, spending their days in their large, beautiful house and backyard. When Laia leaves on a lengthy work trip, Martina and Anto are left alone. They soon realize that Laia was the connective element in how they interact, and the strain of not being able to consistently speak with Laia, whose phone service is limited and whose work colleagues serve as a distraction, only adds to the pressure of having to try to get along. Without Laia to be a bridge, Martina and Anto learn to truly see each other, transforming the way in which they both are around Laia when she eventually returns.

Petit Mal immediately establishes the intimacy and warmth of this three-way relationship, and it’s easy to see the closeness they all have. There are also hints at weak spots even before Laia leaves, when one member feels left out by the other two, which only start to show more once she is gone. The fact that Martina is busy working on an assignment and Anto isn’t also makes things unequal, and creates opportunity for tension when there need not be any.

What makes Petit Mal work exceptionally well is the quality of its performers. Varón and Otálora both display a mixture of confidence and vulnerability that come out in particular moments, and they each find different situations that make them more comfortable and prone to take the lead. Caudeli, who also serves as director and screenwriter, definitely feels like the alpha of the trio, and that makes it all the more captivating to see her assume an altogether different role when she’s the one who’s far away, even if it’s arguably as a result of her own doing.

It’s distinctly possible, and even likely, that there are some movie-going audiences that will be turned off by the idea of considering a relationship with three people in it as legitimate. While the point of this film’s existence is not to prove that it is, it’s remarkable how much it manages to establish the universality of all romantic and human groupings. The emotional connection and passion that these three share contains the same kind of highs and lows that are part of any more traditional heterosexual two-person coupling, and this scenario only further spotlights how those can be alternately affirming and detrimental for longevity.

In addition to Caudeli’s previously noted roles on the film, she also serves as editor and executive producer with Varón, whose character Martina is working on her own film, a humorous meta interpretation of the kind of part that Varón played in the creation of this project. But that’s also highly informative for what this movie is, one that unites three formidable actresses and gives them the chance to truly bring their characters to life, which they do momentously. This film is poignant, inviting, entertaining, and resonant, and it’s hard to shake its emotional impact after its relatively short but effective eighty-nine-minute runtime.