One of the most unnerving realizations people can have in life is that the links that are meant to physically and emotionally connect them with their communities can often times become the things that divide them. That’s certainly the case for actress Juliette Binoche‘s character of Sally in the new thriller, ‘Paradise Highway,’ in which she takes on a trucking job across state lines to protect her brother. But once she discovers that the truck’s cargo is actually a young woman, Sally begins to understand that those people who are the most vulnerable and need protection are often the ones who have become detached from society.

‘Paradise Highway’ follows Sally (Binoche) as she sets out to save the life of her brother, Dennis (Frank Grillo). In order to do so, she reluctantly agrees to smuggle illicit cargo: a girl named Leila (Hala Finley). As Sally and Leila begin a danger-fraught journey across state lines, FBI operative Gerick (Freeman) sets out on their trail, determined to do whatever it takes to terminate a human-trafficking operation — and bring Sally and Leila to safety.

Gutto generously took the time recently to talk about scribing and helming ‘Paradise Highway’ during an exclusive interview over Zoom. Among other things, the filmmaker discussed that she was in part inspired to pen the script because when she was a teenager, she discovered that trafficking was happening in her hometown, and the experience has stayed with her into adulthood. She also mentioned that she feels she made the right decision in casting Binoche as Sally, as the actress was committed to bringing the character’s emotions to the screen.

ShockYa (SY): You wrote the script for the upcoming thriller, ‘Paradise Highway.’ What was your inspiration in penning the screenplay for the movie, and what was the scribing process like for the feature? What was your research process like into human trafficking?

Anna Gutto (AG): There are many things that came together to write the script. When I was a teenager, it turned out that there had been a brothel in my friend’s building. This was not a bad neighborhood…so it really shuck me to realize that had been going on right under our noses. That was many years ago, but it stayed with me.

Later, when I moved to New York, after I lived in Indiana for a year, I realized how prominent trafficking really is in our society. That realization made me want to do something about it. Obviously, since I’m a storyteller, it meant that I had to find a way to tell a story.

I wanted it to be about someone who managed to get out of trafficking because it’s one of the topics that people don’t want to deal with. It’s so painful to think that this is happening that people would rather not talk about it.

Now, it has become quite prominent in the media. But when I started writing the script, which was almost 10 years ago, there was much less discourse about this topic.

So I started the script from there. I then started researching female truckers, and I would be on these conference calls, where I could have these conversations with them. They would be all over the continent, and I would be in my apartment in New York. Hearing their experiences started this whole world for me.

Then on top of that, during the middle of this process, I was having my first child. That created a deeper depth to this trucking character and the relationship with this young girl. It really became this mother-daughter relationship, with the fears and joys that that entails. There were many elements that brought that together.

Since then, the script went through about 10-15 page one rewrites and I don’t know how many rounds of revisions. I was always inspired to do them because I always felt like there was more to find, until the end, when I felt like it’s now where it needs to be.

So it was a long process writing it, and there was a lot of research that was entailed in it. The FBI agent I had on board to consult me in trafficking and trucking helped me immerse myself in all of these things, so that I would really know the environment and issues I was writing about.

SY: Besides writing the screenplay, you also made your feature film directorial debut on the drama. How did penning the script influence your helming approach on set? How would you describe your overall directorial style throughout the production?

AG: That has many facets to it. The research that I did while writing the script helped me learn about this environment so well by the time I started directing this movie. That gave me a confidence because by that point, I really knew about the world.

When the film was done, we showed it to a few different trafficking advocacy organizations. Their approval and support for the finished film has been some of the most important things to me.

The research part of really knowing about trafficking in general, as well as the characters and their environments and jobs, was essential to directing the movie.

My main reasoning for transitioning from the theater, which I did before, and into film is that I’m a very visual director. So a lot of the directing work for me is about really finding the visuals and approach to working with them for this particular story and these characters.

I did a lot of that work with the cinematographer, as well as with my production and costume designers, and then later with the composer and editor. This is not my move; this is the movie of everyone who worked on it, from the PAs (production assistants) to the creative team and crew, including the gaffers and grips; everyone created this movie together.

AG: Juliette was the first one to come on board. Once she signed on, it became easier to find the other actors because she’s an incredible force. She’s an incredible actress who I think a lot of actors want to work with because of her reputation. So it was remarkable to get her on board, and once she was, it was incredibly clear how perfect she was for the character of Sally.

For Hala, the girl who plays Leila, there was quite a long process before we cast her. We worked on that casting for over a year. There were some other very strong contenders, but Hala ended up being the one who was really right for this role. She’s remarkable talented, and she’s going to be discovered as a huge star.

Then obviously, it was incredible to get Morgan Freeman on board. He wanted to be in this movie and be so prominent in the film, which was wonderful.

Cameron Monaghan was also great to work with, and is a great actor. It was also wonderful to get Frank Grillo on board to play Dennis. Also, Christiane Seidel, who played Claire, and Walker Babington, who played Terrence, were also good to work with…So casting was a very good process, and I was also glad to find such great supporting actors in the region where we filmed in Mississippi.

SY: Once the actors were cast, what was the process like of collaborating with them to build their characters’ personalities and backstories?

Juliette’s an incredible actress; she does everything for real, and doesn’t cut any corners. She has her process, so with her, I felt it was important to be there with her for her process. I also tried to protect her time as much as I could, which is very hard on a movie because you feel like you never had enough time for the actors. So making the right priorities to make her shine was a big part of the work.

All of these actors were really wonderful to work with; I had a good experience with all of them, and they really dug into their characters. So the work with the actors, like with everybody, was really collaborative. 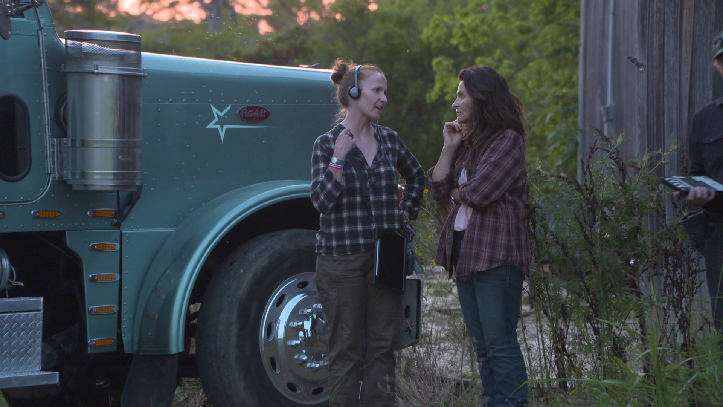