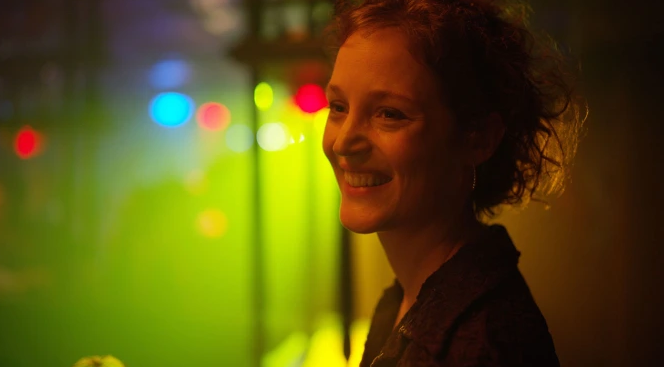 One of the most enigmatic films you’ll see this year is a cerebral and just occasionally emotional journey of a woman who has left her family (or is she imaging it?). Or maybe her husband has left her (whether by fleeing or through his death). Directed by one of France’s greatest actors, Mathieu Amalric—who perhaps would be better off out of the director’s chair to concentrate on spellbinding movies such as “The Diving Bell and the Butterfly,” where he performs as a man whose paralytic illness is so severe even the most religious people would wish him the peace of death).

Adapted from a play by Claudine Galea which is perhaps illuminated more as a film that casts Clarisse (Vicky Krieps) in a state of reverie, Luxembourg performer Clarisse (Vicky Krieps) shows herself as a woman in action so briefly that if you blink while she is throwing playing cards around or when near the conclusion she is running full speed toward a scene of disaster, you will miss them.

Editor Francois Gedigier covers the woman’s journey into the French countryside or in her mind (take your pick) intercutting with looks at her husband Marc (Arieh Worthalter), her young child Lucie (Juliette Benveniste as an adolescent and Anne-Sophie Bowen-Chatet years later, and her boy Paul (Aurèle Grzesik as an adolescent and Sacha Ardillyh later).

The piano music is so good that you might wish Amalric would simply have us watch a concert by Clarisse’s daughter. Most bizarre are the subtitles—the normal ones that you expect to see if you do not know French and some that serve as a voiceover.

In French with English subtitles.