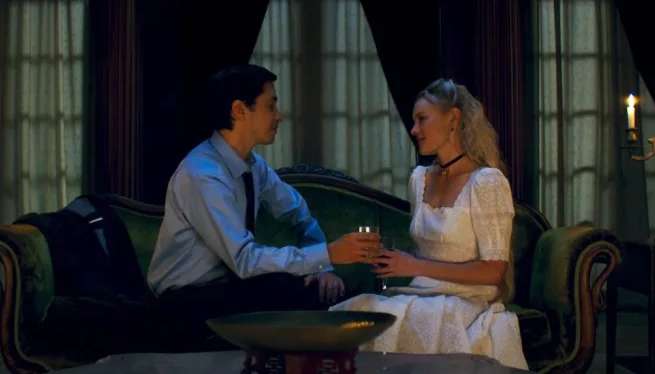 Men have taken advantage of women for decades. For centuries. And few male directors know this more than Neil LaBute. In LaBute’s “In the Company of Men,” two middle-management men toy with a deaf subordinate, a woman who feels so vulnerable that she wears headphones, pretending to be listening to music to avoid others’ awareness of her condition. But things happen during the sadistic game that the men play with the poor woman that ultimately results in poetic justice to the man.

Similarly in “House of Darkness,” a man, thinking that he is going to score big after he picks up a woman in a bar—or did she deliberately pick up him?–is hoist with his own petard. We know where this is going but there are a few surprises, a couple of jolts to break up a long conversation that he has with his intended hookup, to make this a cool ghost story.

“House of Darkness” is theatrical, a story that could easily be performed on an off-Broadway stage, but whose impact is not lost by the movie medium. The male character, Hap Jackson (Justin Long) meets Mina Murray (Kate Bosworth) in a bar expecting to get lucky, but the thrust of the story, so to speak, involves the halting conversation he has with the seductive Mina. There’s a class difference between the two. Hap works in finance and considers himself a “lower middle class public school” fellow. Mina owns a chateau which she says has been in the family for a while—quite a while it will turn out. The two sit by a fireplace, the room surrounded by lit candles, which come in handy because the light frequently goes out. Hap insists that he is not married, but then reveals that he is legally separated, which satisfies Mina who states that she had never walked the aisle. The conversation continues to be awkward, though they seem attracted to each other.

When Mina’s sister Lucy (Gia Crovantin) joins the couple, Hap falls into a trap by hitting on her, which to us in the audience might seem apropos given how Lucy seems easier to get to know. When you add that situation to a previous one in which Hap is overheard talking to a male friend on the phone, more than hinting that he going to screw Mina’s brains out, you get Mina’s motivation to get back at him: a symbol of toxic masculinity. Dread builds up. A third sister appears out of nowhere, the three women about to reverse what the men did in “In the Company of Men.”

If you’re a man, you may be reluctant to take a new female companion. However, the concluding moments are disappointing, coming out of left field and undercutting the whole idea that only guilty men deserve punishment or at least the belief that Hap deserves what’s coming to him. The flawed ending undercuts LaBute’s reputation as a class writer.