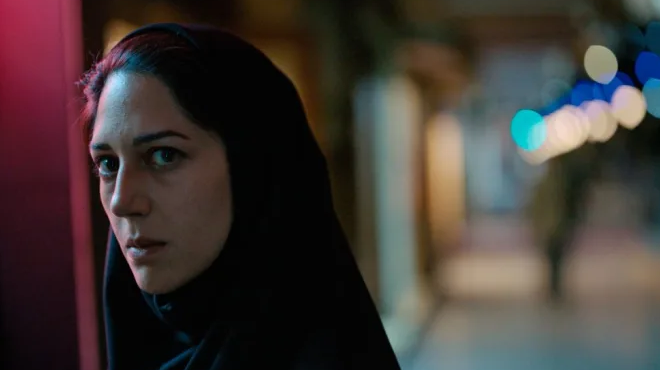 In discussions about former president Donald Trump, I have heard the argument that “you can’t blame him for lying, for racism, for sexism, for vulgarity.” Since the job of a politician is to be elected, Trump plays to his base. He personally may or may not believe everything he says. The real evil is within a country that houses and even encourages base emotions, sadistic impulses, and politics as pure entertainment.

The same might be said for Iran as brought out in the melodramatic “Holy Spider.” The film, from Iranian-born director Ali Abbasi—who studied filmmaking in Denmark and lives today in Copenhagen—dramatizes events that took place in the holy city of Mashhad from 2000 to 2001. The central character is a serial killer, Saeed Hanaei (Mehdi Bajestani), who when arrested testified that he was doing God’s work by cleaning up the prostitutes in that metropolis. Based on real events surrounding the murder by strangulation of sixteen women, “Holy Spider” appears almost to make a hero of the man, showing him as merely catering to the Iranian society’s religious fanaticism. As the director states in his Wikipedia article…

“My intention was not to make a serial killer movie. I wanted to make a movie about a serial killer society. It is about the deep-rooted misogyny within Iranian society…not specifically religious or political but cultural.” Therein lies a comparison between the Iranian culture and what passes for the culture of tens of millions of us here in the U.S.

Saeed Hanaei is a fifty-year-old who supports his wife, his son, and his young daughter as a builder. He would pick up hookers on his motorcycle at night and take them to his apartment with promises of opium, good food, and money. Locking the door, he would sneak up behind most of his victims and strangle them with their own hijabs. The scenes are gory: women turning red, gasping for air, trying to fight back as he would first leave them half dead, then kneel on them and finish the job with their own clothing. Critics and general audience would not be blamed for thinking that the movie, which ostensibly comes down hard on misogyny, is guilty of the same evil itself. Not for director Abassi and co-screenwriter Afrshin Kamran Bahrami is the custom of the ancient Greek playwrights who put violent action outside the set.

The film tries to convince the audience that there is nothing evil in what streetwalkers do; that they ply their trade because they know no other way to earn money and because they’ve been hooked on drugs by the culture of their social class. We sit in the theater audience wondering whether Saeed will be punished at all, or whether he will get away with a brief prison term or a series of lashes. He does appear to convince the court that he is doing the work of Allah and has the background of a near-martyr, having served on the front in the Iran-Iraq war.

Were it not for Ms Rahimi (Zar Amir Ebrahimi) a brave journalist, Saeed might have made good on his plan to murder two hundred women throughout Iran. Her method of entrapment sounds brave but also stupid. Based on her plan to play a prostitute and allow herself to be escorted to the killer’s flat, she could easily have become the seventeenth victim, with little hope of evading the stronger person’s grip while armed with just a pocketknife. At the same time that we may be surprised that Iranian society even allows a woman to be a crime reporter, we see how she is faced with aggressive males, including a top cop who traps her in her hotel and the manager of a small hotel that refuses to honor her reservation because she is a woman traveling alone.

With a stirring script and a director who knows how to ratchet up the tension, “Holy Spider” will appeal to both an audience that craves a murder story and one that reflects on how a killer can be created from a society in which women are better off than their gender in Afghanistan but remain second-class citizens. In the journalist’s role, Zar Amir Ebrahimi, who lives in Paris, became the first Iranian to win Best Actress at Cannes.

In Farsi with English subtitles.