It has been reported by TVMix, Hollywood Media Mogul Alki David has called on Congressman Steve Scalise to hold emergency Congressional Hearings on the FBI’s role in the “Tom Girardi State Bar Syndicate”. David emphasised to Scalise the immediate attention that this matter needs. 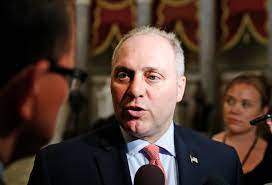 Recently LA Times broke the top news story, stating the Head of the FBI’s Los Angeles field office has formally recused himself from the federal investigation into fraud and corruption by Tom Girardi and others at his now-defunct law firm, an agency spokesperson confirmed.

David further added, sharing his ordeal “I have had my own run-ins with Girardi as well as corrupt members of the FBI’s Los Angeles field office like Brian Gilhooly and Shannon Biernek. These people have completely ignored and probably encouraged the break-ins to my home in Malibu.”

TVMix reporters further reported, David was distraught when he shared how he has repeatedly reported the unnatural and bizarre deaths of four of his lawyers. Rebecca Rini, Barry Rothman, John Quirk and Phil Kay. The deep corruption of the LA Sheriff’s office and that of the entire California Judiciary also as reported by the LA Times.

David added, “Mr Scalise was appointed to investigate these matters and we fully expect him and his team to meet with our Whistleblowers in the near future”.

David’s has very strong supporters and his supporters include actress Rose McGowan once the poster child of the MeToo Movement, who also has ongoing litigation against Governor Gavin Newsom and his wife. Hotelier Steve Wynn, rappers 50 Cent, Chris Brown and Boxing legend Mike Tyson also stand firmly behind David’s campaign to fully expose the Girardi Syndicate.

TV Mix also reported, “Gavin Newsom controls the State Bar of California through a proxy of all six seats on the State Bar. The Girardi mob has for a very long time, extorted the people of the great State of California.  The insurance liens scheme has completely corrupted every facet of the judiciary.”

David’s efforts to expose the Girardi Syndicate is replayed across social media.

It was also recently reported, David caught up with Allred in a random meeting outside Ralph’s Super Market in Malibu where both David and Allred reside. David vehemently accuses Gloria Allred of wrong doings and her relationship with Tom Girardi, that goes back decades when both attended Loyola Law School in Hollywood CA.

Watch Alki Davis Expose Gloria Allred in the above video