Interview: Paul Rudd Talks About His Role in Prince Avalanche

Truly embracing the assorted emotions that form in every situation, whether taking on a sensible outlook while forming a new relationship with someone less able to contend with serious situations, or adding witty comic relief in a tense situation, can be difficult for an actor. But Paul Rudd is one of the talented performers who can instantly take on the challenge in any film he appears in, whether his new independent comedy-drama, ‘Prince Avalanche,’ or his anticipated upcoming comedy sequel, ‘Anchorman: The Legend Continues.’ Between relying on inspiration from some of his favorite comics, including Steve Martin, and improvising and experimenting with his co-stars on the set, Rudd has proven his talents to easily adapt to the diverse films he has appeared in.

‘Prince Avalanche’ follows mild-mannered Alvin (Rudd) and juvenile chatterbox Lance (Emile Hirsch) as they’re hired to spend the summer of 1988 repainting a highway in a fire-damaged Central Texas forest. By day they work on the road, and in the evenings they set up camp in the forest and banter by the fire. The isolation quickly wears thin on Lance, who yearns for a life of partying and women. Meanwhile, Alvin revels in the serenity of the setting and writes love letters to his girlfriend back home. While the two initially lack common ground, an unlikely friendship slowly emerges from the mutual annoyance. A truce is reached, and the two begin to realize they could actually learn something from one another.

Hirsch generously took the time recently to participate in a roundtable interview at the Crosby Hotel in New York City to talk about ‘Prince Avalanche.’ Among other things, the actor discussed how even though he’s not a method actor, Alvin’s gentle personality stayed with him, even after the film was finished filming; how he enjoyed Green’s creative and sensible filmmaking process on the set, and how he allowed the actors to experiment with their lines and scenes on the set; and how he’s happy and surprised to be a part of so many studio and independent cult classic films, including the ‘Anchorman’ series and ‘Clueless.’

Question (Q): When you get into a role, do you ever have difficulty getting out of it?

Paul Rudd (PR): I’m not a method actor. That just sounds kind of exhausting, but I do find that something happens innately where something ends, it’s kind of tough to shake. The character seems to seep into your skin a little bit.

For this role I didn’t shave my mustache right away, even though I didn’t want a mustache. It seemed weird not having a mustache after having it. I don’t flip the switch. There is a slow turning of the faucet until finally it just all stops. I don’t think it’s ever a conscious thing.

Q: This character was very alienated and isolated. How was that afterwards?

PR: I did feel lonely. In some ways it does just happen. I wonder if it’s an inevitable thing. I did ‘Long Days Journey Into Night,’ which is the saddest play ever written, and I did it for five months. I wanted to slit my wrists, and I went into it being completely naive thinking, “This is going to be a blast!” It was fulfilling, but it did affect my mood.

On the other hand, in ‘My Idiot Brother,’ I was playing a character that just saw the positive in everything, and I loved it. After it ended, I just wanted to wear hippy dippy clothes. I didn’t want to shake it.

Q: You’ve played a lot with different hairstyle and facial hair for most of your roles. Does that help you get into character?

PR: Yeah, it does kind of inform a little bit to work externally. You just feel different. With Alvin, I felt a mustache seemed right. It’s 1988, so you get a little bit of freedom to not look totally period. But I still don’t think of it as a period film because I remember 1988. (laughs)

I was very self-conscious about the mustache and didn’t want to make it hipster. I wanted to get big, round Sally Jesse Raphael glasses too.

Q: But the glasses weren’t red!

PR: They weren’t red! (laughs) I wanted a little more Roger Ebert for this film. It wasn’t a crazy look, but it made me feel different. You move differently. The shoes I was wearing, the glasses and the mustache changed in subtle ways the way I just feel. That starts to inform the character.

Q: You also have the ‘Anchorman’ sequel coming up. Are there any details you can discuss about the movie?

PR: We just finished filming, and that comes out in December.

Q: That must have been fantastic to shoot.

PR: It was fan-TANA-astic. I’ve never said that before. But yeah, it was a blast! It was surreal because it had been nine years (since the original was released).

Q: Did you think at the time that you would do a sequel?

PR: I don’t know. There were times where I thought maybe that was going to happen, and times where I didn’t. I never would have guessed it when we were shooting the original. Nobody was paying us any attention at all, nor should they have been, but I was very aware of the interest and the fan base that it was developing over the years that followed.

There have been a number of questions I would get asked during press junkets for other films, so I knew that it was discussed. Then we all talked about it, but it never seemed to work out. When it finally did work out, it was kind of surprising.

Q: You seem to be a key member in a lot of cult movies.

Q: You seem to have a natural humor. Who makes you laugh in your life and in films?

Q: Is there a role that’s the most memorable to you?

PR: I did a film called ‘Wet Hot American Summer,’ that was a really fun one to do. ‘Anchorman’ was really fun to play. I loved playing Peter Klaven in ‘I Love You, Man.’ I have a strong connection to all the parts I played because they all mean something to me.

Q: What did ‘Clueless’ mean to you?

PR: It meant a lot. It was exciting because it was one of the first things I ever did. I remember saying, “Oh my God, this is the Paramount lot. Those gates! This is a movie!” Then I said, “Look, there’s the girl from the Aerosmith video!” The whole thing was exciting, and I had no barometer to compare it to anything.

I had worked as an actor before that, but in some television stuff. I had done one other movie but it hadn’t come out. That’s another strange one. Someone just said, “Oh it’s the 18-year anniversary of ‘Clueless.’” It was a movie that I know meant a lot to a specific generation. I had no idea when I was shooting that, that it would mean that much to people.

Q: As opposed to shooting a big studio comedy, what was your experience shooting something smaller like Prince Avalanche?

PR: It was great because it was one hundred percent creative. There’s always a certain kind of pressure, but with this one, there wasn’t pressure. We didn’t even know if this was going to be released, and it kind of felt like an experiment. If something seemed interesting to us regardless of how it might fit into the narrative, we said “Well let’s do it.” It was bare bones.

It was a small crew. I really key in to David Gordon’s Green’s sensibility. I liked his aesthetic, and the way he works. It was a real charge. There wasn’t any rebellion towards working, like how some people have that towards studio movies. I’ve been very lucky in that I haven’t had that either way.

Q: Was the old woman a ghost in the movie?

PR: It was so cryptic. I’ll tell you one thing that was really interesting about her, is that she wasn’t an actress, and that was really her house. It’s an interesting thing in the movie because I also take some pills, and then it’s like, “Does he see her in the truck? Does he not?” In a way I almost thought that it’s not necessary for me to answer that question, even for myself. In that moment she’s there, and she’s real to me, and she might be real in the movie too.

They were location scouting, and they found this woman looking through her house that was decimated, and she was amazing. We filmed it and she was a lovely lady. Nothing was scripted for her. I just went in as the character, and started asking her questions, and trying to get her to talk and maybe give me a tour of her house, or talk about her feelings. She was so vulnerable, and it seemed as if every single word she said she was ready to cry. It was profoundly moving and amazing. That would never happen on something else.

Q: Your character talks a lot about the difference of being alone and being lonely. Do you think your character ever figured out where he fell on that slope?

PR: I think Alvin has a little bit more of a self-awareness by the end of it. I wonder if he knows exactly who he is, and why he does what he does. I think his eyes are opened to it a little bit. It’s a difference for sure. They’re two completely different things. I love being alone, and I hate being lonely (laughs)

Q: What do you like to do when you’re alone?

PR: There are a lot of answers for that question too (laughs) I love to listen to music when I’m alone. I love to just sit and listen to stuff, and I don’t do it as much as I used to. Sometimes I like to sit and think and try to meditate on things. It’s hard to do but if you get into the routine it gets a little easier. 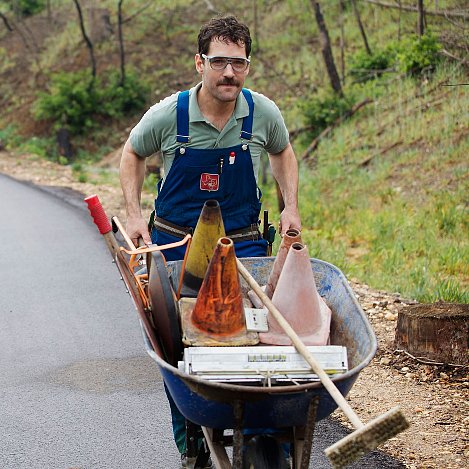