Trust Me, I’m a Lifeguard to Make a Splash at Tribeca Film Festival

The short romantic comedy ‘Trust Me, I’m a Lifeguard’ is set to make a splash with its World Premiere at this year’s 13th Annual Tribeca Film Festival in New York City. The film, which is being distributed by Trust Me LLC, was directed by Tony Glazer, and co-written by Tyler Hollinger and Christian Keiber.

“We couldn’t be more thrilled to have our World Premiere at The TriBeCa Film Festival. It is truly a great honor to be selected amongst some of the best and brightest film makers in the business. As New York City based film-makers it is an honor to screen in our hometown,” Hollinger and Keiber said in a joint statement about the premiere, particularly since the movie was shot by an-all local New York cast and crew.

‘Trust Me, I’m a Lifeguard’ follows lifeguards Sam and Murphy, who navigate their summer at the shore. Hollinger plays unlucky-in-love Sam, who’s determined to win back his childhood sweetheart. Keiber portrays the aquaphobic Murphy, who must face and conquer his fear of the water.

Hollinger and Keiber are in talks to develop ‘Trust Me, I’m a Lifeguard,’ which was filmed entirely on location in Stone Harbor, New Jersey, into a television series and a film franchise. The short film will be used to raise funds for a feature length version of the movie. Hollinger already has a full script finished, as well as ideas for a sequel. 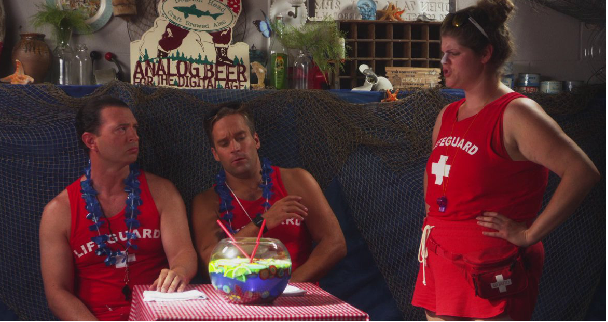