Unleash your inner Mick Taylor and let your laughter roar in the new ‘Wolf Creek 2’ Facebook contest. Fans of the anticipated horror sequel to the hit 2005 thriller, ‘Wolf Creek,’ can recreate the killer’s iconic laugh with the hashtag #LaughLikeMick on the new movie’s Facebook page.

The winner of the contest, which ends today, will win four tickets to see ‘Wolf Creek 2’ when it opens in theaters on Friday. The winner will also receive a signed poster from the follow-up. The entry with the most votes on their best Mick Taylor laugh wins.

RLJ/Image Entertainment released the horror thriller on VOD April 17. The sequel sees the return of ‘Wolf Creek’ actor John Jarratt, who reprises his role of Mick Taylor. The follow-up’s supporting cast includes Ryan Corr, Shannon Ashlyn and Philippe Klaus. ‘Wolf Creek 2’ was helmed by the original’s director, Greg McLean, who once again wrote the script, this time with Aaron Sterns.

‘Wolf Creek 2,’ which is set deep in the Australian outback, once again follows unstoppable serial killer Mick Taylor (Jarratt), who stakes out the isolated roads to look for tourists who’ve wandered off the trail. He finds two German backpackers, Rutger (Klaus) and Katarina (Ashlyn), a couple who set up camp in the title national park. He lures them in as his easy prey when he persistently tells them they’re camping illegally in Wolf Creek.

When Katarina makes her escape from the serial killer, she’s rescued by Paul (Corr), a British traveler who’s also exploring the Australian outback. When he picks her up off the side of the road to bring her to safety, Mick tracks him down and now sets his murderous sights on the man who interrupted his original targets. But the serial killer is surprised to have found a victim who’s loaded with smarts and knowledge of Australia’s history, and is easily challenging him at his own game. Mick eagerly brings Paul into his underground lair, and the killer’s latest victim has to think fast to outwit his captor in order to save his life. Paul quickly discovers just how unforgiving an opponent Mick can be in the process.

Watch the trailer for ‘Wolf Creek 2’ below. 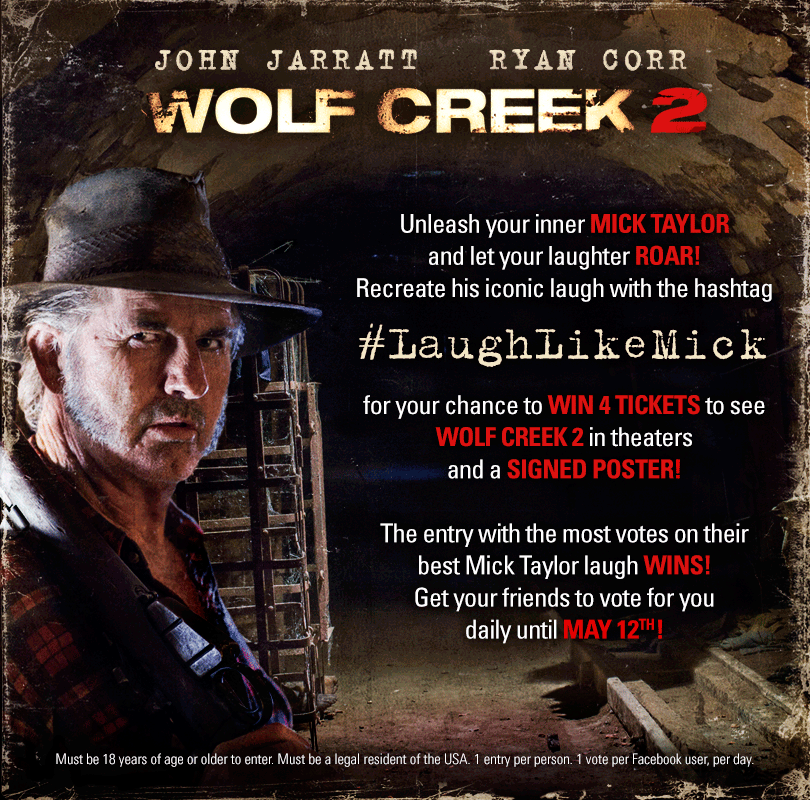