Struggling to find your true passion and calling in life can be a difficult challenge for young adults as they strive to create their own identity. Up-and-coming British film and television actress, Olivia Cooke, who started her career in several BBC mini-series in her late teenage years, has reverently overcome those obstacles of trying to determine what career path to follow by taking on a diverse range of roles. In her latest project, writer-director William Eubank’s sci-fi thriller, ‘The Signal,’ which is one of her first film roles, the now 20-year-old actress is proving to American audiences her natural ability to adapt to any character.

‘The Signal’ follows friends and MIT students, Nic and Jonah (Brendon Thwaites and Beau Knapp), who have become entangled in an online altercation with a hacker known as Nomad, who began causing trouble for them after he found his way onto their network and destroyed some servers. While driving Nic’s girlfriend Haley (Cooke) from Cambridge to Caltech, where she’ll be attending for a year, they get a lead on Nomad’s whereabouts. The two convince her to take a detour from their trip to track the hacker in the desert.

The three track Nomand’s location to an abandoned shack that holds signs someone was recently staying there. Before they can figure out what’s truly happening, strange things start to happen, they all lose consciousness. Nic, who’s coping with the early stage of MS, awakes in a sterile facility, and is unable to feel his legs.

While he’s unable to locate Jonah and Haley, Nic is tended to by silent workers in hazmat suits. The workers are led by Dr. Wallace Damon (Laurence Fishburne), who attempts to calm Nic’s anxiety. The only thing he’ll reveal is that Nic and his friends encountered an EBE-an extraterrestrial biological entity-that dangerous outside the facility. While Damon insist his secrecy is upheld for a good reason, Nic immediately becomes suspicious of him, and tries to break free to find Haley and Jonah.

Cooke, who has become known to American audiences for playing Emma Decody on A&E’s hit horror thriller series, ‘Bates Motel,’ generously took the time recently to talk about filming ‘The Signal’ during an exclusive interview over the phone. Among other things, the actress discussed how she was drawn to the role of Haley because she felt she was the heart and soul of the action-driven sci-fi story; how Eubank created a trusting environment between the cast and crew on set, in part by allowing the actors to improv and add dialogue they thought would make the characters more believable; and how even though she has always been interested in attending drama school, receiving her first lead role in this past April’s ‘The Quiet Ones’ on the same day she was rejected from the Royal Academy of Dramatic Art (RADA) in London positively shaped her career path.

ShockYa (SY): You play Haley Peterson in the new sci-fi thriller, ‘The Signal.’ What was it about the character of Haley, as well as the script, that convinced you to take on the role?

Olivia Cooke (OC): I think I was attracted to the fact that she felt like the heart and soul of the film. I also saw William Eubank’s first film, ‘Love,’ and I thought his script for ‘The Signal’ was mind-bending.

SY: Speaking of William, he both co-wrote and directed the film. What was your experience of working with William on the set, particularly since he also penned the screenplay?

OC: He wasn’t a stickler for the script. He’d be interested in what the cast had to say. Brenton’s Australian and I’m British, and William would let us say what we wanted and what felt comfortable to us. (laughs) He was really free, and he trusted us as much as we trusted him.

SY: Speaking of improvising on the set, do you feel that helped in developing your relationships with Brenton and the rest of the cast on the set?

OC: Brenton and I actually knew each other prior to starting the film in Albuquerque. New Mexico feels confined, so we were always together, and we became family for two months.

It’s not the most comfortable of places, just because I’m not used to the heat. We were in the desert, and sometimes I would be dying. But it did help in developing my character, because we felt isolated and claustrophobic at times, because there really was no escaping.

SY: How did you prepare for your role of Haley before you began filming? Did you do any research, or have any rehearsal time with your co-stars?

OC: We had a couple days of rehearsal. I also researched MIT and Caltech, which is the university Haley’s going to. But more so, when we got to the set, I really worked on finding who she was, particularly with the two other characters, in the rehearsals.

SY: Laurence Fishburne plays Dr. Wallace Damon in ‘The Signal.’ While many of his scenes were with Brenton, what was your overall experience of being on the set and working with him?

OC: Oh, it was awesome, as he’s such an icon. When you meet these people, they’re never how you expect. He’s so approachable, and spent time with us. He didn’t have to, since we’re newbies. But he was really lovely.

SY: What was the process of acting in the scenes with the stunts and action sequences? Were you able to shoot any of your own stunts while you were filming?

OC: They wouldn’t let me, so I was really pissed off! They let Brenton hang off the back of a truck, and run as fast as the speed of light, but they wouldn’t even let me go up in the wire rigs. So I was upset about that. (laughs) But I think they were just trying to look after me and stop me from getting injured.

SY: ‘The Signal,’ which is a high concept movie with big production value on a relatively low budget. What was the experience of filming the movie independently like for you?

OC: I’ve actually only done low budget films so far, so I don’t have any experience on big budget movies with massive crews. Every film has its different trademark and feel. This one felt like an extended family who you haven’t seen in awhile. You don’t see them for a reason, but they’re still you’re family. (laughs) We all had to pitch in and help each other, even if you didn’t like each other.

SY: ‘The Signal’ premiered at the 2014 Sundance Film Festival. What was your reaction when you heard the movie would be playing at the festival, and where you able to attend any of the screenings?

SY: Along with your portrayal of Jane Harper in April’s horror film, ‘The Quiet Ones,’ Haley is one of your first film roles. What have you learned about acting from these two roles that you’ll bring to your next projects?

OC: With ‘The Quiet Ones,’ it was a big shooting schedule for me, as I did a lot of stunts, and it was very physical for me. That helped me learn how to set the story for ‘The Signal,’ and support Brenton’s character’s journey. I also learned how to layer and compliment the other actors’ performances.

SY: Are you interested in staying in the sci-fi and horror genres, and make more films like ‘The Signal’ and ‘The Quiet Ones’ in the future? Or would you like to pursue other genres, as well?

SY: Besides movies you have also starred on several television shows, including ‘Blackout’ and ‘The Secret of Crickley Hall’ in England, and ‘Bates Motel’ here in America. What is it about television series that you enjoy acting on so much? How does appearing on television compare and contrast to making films?

OC: With the roles I did in England, they were so small, as they were mini-series. The two shows I did there were only three episodes each. So with those, I just dove into them.

Then I did ‘The Quiet Ones,’ and then I got ‘Bates Motel.’ With that show, it’s like a marathon and you’re in training. It’s harder to keep in character like that, and not continuously delve into new roles. But you want to keep getting to know about these characters, while getting bored with them, so you have to find that balance. So it’s definitely a work-out.

SY: You’re originally from Manchester, and you shot ‘Blackout’ and ‘The Secret of Crickley Hall,’ another supernatural thriller, in Britain. How does acting in Britain compare and contrast to filming in America? Are you interested in doing more roles in England?

OC: Yes, I’d love to go back to England and work there again. But now that I’m two-and-a-half years into my career in America, it can be difficult to find a role that would bring me back to England.

While filming the two mini-series I did for the BBC, I was so young and inexperienced. But I remember how much the crews in Britain, and not to say they don’t in America, but British crews love the craft so much. They’re not getting paid as much as they are in America, so they’re really doing it out of their love and passion for film and TV. It’s such a lovely atmosphere to be involved with, as everyone’s such a team player. There aren’t any egos or hierarchy; everyone chips in, so it’s a lovely atmosphere. Filming there also means I’m two hours from home, which is good.

SY: Being early in your career, like you mentioned, how did you come to realize you wanted to become an actress?

OC: I went to a drama workshop, called the Oldham Theatre Workshop, for nine years. So when I was 14, I got an agent, but my career didn’t get started right away. I didn’t get a film or television role for a few years.

But I always wanted to go to drama school. So when I played Christopher Eccleston’s daughter in my first BBC mini-series, everyone told me to continue auditioning for drama school. So when I was filming my second BBC mini-series, I was also auditioning for schools. On the day I was rejected from the Royal Academy of Dramatic Art (RADA), I got the lead in ‘The Quiet Ones.’

So that put me in this path, and I’m really grateful for it. I wouldn’t have been able to come to Los Angeles and travel America if I hadn’t been on this path.

SY: Having done films and television, are you interested in doing theater in the future?

OC: I’d love to, if I could take a year off to properly train, and get my body up to the standards of theater, and get used to the physicality. But until then, I’m really enjoying doing films and TV. I’ve learned so much so far, but I still have so many things to learn.

SY: Are there any actors or filmmakers you’re interested in working with, either in America or in England?

OC: I really love Tim Burton, and it’s been one of my dreams since I was a child to be able to work with him. I’ve been obsessed with his work!

SY: Besides ‘The Signal’ and ‘Ouija,’ do you have any other projects lined up you can discuss?

OC: I’m finishing some reshoots on ‘Ouija,’ and then I’m going to Pittsburgh to shoot a comedy, called ‘Me & Earl & the Dying Girl.’ 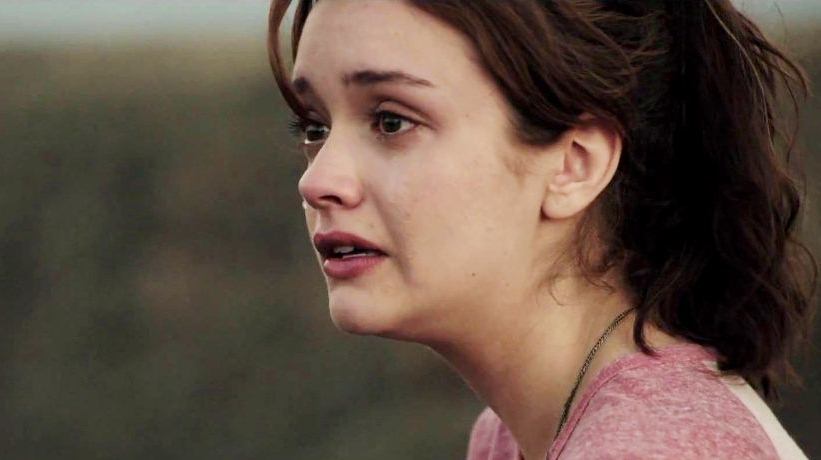