Captivatingly proving that you’re completely worthy and able to physically and mentally protect not only yourself, but also your allies during an all-important and stressful time, is one of the most imperative aspects of being a capable and proficient leader. But willingly putting yourself into harm’s way on a continuous basis in an effort to save and protect humanity, as you contend with your own emotional struggles, is also one of the most significant qualities of being a superhero. Writer-director Joss Whedon successfully proved once again that the superhero film genre doesn’t have to thrive on just stunning visual effects; it completely flourishes when the seemingly untouchable protagonists are also forced to contemplate their own emotions and motivations, and how they impact the people in their personal lives and the rest of humanity. That essential scrutiny is featured in his anticipated new sci-fi action adventure superhero film, ‘Avengers: Age of Ultron,’ the sequel to his hit 2012 Marvel Comics superhero adaptation, ‘The Avengers.’

‘Avengers: Age of Ultron’ follows the title superhero team-Tony Stark/Iron Man (Robert Downey Jr.), Steve Rogers/Captain America (Chris Evans), Thor (Chris Hemsworth), Bruce Banner/Hulk (Mark Ruffalo), Natasha Romanoff/Black Widow (Scarlett Johansson) and Clint Barton/Hawkeye (Jeremy Renner)-as they travel to the Eastern European country of Sokovia to raid the Hydra outpost led by Baron Wolfgang von Strucker (Thomas Kretschmann). The Avengers are determined to obtain the scepter used by Loki in ‘The Avengers,’ which Strucker is now utilizing in his experiments on humans. In the process, the superheroes encounter two of Strucker’s experiments–Pietro Maximoff/Quicksilver (Aaron Taylor-Johnson), who has superhuman speed, and his twin, Wanda/Scarlet Witch (Elizabeth Olsen), who can manipulate minds and throw energy blasts. The twins allow the team to apprehend Strucker and retrieve Loki’s scepter, which gives them extra insight into how the Avengers work, as well as further motive to launch warfare against them.

As Tony and Bruce begin examining the scepter, they discover its gem holds an artificial intelligence. After the discovery, Tony convinces Bruce to help him use the gem to secretly complete his Ultron global defense program, despite the scientist’s initial hesitance about not revealing their plan to the rest of the Avengers. However, Ultron (voiced by James Spader) doesn’t believe in Tony’s ideas, and decides to eradicate humanity in order to save Earth. After eliminating the superhero leader’s Artificial Intelligence program, J.A.R.V.I.S., Ultron escapes from the Avenger’s building with the scepter, and then uses the resources in Strucker’s Sokovia base to upgrade his simplistic body and build an army of robot drones. The title villain recruits the Maximoff twins, who hold a grudge against Tony for creating the weapons that were responsible for their parents’ deaths.

Ultron, Quicksilver and Scarlet Witch then visit the African shipyard base of arms dealer Ulysses Klaue (Andy Serkis) to obtain vibranium. The Avengers arrive to stop the deal between the criminals, but Scarlet Witch subdues the heroes with haunting visions and terrifying waking dreams that are rooted in their deepest fears. As the Avengers then begin to contend with worldwide backlash from the public over their actions, as well as the doubts and fears Scarlett Witch’s hallucinations have caused, the team then goes into hiding at Hawkeye’s safehouse farm, where they meet his wife, Laura (Linda Cardellini), and their children. Nick Fury (Samuel L. Jackson) arrives and encourages the team to form a plan to stop Ultron, who traveled to Seoul and is forcing Bruce’s friend Dr. Helen Cho (Claudia Kim) to use her synthetic tissue technology, the vibranium and the scepter’s gem to create a body for him. As a result, the Avengers determinedly work together to not only stop Ultron’s growing alliance with the Maximoff twins and his plan to build a body, but also halt the temperamental artificial intelligence’s drive to bring about global extinction.

Whedon intriguingly crafted the spellbinding dynamic between the title team of superheroes in his original ‘Avengers’ cinematic venture that enthrallingly explained how the group joined forces to protect the world together. However, the filmmaker masterfully infused ‘Avengers: Age of Ultron’ with more of an emotional backstory that powerfully drove the story’s action, stunts and special effects. The writer-director’s inspirational and inspiring second adaptation of Marvel Comics’ ‘The Avengers’ comic book series smartly balanced emphasizing the physical toll fighting Ultron and his allies has on the Avengers, as well as the emotional pain and dismay their part on the superhero team has on their personal relationships. From Clint’s strong connection with his wife and children, who he kept a secret even from the rest of the Avengers in order to keep them safe, to Bruce’s inability to trust his capability of physically and emotionally protecting Natasha in a romantic relationship, Whedon intelligently delved into how their work is truly affecting them.

Even though Whedon fascinatingly and rightfully incorporated the long-lasting emotional and mental effects the constant fighting and drive to protect the world from humanity’s enemies into the intense story that drives ‘Avengers: Age of Ultron,’ the action adventure sci-fi movie also thrived in its anticipated riveting visuals. With Iron Man and Captain America fearlessly leading the Avengers and their allies into battle against the title villain, the sequel, like its predecessor, mainly thrived on its choreographed fight sequences. Led by stunt coordinator Greg Powell, who previously crafted the stunts on such films as both ‘Harry Potter and the Deathly Hallows’ installments and ‘Pirates of the Caribbean: On Stranger Tides,’ the action-driven sequences ‘Avengers’ follow-up powerfully emphasized how the title superheroes were skillfully able to adapt to fighting in any setting and circumstance. Whether fighting against Strucker, the Maximoff twins and the rest of their team at the Hyrdra outpost in the beginning of the film, or relentlessly pursuing Ultron in the superheroes’ headquarters in New York, throughout Sokovia and around the world after he escapes with the scepter, Powell interestingly crafted unique battle sequences that effortlessly showcase the Avengers’ ever-evolving strengths and abilities.

‘Avengers: Age of Ultron’ is a masterfully crafted sequel to the critically acclaimed and third largest box office grossing film of all time, the equally visually intense ‘The Avengers.’ While the original sci-fi action adventure film enthrallingly drew audiences into the title superheroes’ world by alluringly explaining how the group began working together, and determined how to better their alliance as they fought to save humankind for the first time, the new sequel also compellingly incorporated the protagonists’ humanity into their battles. As Powell expertly crafted riveting stunts for the follow-up’s alluring battles between the Avengers and Ultron as they fought over Earth’s future, Whedon effortlessly also highlighted the relatable emotional struggles the protagonists continuously contended with, proving they’re the right team to protect mankind, as they have maintained their own humanity throughout their time fighting as superheroes. 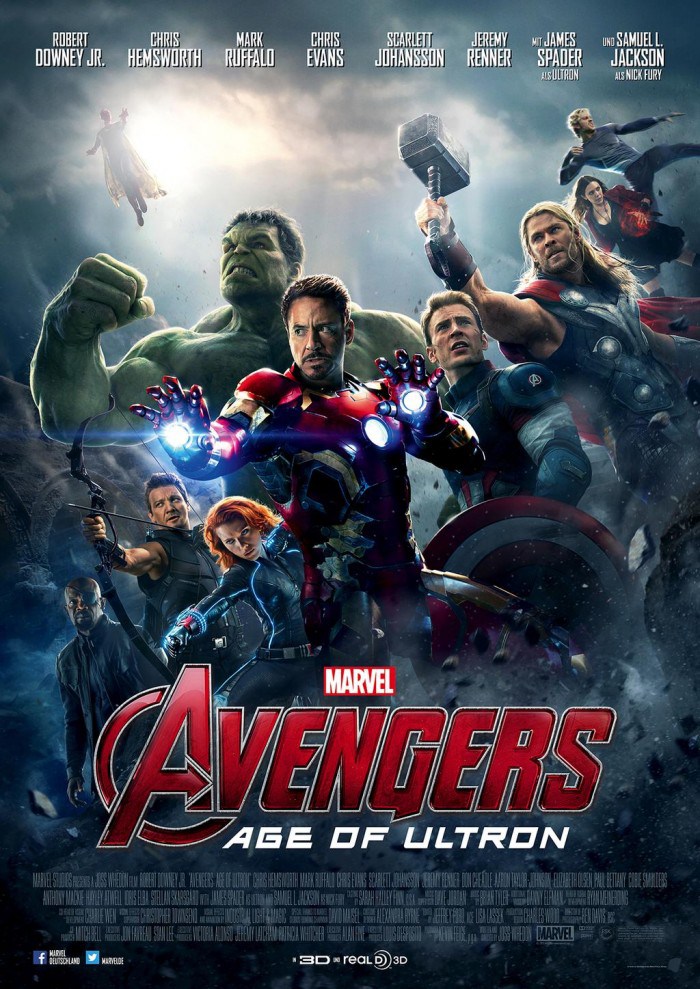