Finding the courage to finally feel confident enough to move on from the comfort of your current stage in your life can be just as harrowing as being comfortable enough to embrace the next phase you’re set to embark on. That powerful process of moving forward with your plans and goals is intriguingly and humbly showcased in the new musical comedy, ‘Pitch Perfect 2,’ the sequel to the 2012 sleeper hit, ‘Pitch Perfect.’ Not only do the main characters in the female empowerment follow-up learn to accept that it’s time for them to graduate college and move on from their a capella group, but actress Elizabeth Banks finally felt self-assured enough in her storytelling abilities to make her feature film directorial debut with the movie.

Picking up several years after the ending of the original film, ‘Pitch Perfect 2′ follows the three-time defending national a cappella champions, the Barden Bellas, as they’re performing for President Obama for his birthday at New York’s Lincoln Center. After Fat Amy’s (Rebel Wilson) spandex outfit accidently splits during the group’s routine, the Bellas are suspended by the podcasting co-presidents of competitive a cappella’s governing body, Gail (Banks) and John (John Michael Higgins). As per terms of the group’s disciplinary status, they’re no longer able to compete or hold auditions for new members. But the Bellas find a loophole, which allows them to accept a legacy member, Emily (Hailee Steinfeld). The freshman is eager to join the group, as her mom, Katherine (Katey Sagal), was a legendary member of the group when she attended Barden in the early 1980s.

The Bellas are now being led by Chloe (Brittany Snow), who serves as the group’s spokesperson and chief choreographer, and Beca (Anna Kendrick), who creates the singers’ arrangements. While Chloe, who is purposefully in her seventh year at college so that she can stay in the a cappella group, is despondent over the fact that the Bellas can no longer compete, Beca is more concerned about preparing for her future. She has accepted an internship at a local record label, which she hopes will help her goals of becoming a music producer, under the guidance of her domineering boss (Keegan-Michael Key). While Beca has kept her internship a secret from Chloe and the rest of the group, her long-term boyfriend and Treblemakers a cappella member, Jesse (Skylar Astin), encourages her to discuss her new job and feelings with her friends.

The Bellas become even more upset and isolated from each other when the European a cappella champion group, Das Sound Machine (DSM), which is led by the Kommissar (Birgitte Hjort Sorensen) and her second-in-command Pieter (Flula Borg), take over the rest of their tour. With the German group taking all of the Bellas’ glory during official and off-the-books competitions, the Barden girl group become even more determined to band back together and reclaim their former acclaim, especially if they wish to win the World Champions in Copenhagen.

The film’s scribe, Kay Cannon, who made her feature film writing debut on the series’ original entry, and has also rightfully garnered attention for penning scripts for such sitcoms as ‘New Girl’ and ‘Cristela, ‘ once again proved that a sincere and relatable comedy can successfully be focused on a group of young women. Between infusing Beca with an intense drive to achieve her musical career goals after she graduates from Barden, maturing Chloe into finally realizing there is more to life after she finishes her successful tenure with the Bellas and graduates, and making Amy undoubtedly accept that she can find lasting love with Tremlemakers’ alum Bumper (Adam DeVine), the screenwriter effortlessly proves how resilient and versatitle women can be when they’re determined to succeed.

However, in addition to showcasing the story’s main conflict of the Bellas trying to win the World Champions so that they can overturn their suspension and defeat DSM, the script features a few too many subplots, which disappointedly takes away from the audiences’ ability to truly connect with Beca, Chloe, Emily or any of the other Bellas. Even with ‘Pitch Perfect 2’s runtime clocking in at just under two hours, including such plot points as Amy’s determination to find love with Bumper and Emily’s struggle to appreciate her time with the a capella group, the detailed character development Cannon incorporated into her script for the original musical comedy didn’t translate as well into the sequel. While the majority of ‘Pitch Perfect’ entertainingly showcased Beca’s shellshock at entering the competitive world of collegiate a capella singing, its sequel disappointedly forgoed emphasizing the series’ protagonist’s evolving maturity and determination to achieve her next career goals.

Despite the follow-up’s multiple sub-plots that at times disappointedly failed to fully emphasize the Bellas’ motivations and thoughts, as a first-time feature film director, Banks crafted an overall visually engaging and emotionally alluring female empowerment musical comedy. From the glitzy outfits the Bellas wore during their competitions that emphasized their unique personalities that were crafted by costume designer Salvador Pérez Jr., to the elaborate and captivating songs they performed that were arranged by music directors and vocal producers Ed Boyer and Deke Sharon, the helmer effortlessly maintained the series’ high-octane momentum that was first showcased in the original musical comedy.

‘Pitch Perfect 2’ is a clever and endearing follow-up to the 2012 musical comedy, ‘Pitch Perfect,’ as it charmingly continues to explore the bonds and connections young women form and maintain as they prepare to finally step out into the world on their own. While maintaining the spirit of the captivating performances from the original installment, first-time feature film director Banks naturally and successfully adapted Cannon’s script to demonstrate how adaptable women can be when they’re determined to succeed in their personal and professional lives. While the sequel disappointedly isn’t as strongly structured to primarily focus on Beca’s struggles as its predecessor, the newest entry in the musical comedy franchise is still immensely relatable, engaging and motivating, especially for young women. 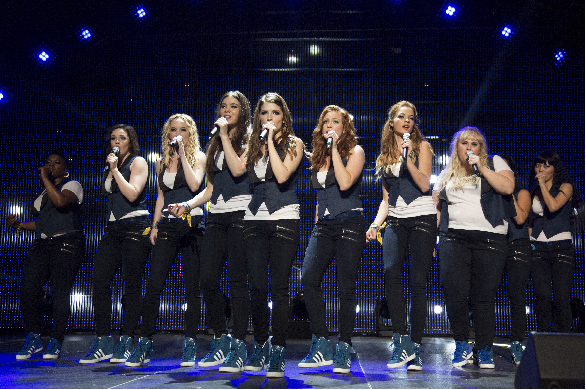