The grippingly influential decisions people make in emotional and at times rash situations can leave a powerful and lasting effect on their lifestyles. Even when they’re striving to positively change their circumstances, their choices still have the potential to significantly cause irreversible harm to their future, which can ultimately force them to finally reconsider their attitudes and beliefs. That’s certainly the case with the distressed protagonist, Hazel, who’s played by Bella Thorne, in director Jorge Michel Grau’s new thriller, ‘Big Sky.’ The drama, which is set to be released tomorrow in theaters and on VOD, follows the distraught character as she finally realizes that her behavior is holding her back from what she needs and wants to accomplish, as well as overcome her internal fears.

‘Big Sky’ follows Hazel, an emotionally troubled teen who has long been struggling to overcome her severe agoraphobia. She often stays locked in her bedroom, and isn’t emotionally ready to experience the most important events in her adolescence, including going to her prom and graduation. The only way she stays connected to the real world is through her computer, much to the dismay of her mother, Dee (Kyra Sedgwick). Dee decides that it’s time for her daughter to travel to, and check into, a medical facility in the desert to overcome her anxiety.

In her first venture outside of their house in months, Hazel is accompanied by her mother, as well as three other patients, in one of the facility’s vans. While the teen is slowly adjusting to her new environment, the group is unexpectedly targeted by two masked gunmen, Jesse (Frank Grillo) and his younger brother Pru (Aaron Tveit), who are carrying out a kidnapping. After her mother, who has long relied on pills to contend with her daughters’ illness, was shot while the van was under seize, Hazel must muster up the courage to walk to the closest town on her own, in order to find help. As the entire group’s plans go awry, they all must determine what their next course of action should be, and ponder the decisions they made that have led to their painful situation.

Thorne took the time recently to talk about playing Hazel in ‘Big Sky’ during an exclusive phone interview. Among other things, the actress discussed how she was drawn to play the character of Hazel in the thriller, as she’s a distinct protagonist in the sense that her anxieties are preventing her from overcoming her illness; how it was challenging to communicate with Grau at times on the set, as he only speaks Spanish, but she enjoyed developing her character with him; and how she embraced acting and performing stunts on the independent drama’s location in the desert of Albuquerque, New Mexico, which helped her connect with Hazel.

ShockYa (SY): You play Hazel, a teen who’s set to check into a high-end treatment facility to treat her agoraphobia, in the new thriller, ‘Big Sky.’ What was it about the character, as well as the story overall, that convinced you to take on the role?

Bella Thorne (BT): Well, I was interested in showing that Hazel’s mind is set to do something, but she can’t actually do it. She can’t get away from her fear, because she’s too scared to, which is interesting. She’s a very different type of character, because other characters’ personalities are usually the exact opposite of hers.

SY: What kind of research did you do in order to relate to, and showcase, Hazel’s mindset and motivations before you began filming?

BT: Yes, I had to do a lot of research before I got to the set, which actually made me want to play Hazel even more. But there weren’t that many opportunities to do extensive research into her illness, because doctors don’t know how to treat it. It’s the doctors’ job to find ways to treat it, but they still don’t know what causes it. So these poor people who suffer from it are stuck in their houses, and they’re never able t get over their fear.

SY: Were you able to have any rehearsal time with Kyra Sedgwick, who played Hazel’s mother, Dee, before you began filming, in order to build their relationship?

BT: We spent some time together when we weren’t filming. We went to lunch and talked about mother-daughter things. I didn’t have a lot of scenes with her, so we didn’t have to do a lot of preparation together.

SY: What was the process of filming ‘Big Sky’ on location in the desert in Albuquerque, New Mexico? Did the desert’s isolated nature influence the way you approached playing your character?

BT: I like the process of filming on location, but I do like it better when I film in L.A. But this experience was fun, and the desert didn’t really bother me. But at night, it became really cold, which was difficult, because I was walking around in jeans and a T-shirt.

SY: How did filming the thriller independently influence the way you approach playing Hazel? Did the process give you more creative freedom as you were shooting?

BT: It was really good that we didn’t have much money, because that allowed us to do whatever we wanted. It was great that we had that flexibility, which allowed us to show more about the character and what she’s really going through, instead of just concentrating on the story points.

SY: What was the process of also collaborating on the characters and story with the drama’s director, Jorge Michel Grau rehearse?

BT: The experience was a little hard. (laughs) Jorge only speaks Spanish, so it was a little difficult to take direction from him. But it was interesting to get to know him. Jorge, our producer Ricky (Tollman) and I all came together to create the character; it wasn’t just Jorge or I who developed her.

SY: Besides showing the emotional motivations to Hazel’s character, the film’s story also features some stunts. What’s the process of balancing your character’s emotions with his physicality overall?

BT: I did do a lot of stunts for the film, but I didn’t do the sequence where she falls off the cliff. I had to look as though I broke my ankle in that scene, so that stunt was too dangerous for me to perform.

SY: ‘Big Sky’ is set to be released in theaters and on VOD on Friday. Are you personally a fan of watching movies On Demand? Why do you think the platform is beneficial to independent films like this one?

BT: It definitely is helpful, because it helps get people to see the film. We didn’t really have the budget to have all of this advertising for a bigger theatrical release. So since we’re not having a wide release, On Demand is helping this ovie, like other independent films, be seen.

SY: Besides films, you have also starred on several television series throughout your career, including ‘Shake It Up!’ and ‘Big Love.’ What is it about television that you enjoy working on it so much?

BT: Well, the timing’s very different. Learning the script for a film isn’t all that different from when you’re on a TV show, but the amount of time you have to get the entire story in is different. For films, you have one-and-a-half to two hours to make your character likable. But on a TV show, you only have an hour, or sometimes even 30 minutes, to achieve that same result.

SY: How does starring on a television series compare and contrast to making films, particularly indies like ‘Big Sky?’ Do you prefer knowing your character’s complete arc in advance, like in movies, or having their storylines open-ended, like on TV?

BT: I don’t really have a preference, to be honest; I’m happy working on everything. I love watching, and starring in, television shows, where you really have the chance to grow with your character, and you can make changes as each season progresses. The fans can also help make changes to series when they discuss what they do and don’t like. But I also love watching and acting in movies, because they tend to become more iconic than TV shows-you can’t change anything about films once they’re released.

SY: You have also starred in several horror projects throughout your career, including the upcoming film reboot, ‘Amityville: The Reawakening’ and the current ‘Scream’ TV show on MTV. What is it about the genre you enjoy so much, and has does it compare and contrast to the other genres you have appeared in?

BT: I am a big fan of the horror genre, and grew up watching it. I started watching it when I was little, and I still love it. I’m very happy to be in horror films and shows.

SY: Besides ‘Big Sky,’ do you have any other projects lined up that you can discuss?

BT: I’m about to start filming a television series called ‘Famous In Love,’ which I’m also going to produce, for ABC Family. I also have the films ‘Amityville: The Reawakening,’ ‘Home Invasion’ and ‘Alvin and the Chipmunks: The Road Chip.’ 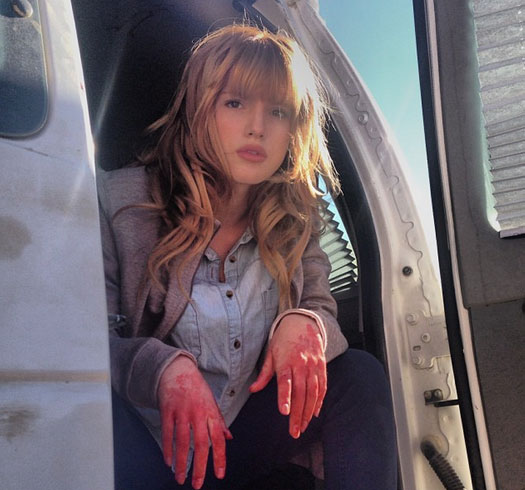