Leading a retaliation against the latest deadite invasion requires a fortified defense by the fearless humans who are determined to kill the demonically possessed undead once and for all. Ash, the guilt-ridden and at times reluctant hero of ‘The Evil Dead’ franchise, is leading the fight in his legendary trailer.

Along with his allies, Kelly and Pablo, in STARZ’s hit horror comedy series, ‘Ash vs Evil Dead,’ the title character is leaving behind his beloved Jacksonville and returning to his hometown of Elk Grove. In honor of the characters’ triumphant journey to Michigan, actor Ray Santiago, who portrays Pablo, is offering the show’s viewers a new behind-the-scenes clip. During the video, in which the performer is in character as Pablo, he takes fans on a private tour of Ash’s home.

When ‘Ash vs Evil Dead’ returns to the premium cable network for its second season on Sunday, October 2, the formidable gang of Ash, Pablo and Kelly embark on a trip to Elk Grove, where the protagonist confronts Ruby. The former enemies have to form an uneasy alliance as Elk Grove soon becomes the nucleus of evil.

The cast is led by Bruce Campbell, who reprises his role of Ash Williams from the popular ‘The Evil Dead’ film trilogy; Lucy Lawless as Ruby Knowby, who now possesses the powerful Necronomicon; Santiago as Pablo Simon Bolivar, Ash’s loyal sidekick who’s dealing with the trauma he suffered in the cabin; and Dana DeLorenzo as Kelly Maxwell, who, grief-stricken after the death of her parents, plots revenge against The Evil Dead. Lee Majors, Ted Raimi and Michelle Hurd join the series this year as Brock Williams, Ash’s father; Chet Kaminski, Ash’s childhood best friend; and Linda, Ash’s high school love.

Watch Santiago take fans of the STARZ horror comedy series on a tour of Ash’s trailer in the behind-the-scenes clip below. 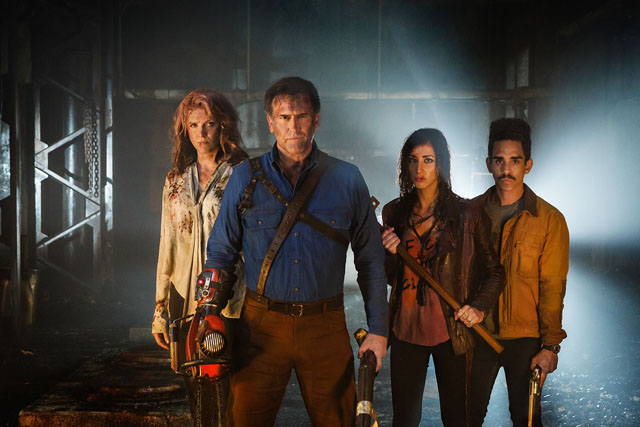