Halloween often brings terror among horror fans who fear what spirits the holiday can conjure up. As genre buffs honor the terror that arises on the most frightening day of the year, this fall they’ll be able to continue celebrating that fear into November. ‘From Dusk Till Dawn,’ the movie that brings vampires, criminals, bikers and families together like no other, is returning to theaters for two days, on Sunday, November 6, and Wednesday, November 9.

In celebration of the cherished action film’s 20th anniversary, Shockya is offering three lucky winners a pair of tickets (six tickets total) to any participating theater. To enter, follow us @Shockya, and tweet us the phrase: “.@Shockya is giving away three pair of tickets for ‘From Dusk Till Dawn’s Fathom Evens theatrical release! Follow and RT to enter!” Or, you can email us at ShockyaGiveaway@aol.com. Let us know that you’re entering to win the ‘From Dusk Till Dawn’ ticket contest in the email;s subject line and message. You have until Halloween day (next Monday, October 31), to enter, and you can enter the contest once daily. After October 31, we’ll pick the winners at random and notify them through email. Good luck!

The Gecko brothers and the Fuller family are going on a wild ride south of the border to the home of Santanico Pandemonium and the vampires that brought together Quentin Tarantino and Robert Rodriguez for a 20-year partnership. That collaboration is being honored by Fathom Events and Miramax, which served as one of the fantasy film’s production companies.

Tickets are available now via Fathom Events’ website, or at participating theater box offices. The event commences with a brand-new, exclusive Q&A with Rodriguez, who directed, and Tarantino, who wrote and starred in, the drama. The conversation is moderated by renowned film critic and host of ‘The Treatment,’ Elvis Mitchell.

Since ‘From Dusk Till Dawn’s original theatrical release, it has gained a rabid cult following and spawned two film sequels. It has also inspired an acclaimed television series that airs on Rodriguez’s El Rey Network, which is titled ‘Dusk Till Dawn: The Series,’ and is currently airing its third season.

“‘From Dusk Till Dawn’ is unpredictable, creative and breathtakingly original, a movie that almost defies description,” Fathom Events Vice President of Studio Relations Tom Lucas said. “Fathom is excited to help bring this collaboration of Robert Rodriguez and Quentin Tarantino, two of the unique voices in modern American cinema, back to the big screen for four special showings to commemorate its 20th anniversary.”

The crime film stars George Clooney and Tarantino as the Gecko brothers, two dangerous outlaws on a wild crime spree. After kidnapping a father, Jacob Fuller (Harvey Keitel) and his two kids, Kate and Scott (Juliette Lewis and Ernest Liu), the Geckos head south to a seedy Mexican bar to hide out in safety. But when they face the bar’s truly notorious
clientele, they’re forced to team up with their hostages in order to make it out alive.

Check out images and the poster from ‘From Dusk Till Dawn’ below. 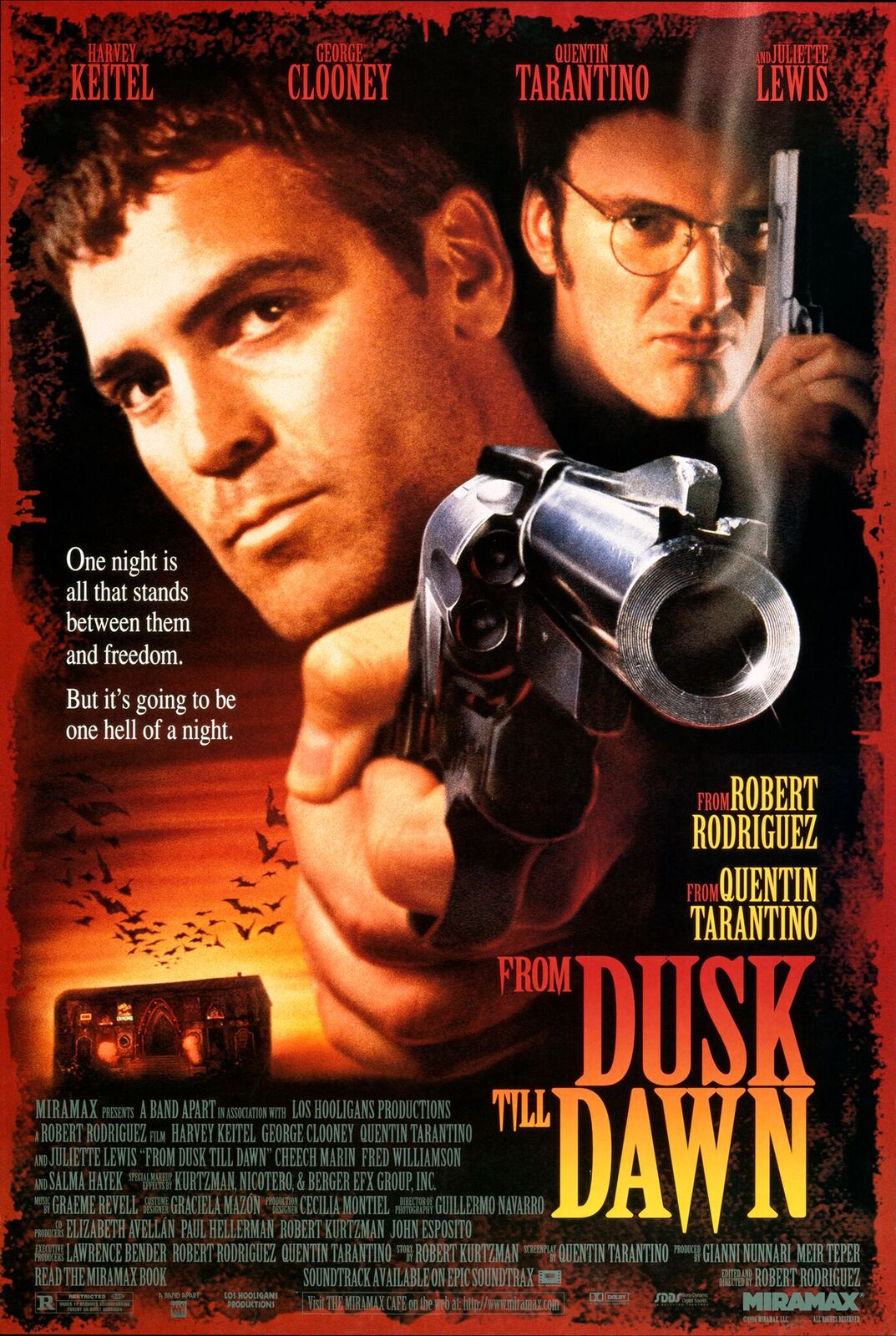