A film auteur often pours elements of themselves into their most candid, relatable and emotionally vulnerable work. That’s certainly the case for two-time Academy Award-winning Spanish filmmaker, Pedro Almodóvar, and his latest drama, ‘Pain and Glory,’ which he wrote and directed. Some elements of the semi-autobiographical movie are based on his own personal, real-life experiences, which help drive the emotions and actions of its filmmaker protagonist, Salvador Mallo.

Antonio Banderas portrays the troubled main character in ‘Pain and Glory,’ which marks the eighth collaboration between the scribe-helmer and actor. (The pair first worked together on the 1982 Spanish comedy, ‘Labyrinth of Passion.’) For their latest professional alliance, they have created a troubled hero who lives in near-constant physical and emotional pain as he reminisces about his life and career. His present-day suffering is driven in part by the heartbreak of some of his past relationships and experiences.

The drama is set to have its public screening tomorrow night at the 57th New York Film Festival (NYFF), which is being presented by Film at Lincoln Center. Sony Pictures Classics is set to release ‘Pain and Glory’ next Friday, October 4 in select theaters in the U.S. The American distribution comes after the movie made its international debut at the 2019 Cannes Film Festival, where Banderas won the award for Best Actor. The drama was then selected to play as a Special Presentation at the Toronto International Film Festival earlier this month.

‘Pain and Glory’ follows the psychological journey of Salvador, a self-absorbed movie director, which is told between recollections of his earlier self as a young boy (played by Asier Flores), and his present day. As he reflects on his past experiences and current pain, Salvador struggles to regain his passion and ability to work as a filmmaker.

Along the way, he’s forced into a reckoning with his earlier life through a series of fretful reunions. He’s invited to appear at a film festival retrospective with the drug-addicted actor, Alberto (Asier Etxeandia), whom he feels precipitated his fall from cinematic grace decades ago with an underwhelming performance that was fueled by heroin addiction. The wounds between them are still deep and unhealed, and the duo hasn’t spoken since their movie was released. Their uncomfortable reunion leads to Salvador’s first experience with heroin, which momentarily helps heal his physical and emotional pain.

While contending with how he can revive his directorial career and overcome his physical and emotional anguish, Salvador also remembers his early life in Spain, where he was forced to live in a cave-like compound with his mother, Jacinta (Penelope Cruz). It was also where he had his first confusing encounters with sexual desire for a handsome young illiterate laborer, whom the bright boy taught to read and write. His confusion about his sexual attractions is again raised when he has another strained reunion, this time with his former lover, Federico Delgado (Leonardo Sparaglia). Their reconciliation helps Salvador realize how important it is for him to finally put his life back on track, and seriously pursue what he truly wants in life.

Banderas and Almodóvar generously took the time on Thursday to participate in a press conference at Lincoln Center’s Walter Reade Theater during NYFF. During the conference, the actor and writer-director talked about starring in and helming ‘Pain and Glory,’ which served as one of the festival’s Main Slate selections, including the film’s creative process, as well as mixing truth and fiction in the drama’s narrative.

During the press conference, Almodóvar delved into how closely Banderas’ character of Salvador mirrors his real life. “I think my entire biography has been told in the 21 films I’ve done before this one,” he explained. “I’m reflected in a really oblique way because I’m standing behind characters that are women or not film directors. This is the first time I took my reflection and look at myself. Every search that I made for the script, I made inside me. In any case, I am reflected in a more intimate way in this movie more than any other one.

“For me, it’s not important that the spectator thinks that this is about me or that this is my portrait or not. In the process of writing, at the beginning, I was thinking about writing about myself,” the scribe added. “I was always present. There is a moment when you are in 20 pages of the script, and everything you are writing is mixed with fiction. There is a moment beyond that when you are three-quarters of the way through the script, and that fiction is what rules the narration, and reality disappears. In that moment, I need to feel believable in a cinematic way, even if it doesn’t represent reality.”

‘Pain and Glory’ isn’t a total biopic of Almodóvar’s life, however, as many of the moments in the film happened to other people in his life. “When I say the movie is very familiar to me, it’s also because I made (it) with the memories of everyone around me,” he revealed. “For the movie, I sometimes stole memories from my assistants, brother or some friends, or from the period I was living. Everything is familiar to me, but that doesn’t mean I lived in the movie.

“Actually, there are many things that I never experienced. When I was a kid, I never lived in a cave, but I know the feeling of that guy because we all move up and migrate. So I know what it means to leave your hometown and move to another place in a precarious way,” the writer added.

“I also never fell in love with a painter or builder as a kid. But at that time, I knew about my sexuality,” Almodóvar disclosed. (The filmmaker has publicly shared that he has been with his partner, actor-photographer Fernando Iglesias, since 2002.) “I never had a heroin experience, but during the ’80s, I was surrounded by many close friends who were into that, so I knew I have enough information about that,” he also shared.

While many scenes in ‘Pain and Glory’ are altered from the filmmaker’s real-life experiences, in order to better explore Salvador’s emotions, some scenarios are directly taken from the helmer’s own experiences. “Some other things are completely part of my life. For example, the scene when we’re preparing the mother for death and the experience of ending an affair when passion was alive and well were (real). But I haven’t had the experience of that love returning 32 years later, which is the nice thing about fiction; you can write it and then experience it through the actors.”

Banderas was even surprised by some of the scenes that Almodóvar included in the script, even though the two have known each other for almost four decades. “We have been friends for a 40 years now and we’ve done eight movies together, but our friendship has certain boundaries,” the actor said. “Pedro is a very private person, and I’ve never tried to trespass those boundaries; I’ve always been respectful of his private life.

“So it was a surprise for me when I read the script and there were some aspects of his personality that I didn’t know. I didn’t know that he wanted to close certain circles in his life that were open, as well as certain wounds with his mother, actors, cinema, an ex-boyfriend and even life iteself. It became clear to me that there are certain areas (in the script that) are real, and there are certain areas that are fictional,” the actor also admitted.

The filmmaker also included flashbacks to Salvador’s childhood and time as a young adult the movie. He felt moving between Salvador’s past and present was a seamless process. “The structure is always a result of the script, and it wasn’t always there from the very first draft,” he shared. “It’s not until I repeat the various drafts, and I decide which stories to tell and how I want to tell them, that the structure comes about.

In the case of ‘Pain and Glory,’ the idea for its structure “came from the idea of flowing water. I started writing this sequence where (Salvador’s) underwater.” Due to the forces of “gravity, he’s in the best situation of the day, as he doesn’t have any muscle tension. This was something I would do in the summertime before I started writing. I asked someone to take a picture of me in that situation…Immediately, after having that pleasure, I thought this is a good shot to start a movie on,” Almodóvar added.

From that opening scene, the’s scribe’s writing began to reflect his past. “I started writing why (Salvador) has a big scar on his back,” the writer noted. “The water drives me to another water, which is the river where my mother and the neighbors are washing in the river. When I discovered that I could alternate between my childhood and my adult life, it gave me the key that allowed me to continue writing.

“I didn’t want to make a movie about someone who was complaining about the pain he is suffering. Nor did I want to write about Antonio’s character’s solitude and isolation,” Almodóvar also divulged. “So when that very natural connection to my childhood came up, I realized that that would be the most natural way to tell this story.

“It’s really important to me that these memories have actually come back to save” Salvador, the director said. “His addiction isn’t to heroin; it’s to making films. The biggest pain he’s feeling is actually a sensation that he has that he’s never going to be able to shoot (movies) again.”

Watch the full ‘Pain and Glory’ NYFF press conference in the above video, and the official trailer for the drama below. 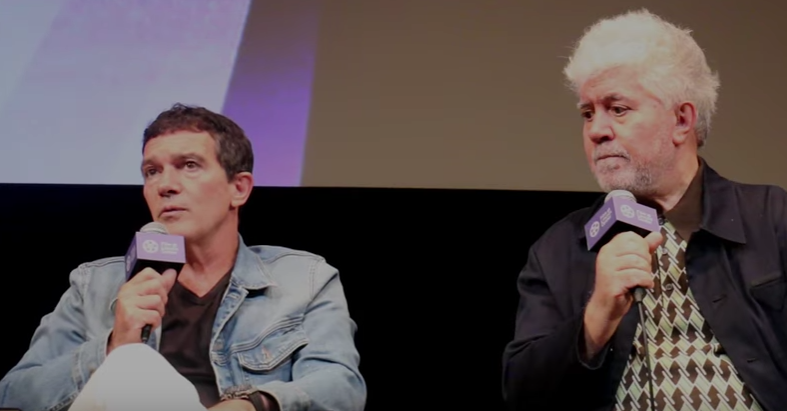