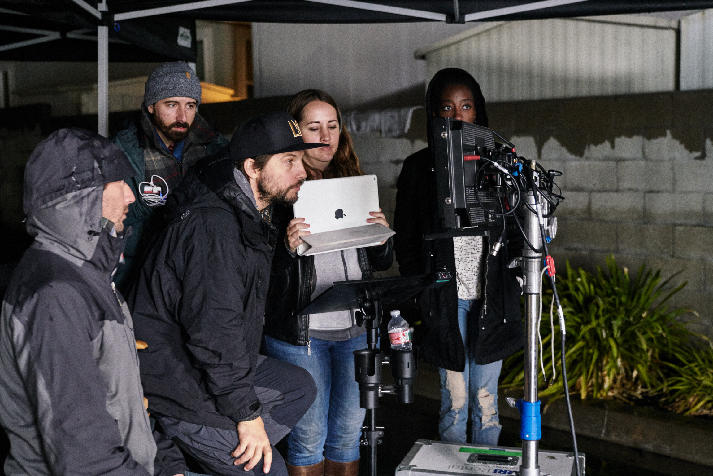 (Center): Writer-director Logan Marshall-Green on the set of ‘Adopt A Highway,’ an RLJE Films release. Photo courtesy of RLJE Films.

Finding their place in a world they aren’t familiar with, or even recognize, can be an intimidating process for anyone who embarks on a new journey in life. That’s certainly the case for both the anti-hero and the filmmaker behind the new drama, ‘Adopt a Highway.’

The movie, which is opening in theaters and on VOD and Digital HD this weekend, courtesy of RLJE Films, marks the feature film directorial and writing debuts of actor Logan Marshall-Green. The performer, who’s made a name for himself on screen in such films as ‘Spider-Man: Homecoming,’ ‘Upgrade‘ and ‘The Invitation,’ powerfully and emotionally chronicles the struggle of ‘Adopt a Highway’s main character as he reintegrates back into society after serving a lengthy prison sentence.

‘Adopt a Highway‘ follows Russ Millings (Ethan Hawke) has just been released from prison after serving 21 years for a third strike conviction for possessing an ounce of marijuana. As he tries to adapt to a world he doesn’t recognize, including trying to learn how to use the internet, he finds an abandoned baby, Ella (played by twin girls, Everly and Savannah Sucher), in a dumpster behind the fast food restaurant where he works as a dishwasher. Unsure of what to do, and caught between impulses of kindness and panic, Russ soon realizes this could be his chance at redemption.

Marshall-Green generously took the time recently to talk about writing and directing ‘Adopt a Highway’ during an exclusive phone interview. Among other things, the filmmaker discussed how he’s continuously drawn to showing the misunderstanding of the characters he creates, and how Hawke helped him bring Russell’s flaws to life. The scribe-helmer also shared his appreciation over being able to make his feature film writing and directorial debut with the drama, and how he learned vital filmmaking lessons from his cast and fellow crew members on the set.

The conversation with Marshall-Green explaining what the process of writing the script for ‘Adopt a Highway’ was like, and how his experiences as a father influenced the way he approached working on the movie’s screenplay. “My motivation for writing this script was so that I could go make some other scripts that demanded a little more financing, if I’m being honest,” the scribe revealed.

“But, upon that, I thought about what was financially realistic, and how I could get a movie made. Producers, and everyone else who gave me advice, said, ‘Just make sure that when you write the script, it’s sexy, and has drugs, sex, violence and explosions. Most importantly, don’t write anything original,” Marshall-Green also admitted. “They were serious about that. All I ever heard was, ‘Get that sexy idea.’

“So I went and did the opposite, and it was a great exercise for me, because I was tapping into elements in me that I’m fearful of, including human condition, honesty and my own sense of self-worth and purpose,” the scribe also divulged. “So as a new writer, I had to start with truth.

“So I started with my own truth. I realized that I was a new father, almost overnight and I was completely lost,” Marshall-Green shared, referencing his experience of becoming a step-father when he got married in 2012. He also has a son, who was born 2014. “I was in love with this daughter of mine, but I didn’t know what to do. So I put on a good face, and tried to make it look like I knew what I was doing, but I didn’t. I had to learn on the fly, as there wasn’t a handbook on Google, and that interested me.

“The male plight of fatherhood, and all the faking we do to make it look like we know what we’re doing, interested me. All you can do in the end is love your children. That was the genesis of Russell Millings,” the writer added.

Marshall-Green also disclosed that “I don’t write unless I’m having fun. So it does take a bit longer that way, once I do start writing. But the process does flow, because I do a few years of research and development on the story before I start writing. Then, when I’m ready, I write a script in about a month. I’ve written four scripts now, and have taken about a month each time.”

As a filmmaker, Marshall-Green ‘s drawn to showing the flaws and misunderstanding of characters. While Russell is an imperfect ex-convict when he’s released from prison, he tries to become a better person while he cares for Ella, which offers him insights into how he can improve himself. “Misunderstood is the perfect word to describe Russell. As an actor, I’m drawn to flawed individuals. One of my biggest pet peeves is when people come up to me and say, ‘You’re the bad guy.’ So I always correct them and say, ‘No, I was the misunderstood guy. We don’t start off as bad guys.'”

The scribe also disclosed that “The thing that I was interested in sharing with this character was his ability to be dynamic. One of the things we went after was to create a central male figure without any toxicities. There weren’t any judgments in Russell; he’s content, and not unhappy.” Marshall-Green continued, “He has such a purity to him that it almost makes you want to cry.

“So it was really easy when Ethan came on board, and so readily had a grasp on who this (character) was, and already elevating him beyond what was written. So the most important thing was getting out of Ethan’s way, and letting him make non-judgmental, non-defensive choices. For the most part, he knew exactly what to do with Russell,” the filmmaker also confessed.

Further speaking about working with Hawke, Marshall-Green added that “One of the most impressive things about Ethan to me is his ability to lead, and ten easily take off his director and writer’s caps, which he had on only weeks before photography” on ‘Adopt a Highway.’ The Academy Award-nominated Hawke also “has the ability to walk on set and leave his personal life aside, and ask, ‘How can I achieve your vision?'”

Marshall-Green then pointed out that “Ethan started his career playing these poetic, frail characters. But Ethan’s a leader…and has real decision-making abilities, and creative ideas and opinions” about filmmaking. The helmer of ‘Adopt a Highway’ also noted that Hawke’s “a father of four, so he knows exactly what to do when it comes to babies!,” he said with a laugh. “So that’s what makes his performance all the more impressive to me.”

The experience of being able to make his feature film directorial debut with ‘Adopt a Highway,’ in addition to writing the screenplay, was one that Marshall-Green also cherished. But he admitted that he “got schooled everyday on what I didn’t know…There’s no doubt about it-there were days that I failed,” he admitted with a laugh.

“There were those days I played catch up, but there were also days where I was prepared. Luckily, I had the best crew, including the best DP (Director of Photography, Pepe Avila del Pino) and the best producers and leaders in Couper (Samuelson) and Jason (Blum, who previously worked with the writer-director when he produced ‘Upgrade’ and this year’s horror movie, ‘Prey’). Of course, I also had the number one in the business with Ethan. So my safety net was strong, and I was afforded mistakes, through the professionals I was so fortunate to be around,” Marshall-Green also gushed.