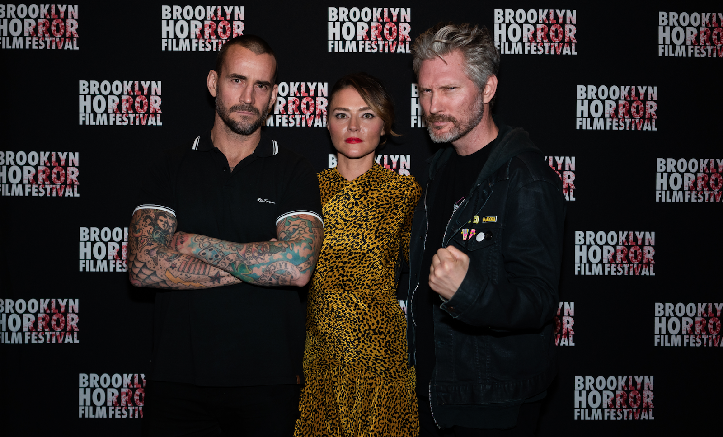 Conquering both a sordid history and inner demons can be a terrifying and mysterious experience. But that process can become even more frightening and perplexing when the evil isn’t just plaguing a specific person, and is instead targeting an entire house and all of its inhabitants. That’s certainly the case for the central location, as well as all of the characters, in writer-director-producer Travis Stevens’ new horror movie, ‘Girl on the Third Floor,’ which is now playing in select theaters and on Digital platforms, courtesy of Dark Sky Films.

‘Girl on the Third Floor’ follows Don Koch (WWE legend Phil “CM Punk” Brooks), a married man who’s remodeling his new home, in hopes of starting over while trying to overcome his legal troubles and fidelity issues. But once inside the fixer-upper, Don is helpless against the house’s bursting pipes, rotting walls and unidentifiable slime. The structure’s run-down condition is not what he expected when he convinced his wife, Liz (Trieste Kelly Dunn), that he could renovate their new Victorian home himself. In over his head, under duress and tempted by his old weaknesses, Don soon discovers that the house has its own dark, sordid history, and won’t be so easy to remodel after all.

Stevens and Brooks generously took the time to talk about writing, directing, producing and starring in ‘Girl on the Third Floor‘ during individual exclusive phone interviews. The conversations were held the week that the drama had its New York Premiere on Wednesday, October 23, at the Nitehawk Cinema Prospect Park during the Brooklyn Horror Film Festival, where it was honored with the Best Gooey Effects award. The filmmaking duo were also in attendance at the festival, to help further support the movie’s official release.

Stevens began his conversation by explaining why he was drawn to pen the script for the drama. “The house where we shot the movie sits right outside of Chicago, and it’s rumored to be haunted. It sits across the street from a church, which was supposedly a bordello at the turn of the century. So those were all facts before I started writing the script,” the writer disclosed.

“From my perspective, when you’re in a house with this kind of history, the job is to create a new story, while also honoring the actual history of the house. It was kind of hard to come up with an interesting story that looks at the dynamics at play that led to the original suffering,” Stevens also revealed.

The conversation with Brooks began with him explaining what it was about the character of Don, as well as the overall scrennpaly, that convinced him to take on the role in ‘Girl on the Third Floor.’ “What interested me in the character of Don was his duality. He was less than great to the people in his life, but was somehow charming enough to get away with it,” the actor explained. While he also thought his character could be obnoxious, “he’s also sympathetic.”

Brooks, who was born, and still lives, in Chicago, “became attached to this project because (the filmmakers) were looking for a mostly Chicago-based crew. I guess my name always comes up when (filmmakers) look for a leading guy in Chicago, which is flattering to me.

“MPI (Media) and Dark Sky (Films) have worked with Bobcat Goldthwait, who directed me in a couple of episodes of (the television comedy series,) ‘Maron,'” the performer shared. “So they were looking to get a hold of me through him. I also have a friend of a friend who works as the MPI offices…So all roads led to ‘Girl on the Third Floor!'”

Brooks also disclosed that he decided to star in the movie before he even read the script. The filmmakers gave him all the information about the project before he signed on, including that “it’s going to be filmed here in Chicago, and Travis Stevens is writing and directing it. So I was immediately like, how can I say no to this? He produced all these great films that I’ve seen and loved, including ‘Starry Eyes’ and ‘We Are Still Here,'” the actor also noted.

Stevens also spoke about how in addition to scribing the screenplay, he also made his feature film directorial debut with the drama. “I was incredibly lucky to have the opportunity to write and direct the film. Storytelling is something that’s been really important in my life, and I think it’s important to have in everyone’s lives,” he revealed. “So to be able to create something that has a message that’s important to me, as well as great horror moments, was a dream job.”

“So to be able to work with such talented people got me super excited. I then read the script, and jumped at the opportunity, and it was a really easy decision to make,” Brooks added.

With the majority of the story being set in the Kochs’ new home and its surprising property, Stevens shared that the process “sounded great on paper! We’re going to film a movie in an actual haunted house! But then when you’re there, filming at 4 in the morning, and you’re filming in the basement, you think, this is intense! That’s what it was like for a certain period of the movie. Then by a certain point, I felt like the house accepted what we were doing, which made things a little bit easier.”

Brooks also commented on shooting ‘Girl on the Third Floor’ on location. He called the process of primarily shooting in the real Chicago-based house “great and comfortable. (We filmed in) the one house, so all the interiors and exteriors were all in the same location.

“I think I got spoiled, because going forward, it’s not always going to be like that. So (this movie) was a dream come true. I got to wake up in my own bead, with my wife and dog, every day, and then go to work, and be in one central location,” Brooks also gushed. “Our home base was across the street, which made everything, even on the most difficult days, a lot easier.”

Another aspect of making ‘Girl on the Third Floor’ that the director and actor both enjoyed was working with the entire cast on the set. Stevens shared that “On a smaller budget, indie film, you don’t have quite the amount of rehearsal time that you’d like. We did do a few read-throughs of the script.

“In my experience, if you cast a film right, you can tweak the script all the way through until the day you’re shooting. On this film, we were lucky enough to get the right actors for each role, and they brought their characters to life in ways that were better than what was on the script,” the helmer further explained.

While Brooks cherished the process of working with his co-stars, particularly Dunn, he didn’t actually meet until her first day on set, he admitted with a laugh. On “Her first day on set with me, we shot all of our intense scenes together. We did a couple table reads in Chicago, but she couldn’t make them.”

Brooks added that he was “familiar with Travis, who played Milo, and Sarah, who played Sarah. But we didn’t rehearse too much, except on the day of our scenes. We’d also bounce ideas off of each other.” He further noted that “With everyone being from Chicago, we were able to have multiple table reads, so we were all familiar with each other.”

“Well, the scenes where I’m alone, and the scenes where it’s just me and the dog, were the most nerve-racking for me,” he admitted. “When you have scenes with your co-stars, you have someone to play with. In between takes, you’re laughing and joking, and you build your relationships, and I think that helps make scenes better,” the performer further explained.

“But when it was just me and the dog, I had nothing to do. We’d shoot something, Travis would yell cut, and I would look at him and ask, ‘Do you want to do that again?’ He’d be like, ‘Nope, we got it, we’re moving on.’ So it would just be me and the dog, who I developed a tremendous bond with,” Brooks added with a laugh in his voice. “So it was a bit nerve-racking, and stressful, to work with just the dog, and not get feedback right away.”

In addition to the emotional arc, Don also experiences physical obstacles while he’s working on the house. The actor then disclosed what the process of creating the physicality and stuntwork for the movie was like.

“I wouldn’t say that I had to a lot of stunts, but there was a lot of physical stuff. There was a lot of me destroying walls. In some of the gnarlier scenes, when we did some of the practical effects, wasn’t easy. I was rolling around on the floor, take after take, which took a toll,” Brooks admitted. “But I’m so used to being physical (for the WWE), that it’s old habit for me.”

Stevens also mentioned that Don experiences physical obstacles while he’s working on the house. “One of the benefits of working with someone who’s used to using their body is that they understand it as an instrument. Phil knows how to strike a pose,” the helmer shared. “There were a lot of scenes where he looks iconic in.”

Stevens also discussed how in addition to writing and helming ‘Girl on the Third Floor,’ he also served as one of its producers. He mentioned why he decide to also produce the drama. “Your job as a producer is to create a bubble around the person who’s directing the project, so that that person can do their job free of any stress or negative influences. It was interesting being on the other side of things, as a director, and realizing how important the job of a producer is, so I have a much greater appreciation of producers now.”

At the time of the interview, Brooks had seen ‘Girl on the Third Floor’ three times; “I saw it at SXSW, the Chicago International Film Festival, and in L.A. at Beyond Fest. It’s such a treat to be able to sit with an audience, and watch a film you’re in.”

Seeing people react to his art in real time isn’t always something that filmmakers get to do. So being able to bring ‘Girl on the Third Floor’ on the film festival circuit was something that Stevens cherished. “We were all sitting in a dark room together, and experiencing the same thing at the same time. So it’s been exciting getting to talk to different people, and seeing their different reactions. Now, with its official release, I’m getting to excited to wide the wider audience, and what everyone thinks!”