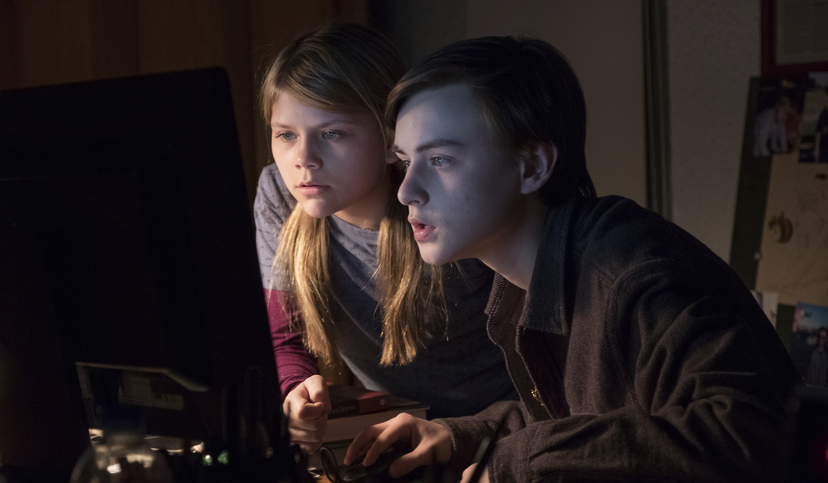 Creating an emotionally realistic and relatable horror story that powerfully chronicles the pain and struggles that are motivating both the protagonists, and seeming antagonist, can be a challenging feat for any filmmaker. But acclaimed genre writer-directors, Severin Fiala and Veronika Franz, the filmmakers behind the acclaimed 2014 Austrian horror movie, ‘Goodnight Mommy,’ have effortlessly done so yet again with their latest genre entry, ‘The Lodge.’

The well-received follow-up drama to their debut feature is driven in part by stand-out performances by its child actors, Jaeden Lieberher and Lia McHugh. Their characters, who are brother and sister, are contending with the strain of their parents’ pending divorce, and their father moving on with a new girlfriend.

The story in ‘The Lodge’ begins with an unexpected conflict between the adults, before then pulling the young siblings into a false sense of security. But then more sudden twists in the family’s dynamic continue to unfold, which will surely leave audiences just as surprised as the adolescents.

‘The Lodge’ is set to be distributed on home release this Tuesday, May 5 on Blu-ray, DVD and digital platforms (including FandangoNOW, Google Play, iTunes, Microsoft, Prime Video, Verizon Fios, Vudu and Xfinity and DirecTV Cinema.) The home release comes after the drama was unveiled in select theaters on February 7 by Neon, and had its world premiere at the 2019 Sundance Film Festival.

‘The Lodge’ follows a family who retreat to their remote winter cabin over the holidays. When the father, Richard (Richard Armitage) is forced to abruptly depart for work, he leaves his children, Aidan (Jaeden Lieberher, ‘It,’ ‘It Chapter Two’) and Mia (Lia McHugh), in the care of his new girlfriend, Grace (Riley Keough). Isolated and alone, a blizzard traps them inside the lodge as terrifying events summon specters from Grace’s dark past.

Lieberher and McHugh generously took the time to talk about staring ‘The Lodge’ during an exclusive interview. Among other things, the performers discussed how they were interested in playing the siblings in the thriler because they could relate to their characters’ relationships with each other and their parents, and also appreciated how Fiala and Franz crafted the family’s arc throughout the story. They also expressed how they were easily able to build the chemistry and bond with not only each other, but also the rest of the cast, and showcase the struggles the siblings had with the adults in their lives, especially Grace.

ShockYa (SY): You both star in the horror thriller, ‘The Lodge.’ How did you both become involved in the film?

Lia McHugh (LM): As soon as I got the script, I immediately fell in love with the storyline and characters, and how well everything was written. What really drew me to Mia was that I could really relate to her, particularly in the fact that I also have a really strong relationship with my mom, like my character did. I also loved the directors, Severin Fiala and Veronika Franz, and their movie, ‘Goodnight Mommy,’ including the characters, and how well it was made.

SY: Speaking of how Severin Fiala and Veronika Franz co-helmed ‘The Lodge,’ what was your experience like working with them both?

Jaeden Lieberher (JL): They are so funny together. This is the first time I ever worked with two co-directors, and it was really interesting to see them work as one unit; they were always on the same page, and had the same ideas. That’s what I was interested in seeing on set. They were so smart, and always focused on the big picture.

They gave us actors so much freedom. They didn’t want the movie to come out exactly how they imagined it, because they wanted to create something new with the people they were working with, which was very special.

SY: Aidan and Mia are brother and sister. What was the experience like of working together on the drama, and building your on-screen relationship?

LM: Well, Severin and Veronika gave us all the visuals we needed to really bond together. We went ice skating and rock climbing, and played tennis. We stayed in the same hotel and didn’t have anyone else to hang out with, so it was really easy to get to know each other! We clicked from the beginning, and had a great time on set.

JL: It was so much fun filming. It was so easy working with Lia, because she’s so talented. Whenever you’re working with someone who’s so good, it definitely makes your job a lot easier. The chemistry and bond between us was important for the movie, so that the story feels authentic. We didn’t really have to act when it came to bringing that bond to the movie, which is very rare. On set, we somehow had fun making this super dark and creepy movie. (McHugh laughed.)

SY: Aidan and Mia are having trouble re-connecting with their father, Richard, and rely on their sibling relationship to overcome their pain. Was it important to you to understand, and relate to, their family’s struggles?

SY: The siblings are distrustful of Grace, who’s played by Riley Keough, since they’re close with their mother. What was it like acting suspicous of Grace, and building the tension with Riley, especially when Grace’s alone with Aidan and Mia in the lodge?

JL: Before we started shooting, Lia and I were able to bond. But we also stayed separate from Riley. We didn’t really want to get comforatble with her, because the tension in the movie is very palpable. So we wanted that emotion to feel as authentic as possible, even though it wasn’t real when we weren’t filming. We were also able to talk to Richard a little bit, and get to know him. Riley and Richard are both incredible, and brought so much emotion and reality to the film.

SY: With ‘The Lodge’ primarily taking place in the title house, what was the experience of filming on location?

LM: It was definitely really cold and icy in real life, which made our jobs easier for us as actors; we didn’t have to act as though we were cold, because we really were! It was really beautiful with the ice and the lodge, but the location was also really creepy. But it was also fun working in that type of environment, because I’ve never filmed in a place that cold before. Overall, we had a blast; it was a great time!

SY: What was the exprience of creating your physicalities for your roles, such as the scene in which Aidan and Mia are ice-skating with their father and Grace, like you mentioned earlier, and showing how cold the inside of the lodge increasingly becomes throughout the story?