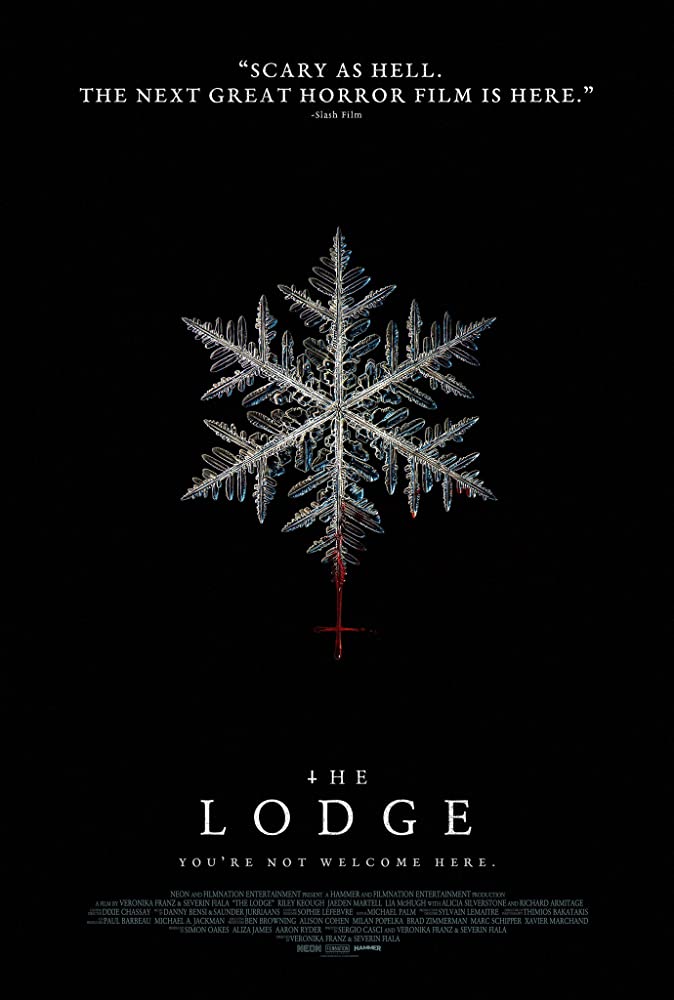 The poster for co-writers-directors Severin Fiala and Veronika Franz’s horror-thriller, ‘The Lodge.’

It’s not often when a genre film can surprisingly and frighteningly grab hold of its audience right in the beginning of the story, and ultimately refuse to let go of that grip until the last frame. But this winter’s well-received horror movie, ‘The Lodge,’ has effortlessly done just that. The plot begins with an unexpected conflict, before pulling viewers into a false sense of security. But then more sudden twists continue to unfold, leaving audiences continually surprised, in ways that will surely resonate with them.

Sergio Casci penned ‘The Lodge’s initial script, which production company Hammer Films subsequently acquired and decided to send to ‘Goodnight Mommy’ filmmakers, Severin Fiala and Veronika Franz. After the duo read the screenplay, they liked the script’s structure and story, and decided to get involved in the process of writing it further. After completing their development process, the acclaimed genre filmmakers signed on to also direct the thriller.

‘The Lodge’ is set to be distributed on home release this Tuesday, May 5 on Blu-ray, DVD and digital platforms (including FandangoNOW, Google Play, iTunes, Microsoft, Prime Video, Verizon Fios, Vudu and Xfinity and DirecTV Cinema.) The home release comes after the drama was unveiled in select theaters on February 7 by Neon, and had its world premiere at the 2019 Sundance Film Festival.

‘The Lodge’ follows a family who retreat to their remote winter cabin over the holidays. When the father, Richard (Richard Armitage) is forced to abruptly depart for work, he leaves his children, Aidan (Jaeden Lieberher) and Mia (Lia McHugh), in the care of his new girlfriend, Grace (Riley Keough). Isolated and alone, a blizzard traps them inside the lodge as terrifying events summon specters from Grace’s dark past.

Fiala and Franz generously took the time to talk about co-writing and directing ‘The Lodge’ during an exclusive interview. Among other things, the filmmakers discussed that they approached helming their first English-language feature in the same way as their first collaboration, the acclaimed 2014 horror-thriller, ‘Goodnight Mommy,’ including shooting chronologically and allowing real-life conditions to guide the filming process. They also mentioned that when it comes to casting, they listened to their instincts to determine which performers they should bring on for each role.

ShockYa (SY): You contributed to the script for the new drama, ‘The Lodge,’ which was written by Sergio Casc. What was your inspiration in co-penning the screenplay for the film?

Severin Fiala (SF): After ‘Goodnight Mommy,’ which was an unexpected success, our agents kept calling us. (Fiala laughs.) We couldn’t escape, even though we wanted to make another film. We were sent multiple scripts, many of which featured twin boys, like in ‘Goodnight Mommy.’ They felt we were genuineness in twin movies, but we weren’t interested in that.

The first script we were actually interested in was for ‘The Lodge,’ which didn’t have a name at the time; it was just called, ‘Untitled Hammer Thriller.’ That made us instantly fall in love with it, because we’re huge fans of the classic ’50s and ’60s Hammer horror movies.

So we read it, and hoped that we would like it, and we did. It was then an unexpectedly long process for us to make this pre-exisiting story our own, in our style of filmmaking. It wasn’t written specifically for our style of directing, so we worked on the script to make it our own.

SY: In addition to scribing the script, you also directed the movie, like you just mentioned. What was your helming approach for the horror thriller? How did writing the screenplay influence your directing style on the set?

SF: We tried to focus on the things that worked well on our first film. On that film, we managed to shoot in sequence; use an improvisational matter; and shoot on real locations that we could use on the inside and outside, in order to be more flexible.

So we wanted to bring all of that to our first English-language film, because we felt those aspects really helped the actors in the story. If you can shoot chronologically and be flexible, and if you can also allow real-life weather conditions and situations to enter the movie, that can really help. So that was what we tried to achieve.

At times, that way of shooting didn’t make sense to the producers, because they felt it would save money if we built the lodge in a studio. It would also make the environment on set much more controllable that way. But we felt it would be better to have things that we can’t control, and we love what we ended up with for the film. While film schools say not to work with kids and animals, that’s exactly what we wanted, because they brought a spontaneous quality to this movie.

SY: Speaking of filming the horror thriller on location, with ‘The Lodge’ primarily taking place in the title house, what was the process of determining where you would shoot, and how the lodge would look?

SF: For us, locations are always super important, because we view them as characters. They really shape what the movie feels like. I think if ‘The Lodge’ was shot in a very small cabin, it would feel like a totally different movie. So we knew that finding the lodge was one of the biggest challenges of the film.

We tried to stay very open-minded, because I think the lodge was described very differently in the script than the one we ended up using in the film. But we tried to stay open, see places and take in their atmospheres, and think about how we could represent those atmospheres and the character traits of the houses.

With the lodge we ended up shooting in, we fell in love with the attic; we thought it was the most amazing room in the whole house. There wasn’t an attic in the script, but we felt we needed to write something for it, and make is shine. As with actors, we want houses to bring in their own personalities to our movies.

SY: Thimios Bakatakis served as the Director of Photography (DP) on the movie. What was your experience of collaborating with him on determining how you would shoot the thriller?

Veronika Franz (VF): We knew from the beginning that we wanted to work with someone we felt comfortable with on the set. The DP is very important to us, as he’s our first collaborator. We knew that our DP from ‘Goodnight Mommy’ (Martin Gschlacht) couldn’t work on this film, so we looked for someone else.

We met Thimios in Cannes, at the film festival, and we knew his films, and are big fans of his work. So we met a few times to work on the atmosphere in ‘The Lodge,’ and came up with the idea of the wide angles from above and below. We also worked it out so that you can’t be sure if you’re in the lodge or (Mia’s) dollhouse.

Thimios is also a master of natural light. That was actually a big challenge, because there’s one point where we don’t have electricity in the house, so it’s very dark. But it was great to develop that aspect of the film with him, because he’s very courageous when it comes to darkness. It was a risk to not really be able to see anything on film. But he’s definitely more courageous than we are! (Franz laughs.) But overall, it was a great collaboration with him.

SY: ‘The Lodge’ stars Riley Keough, Richard Armitage, Jaeden Lieberher and Lia McHugh. What was the casting process like for the drama?

SF: When it comes to casting, it’s really about instinct and gut feeling. For the role of Mia, we auditioned many girls, and we were specifically looking for not-so-famous actresses. For the role of Aian, we knew beforehand that we wanted to work with Jaeden; we had seen him in different films, and felt he would be perfect.

For Riley‘s role of Grace, we spoke to several actresses. When we first talked to Riley, we instantly had the feeling that her honesty, vulnerability and gentle nature would would be right for the film. We didn’t know her well at first, but it ultimately proved to be the right decision.

SY: Once the actors were cast, did you have a chance to rehearse with them, and build the bond between the family?

SF: We feel very fortunate, because the actors are amazing. Where we come from in Austria, we feel they know how to prepare for their parts and read scripts.

But what they really can’t prepare for is when two people who don’t know each other in real life have to play a close relationships, like brother and sister, for example, like with Jaeden and Lia. So that was something that we wanted to focus on. Brothers and sisters really know each other, and that was something we really needed for the film. We could only create that on screen for our film by having Jaeden and Lia spend as much time together as possible.

VF: What also helped was that we tried to shoot in sequence. That way, we could also develop the characters on the way to shooting. It was easier for us, as well as the actors and actresses, to go as far as we could with the characters and story as possible on the way to the set. It also helped us to shoot in chronological sequence, because when we film on set, we can surprise each other with how far we go.

SY: What was the process of working with the actors to create their physicality?

SF: Physical aspects are always very important to us. Like Veronika said, we’re not fans of rehearsing in a classical sense, for the character’s emotional arcs. But in the physical sense, we wanted to have the stunts be very real, like in the scene where Jaeden and Lia’s characters are ice skating. That aspect of the script greatly mattered to us, and helped the actors and actresses form their full characters.