Chasing the American dream to California is a journey that many people do in their lives. But pursuing that ambition isn’t necessarily always as sunny and fulfilling as people initially believe. That voyage gone wrong is powerfully highlighted in the horror thriller, ‘1BR.’ David Marmor drew on his personal experiences of moving to L.A. to follow his filmmaking aspirations as he made his feature film writing, directing, executive producing and editing debuts on the drama.

‘1BR’ is being released on Blu-ray and DVD today, June 2, courtesy of Dark Sky Film, after the distributor unveiled the movie on VOD on April 24. The home distribution comes after the drama also received acclaim when it played at such film festivals as the Brooklyn Horror Film Festival and Fantasia Film Festival last year.

‘1BR’ follows Sarah (Nicole Brydon Bloom) as she tries to leave behind a painful past to follow her dreams. After she scores the perfect Hollywood apartment, she begins to realize that something isn’t right about it. Unable to sleep, and tormented by strange noises and threatening notes, her new life quickly starts to unravel. By the time she learns the horrifying truth, it’s too late. Caught in a waking nightmare, Sarah must find the strength to hold onto her crumbling sanity, or be trapped forever in an existential hell.

Marmor generously took the time to talk about writing, directing and executive producing ‘1BR’ during an exclusive interview over the phone. Among other things, the filmmaker discussed that he was inspired to write the screenplay after he moved to L.A., much like Sarah, and found himself living in an apartment complex that’s similar to the one that’s featured in the drama. He also mentioned that he felt Bloom was the perfect actress to play Sarah in the horror-thriller, as she was willing to bring the character where she needed to go.

The conversation began with Marmor explaining what inspired him to pen the script for ‘1BR,’ and what the scribing process was like. “The beginning of the development of the story was weirdly biographical. I moved to L.A., much like Sarah, when I was in my early 20s, and wanted to get into the movie industry. I found myself living in an apartment complex that’s pretty similar to the one that’s in the movie,” he revealed.

“I found it to be an isolating, alienating experience. There was just something about the surreal nature of walking around these sun-lit breezeways, and waving to these people I didn’t know anything about that felt like a horror movie. That was the very first genesis of the story, but it didn’t quite feel like a movie yet,” the writer further shared.

Around the same time, Marmor became “interested in the history of cults and utopian communities and religions, especially in L.A., which has created a lot of them. So I was reading about that topic,” he added.

“Then the two ideas came together in my head, and the whole story laid itself out at that point. I was then able to pretty quickly get through the first draft of the script,” the scribe further noted.

Marmor then delved into what the process of making his feature film directorial debut on ‘1BR’ was like, after he helmed several short films and a television show. “I almost never direct anything I don’t also write. So the way I work, everything is very much part of the same process. So directing, editing and all of the post-production work feel like an extension of the writing process to me,” he divulged.

“It’s amazing how much you can change the story not only in editing, but also in processes like sound design. So that all feels like one organic process in my mind,” the filmmaker added.

“With that being said, I have never felt anything like the intensity of directing a feature before. This is my first feature, as I’ve made several shorts and some episodic stuff before, but nothing to this scale before,” Marmor noted.

The helmer then admitted with a laugh, “I initially didn’t like it, as it was exhausting and very stressful. This was also the first time that I wasn’t the defacto boss. I directed and funded all of my shorts myself, so I was essentially also the executive producer.”

Marmor also revealed that “with ‘1BR,’ the producers put up all of the money, and they were in charge. So that added a whole dimension to the process that I had never experienced before, and made it more stressful for me. But I learned how to navigate that, which is a big part of being a feature director.

“In the end, once I was able to learn to trust the producers to do their part of the job, I learned that my main task as the director was to set the tone of the movie and set. I was able to create a positive, collaborative and calm space for everybody,” the filmmaker continued. “With a movie that’s shot as fast as this one, the set can be really chaotic and stressful for everybody. So I quickly learned that the best thing I could do was to shield everybody from that, and create a space that felt fun.”

With ‘1BR’ starring Bloom as Sarah, Marmor then delved into what the casting process like for the horror thriller. He admitted that “Casting that lead role was really tricky. We auditioned a lot of actresses, and a lot of them were on tape. Nicole is based in New York, so she sent her audition on tape, and it immediately caught all of our attention.

“I very strongly felt that she was our Sarah, as she felt like the character,” the director revealed. “She interpreted the scenes that I had sent perfectly. I intentionally choose some really difficult scenes for the audition, and she did surprising and wonderful things with them, so I felt very strongly about her.”

Marmor then admitted that he and the producers didn’t immediately cast Bloom in the role, however, despite her strong audition. “We had the opportunity to cast a higher profile actress, and the producers felt like we couldn’t pass that up. I couldn’t disagree with that decision, because we’re such a small movie, and having that actress would have really put us on the map that we wouldn’t have been otherwise,” he shared.

“But then a few days before we were supposed to start shooting, she dropped out, and we were left with the possibility that the movie would fall apart,” the filmmaker further revealed. “Then the producers immediately went after Nicole, and she was excited to do it. She said she would get on a plane right away, and flew out the next day.

“I think I met with her for coffee that evening, and the next day, we had about half a day to rehearse. She then rested for a day, and then we started shooting the next day,” Marmor added.

The helmer continued with a hint of a laugh by admitting, “That wasn’t the way I would have liked to cast that role. But in the end, we absolutely got the right person, and you could see it in every frame of her performance. I felt like it was the luckiest thing that happened to the production…She was so perfect in the role, and she was lovely to work with, as well. She was very positive, and willing to bring the character where she needed to go, and was so good.

“We only had time for a couple of takes most of the time, because we were moving so fast. There’s a lot going on with this character during most of the movie, and Nicole was able to get to these intense places very quickly. She’s an amazing talent,” Marmor further gushed.

The filmmaker then delved into what the process of collaborating with the movie’s stunt coordinator, Pete Turner, to create the stunts and physicality for Sarah was like during production. “There are some stunts. We had a stunt performer available for Nicole for a couple of the bigger scenes, if she felt she couldn’t do it. There’s one wide shot in particular where we used the stunt double, as Sarah collapses, and that could have been very dangerous if (Nicole) didn’t know what (she was) doing. But overall, I don’t think there’s anything besides that one shot that isn’t Nicole,” Marmor divulged.

“We worked with the movie’s stunt coordinator, Pete Turner, on set, and he’s a real pro; he’s been around for a long time. He made sure that people had the right pads on, and knew how to do the action in a way that would be safe. We would then rehearse the scenes at half speed, and try to get the moves right,” the director further shared.

“I don’t think actors always get enough credit for the amount of skill and training they have for what they do. They’re very attuned to their bodies, and able to pick up the moves and coordinate and choreograph with each other,” Marmor pointed out. “Nicole would just instinctively do the stunts…and would say, ‘Let’s do it,’ and was great at it…She would do whatever needed to be done to get the stuntwork done.”

In addition to the stuntwork, ‘1BR’s location helped create the story’s overall aesthetic. With a majority of the story being set in Sarah’s apartment and building complex, Marmor cherished the process of shooting on location in L.A.

“All of the exterior shots, including the courtyard, breezeway front and lobby area, were filmed in a real apartment complex up in Chatsworth. At our budget level, we had a lot of luck securing that location,” the filmmaker admitted. “It’s not like we had a lot of options of apartment complexes that were willing to let us shoot with the budget we had.

“But we had two choices, and we went with this one, and it felt weirdly perfect. It physically resembled the building I lived in when I was writing the script. So that made it easy for me to put myself in the right headspace,” Marmor shared. “It also had this amazing double personality where you would look at it from one angle, and it was really beautiful, as there were trees and shade, as well as a pool.

“Then you would turn your head another way, and it really looks like a prison block. It has these high gray walls,” the director also revealed. “That was really useful, given the role the apartment plays in the movie, and the way it evolves through Sarah’s experience. So it turned out to be a great location.”

“We had a lot more control over the interior, because we ended up building a set, which stood in for all four apartment interiors that are featured in the movie. Our amazing production design team would redress it overnight,” Marmor further divulged.

“This was the first time I ever got to do design the look of the sets for a movie, and that was really cool. So that space felt like what I really wanted it to feel like,” the filmmaker concluded. 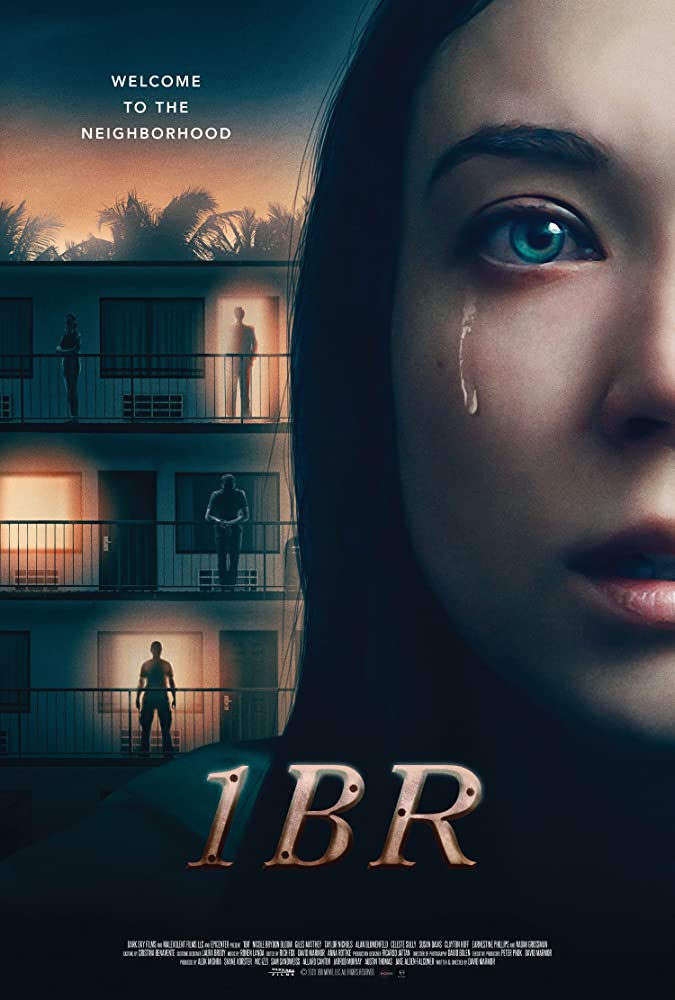