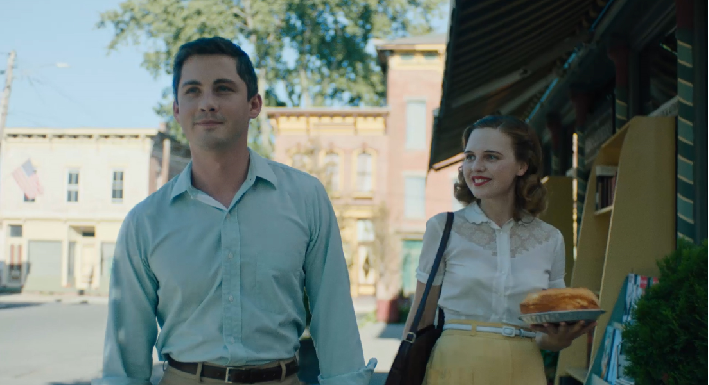 Encountering people who indulge in unorthodox measures, in both their personal and professional lives, can surprisingly lead to an unpredictable intimate relationship. That’s certainly the case with the eponymous character of ShirleymJackson and her new muse, Rose, in the upcoming biographical drama, ‘Shirley.’ The film explores how the real-life mid-20th century title writer largely remained reclusive in her home in North Bennington, Vermont during the latter years of her life, with the help of her unexpected protégé.

Not always trustful of the outside world, the author, who’s best known for such horror literature as 1959’s ‘The Haunting of Hill House,’ began to grow dependent on Rose, the wife of one of her husband’s colleagues, in the thriller. Despite Shirley’s initial disdain and distrust of the new woman in her life, the scribe eventually started using unconventional means to draw Rose further and further into her secluded life, and also grow more suspicious of the world around them.

Neon is set to release ‘Shirley‘ this Friday, June 5, on Hulu and VOD, and atparticipating Drive-Ins. The movie was directed by Josephine Decker. Sarah Gubbins wrote the film’s script, which she based on the 2014 book of the same name by Susan Scarf Merrell.

Set in the early 1950s at a conservative liberal arts college in small-town Vermont, ‘Shirley’ follows the deteriorating marriage and career of Shirley (Elisabeth Moss), who’s also known for her twisted short story, ‘The Lottery.’ She becomes upset with her husband, the free-spirited myth and folklore professor, Stanley Hyman (Michael Stuhlbarg), when he invites his new temporary teaching assistant, Fred (Logan Lerman), and his new wife, Rose (Odessa Young), to stay with them while they look for their own home.

Once the young newlyweds settle in, Shirley is especially drawn to rile the academic Rose, who must yield to the demands of Fred’s blossoming career, as well as the changes that are caused by her new pregnancy, which the couple have yet to announce. Shirley is intrigued by the couple’s dynamic, but is also upset that they, especially Rose, is intruding on her ability to write what she feels will be her masterpiece. Rose is also instantly drawn to Shirley, despite the several conditions that she’s plagued with, notably agoraphobia, and the volatile side effects that plague her.

The relationships between the four adults become even more unbearable when the middle-aged couple, who are prone to ruthless barbs at each other, begins to toy mercilessly with the naïve young couple who are living in their house. While Rose eventually serves as a muse to Shirley for her new book, the suspicions of the four adults against each other ultimately drove the two women to question their true identities and the meanings of their lives, especially in their marriages and friendship with each other.

Young generously took the time recently to talk about starring in ‘Shirley’ during an exclusive Zoom interview. Among other things, the actress discussed that she was attracted to portray Rose in the biopic in part because she was interested in sharing the screen with Moss, in order to showcase the unique dynamic between the two female characters. She also mentioned that she was intrigued by Decker and Gubbins’ interpretations of who the character and person of Jackson was, especially when it came to her creating her real-life and fictional relationships.

The conversation began with Young sharing what drew her to play Rose in ‘Shirley,’ and how she became attached to star in the drama. “The script was sent to me by a number of people. It was kind of floating around the town for awhile, because the role of Rose was incredible for a young woman,” she shared.

“I remember reading it, and Elisabeth Moss had come on board at that point,” the performer further revealed. “As I was reading the script, I thought, oh, she’s playing this firecracker of a character, and it would be so much fun to pitch myself against that. I think that’s what attracted me to the movie.

“It was also a well-written story about such a complex female relationship, specifically in the context of female creatives. There was a wealth of ideas and experiences to have fun with, and explore. It’s rare to get such a well-written script that feels like a play, and you can do so much with,” Young admitted. The story’s “specific, but it’s not limiting; it’s actually kind of freeing, and that was kind of exciting.”

Further speaking of working with Moss on the biographical film, the relationship between Rose and Shirley is turbulent when they first meet, which makes the young protagonist want to quickly move out of her husband’s colleague’s home. But as the two women get to know and understand each other, they unexpectedly become close. The two eventually become stuck in a codependent bond, which is fueled in part by Shirley’s depression and agoraphobia. So the process of creating the female characters’ increasingly codependent friendship was one that Young cherished.

“It was an absolute joy to work with Elisabeth; she’s the upmost professional,” the actress divulged. “The dynamics between Rose and Shirley is that Rose meets this woman who she’s known of, as well as her work. Rose is inspired by Shirley’s work, and admires her. So it was quite easy to slip into that dynamic,” she added with a hint of a laugh.

“I’ve obviously known of Elisabeth and her work, and am inspired by it. I think she’s one of the most incredible actresses currently working. So there wasn’t so much work that I had to prepare for that dynamic. Obviously, Elisabeth is a tad more personable than Shirley Jackson is! So in our relationship in real life, there was all of the admiration and inspiration, with none of the repercussions of an emotionally volatile, perhaps unstable, person that Shirley is,” Young also shared.

“I think Rose and Shirley’s relationship is a unique and interesting one. But its uniqueness isn’t undercut by the universality that’s the relationship of these two women, one of whom can lead the other. I think that Shirley can lead Rose through certain realizations, including that perhaps her social standing and role as a woman in the 1950s, particularly as a wife and homemaker, perhaps aren’t realistic for women who feel that they have other tings to say,” the performer pointed out.

“That’s a universal character dynamic, but it’s explored in such beauty and grace in this film. The story also explores a horror, intrigue and messiness that are all a reality of the human experience,” Young added.

Further speaking about the female experience, the actress then delved into how ‘Shirley’ was directed by Decker, and what her experience collaborating with the filmmaker on the character development of Rose was like during the production of the thriller. “I think that Josie’s an incredibly symbolic director, and incredibly intuitive. I think a lot of that intuition is actually a throughline in the movie. She’s also quite spiritual, and pays attention to the underworld of the story,” she shared.

“With Josie as our leader, the movie started to become this manic expression of what it’s like to conjure the creativity to direct a film. That was also the throughline in her work in (her 2018 mystery thriller,) ‘ Madeline’s Madeline.’ She really explores her process through her characters, and there’s a taste of that in this movie, as well,” Young expressed.

“As female creators, each of us are going through our own process, which is actually reflected in the film itself, and is a really interesting thing to discover,” the performer also admitted. “So the term, fearless leader describes Josie perfectly, because she knew all of these secret things that each of the characters are going through. She’s put her own experiences into that process.”

With Jackson being a real-life, acclaimed writer from the mid-20th century, and the movie being based on Merrell’s book, Young read the novel, in an effort to better understand the title character’s life. “There was a lot from the book that was changed for the movie, however, specifically the time period. The book discusses how Shirley has children running around. But our screenwriter, Sarah Gubbins, decided to set the film’s story during a time when Shirley wouldn’t have had children,” the actress revealed.

“That way, we could focus on the similarities between Shirley and Rose, as the two female participants in the story. So reading Sarah’s interpretation of who the character and person of Shirley is, who wrote all of these quite horrifying stories, was an amazing experience. Her brain goes to all of these places that are so dark, yet simultaneously so smart and well thought out,” Young declared. “I really think that Sarah was able to really personify a lot of Shirley’s writing, especially the characters she created. So there was a seamless transition between fact and fiction.”

The performer then delved into how the biographical thriller also stars Lerman as Rose’s husband, Fred, and what her experience of collaborating with him on developing the married characters was like during production. “Logan and I knew each other before we started shooting, through a mutual friend of ours. He’s an incredibly easy person to get along with, and is the nicest person you’ll ever meet,” she gushed. “He’s also an undeniably phenomenal actor. So it was incredibly easy to work with him.

“We bonded over certain things in real life, like how we like the same music. We also loved this script for the same reasons. So there was quite an effortless relationship between us from the beginning,” Young further shared.

“Obviously, the relationship between Rose and Fred in the movie is passionate. There are some scenes in the film between us that are quite sexual. So if anyone else had been playing Fred, it might have been more challenging to shoot those scenes,” the actress admitted. “I was so lucky to have Logan to be my scene partner in those scenes, because he’s really comforting, welcoming and nonjudgmental. He created a really safe place to create those scenes. So I was really lucky to have him by my side.”