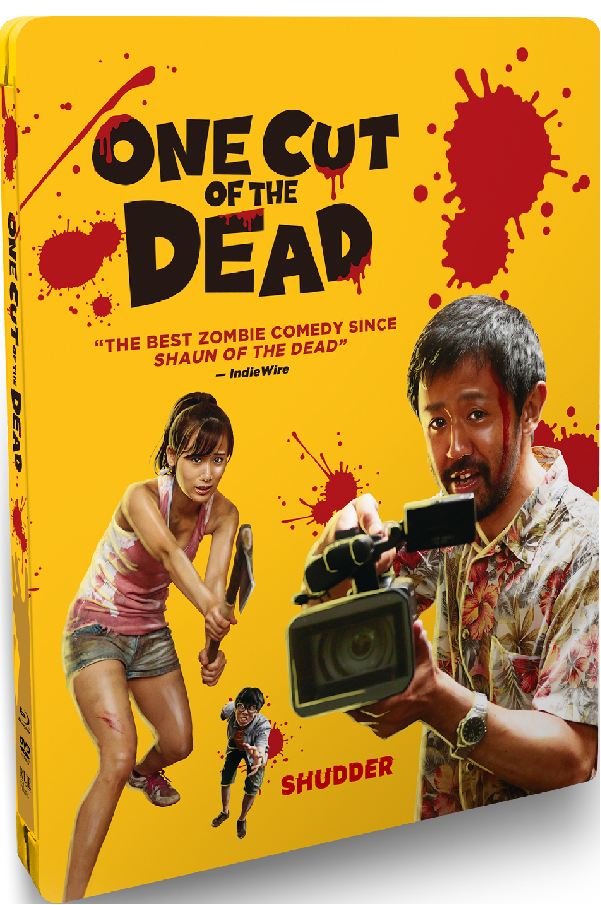 The DVD/Blu-ray SteelBook. cover for director Shin’ichirô Ueda’s zombie horror-comedy, ‘One Cut of the Dead.’

Heads are set to turn today, as RLJE Films is releasing the zombie horror-comedy, ‘One Cut of the Dead,’ on DVD and DVD/Blu-ray SteelBook. The distributor picked up select rights to the movie from Shudder, after the feature was initially unveiled on VOD AND Digital HD last December.

In honor of ‘One Cut of the Dead’s home release, ShockYa is offering two lucky winners a Blu-ray/DVD Steelbook of the horror-comedy. To enter, email us at ShockyaGiveaway@aol.com. Let us know that you’re entering to win the ‘One Cut of the Dead’ Blu-ray/DVD Steelbook giveaway in the email’s subject line, and include your mailing address in the message. You have until next Tuesday, June 9, to enter, and you can enter the contest once daily. On June 9, we’ll pick the winners at random, and notify them through email. Good luck!

‘One Cut of the Dead’ is based on the play, ‘Ghost in the Box!,’ which was penned by Ryoichi Wada. The movie adaptation was written and directed by Shinichiro Ueda, and stars Takayuki Hamatsu, Mao, Harumi Shuhama, Kazuaki Nagaya, Manabu Hosoi, Hiroshi Icihara, Syuntaro Yamazaki, Shinichiro Osawa, Yoshiko Takehara, Miki Yoshida, Sakina Asamori, Ayana Goda and Yuzuki Akiyama.

The following synopsis for ‘One Cut of the Dead’ has been released by RLJE Films:

An eccentric and determined director sets out to shoot a low-budget zombie film at an abandoned warehouse. Suddenly the cast and crew find themselves in the middle of an actual zombie invasion. Delighted with the all-too-real turn of events, the director insists that the crew continue filming to capture the terror in all its glory. Now the actors must work together to escape this deranged filmmaker, or this may be their last performance.

Aggregate Rating
no rating based on 0 votes
Brand Name
RLJE Films
Product Name
'One Cut of the Dead'
Price
USD DVD/Blu-ray SteelBook for an SRP of $34.97; DVD for an SRP of $27.97