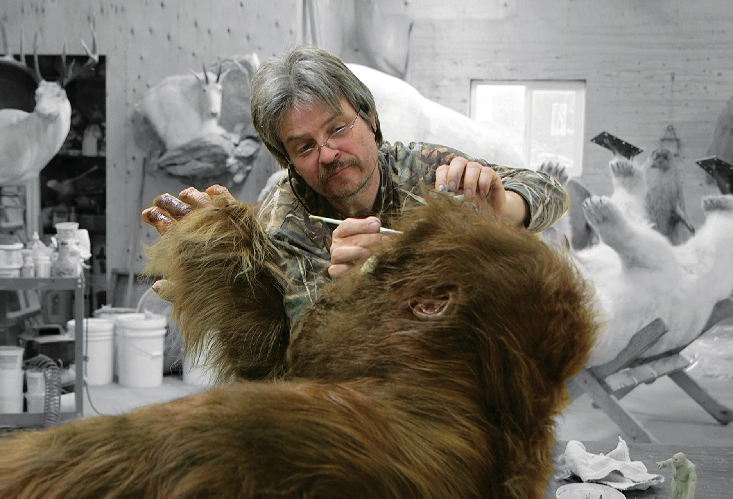 Art is meant to encourage the uniqueness in the designer’s creative process, but in a tragic twist of fate, some eccentric inventors have instead become outcasts. That’s certainly the case for the producers in the field of taxidermy, including three-time world champion, Ken Walker. But the taxidermist, who’s acclaimed within his field, is now receiving his long overdue recognition by the rest of the world in the new documentary, ‘Big Fur.’

The movie is now available on VOD and Digital, including iTunes, Amazon and Google Play, courtesy of 1091 Pictures. ‘Big Fur’s official release comes after it received rave reviews on the film festival circuit, including at this year’s Slamdance Film Festival. The feature was directed and produced by Dan Wayne, who also served as the cinematographer, an additional editor and the sound recordist, in his feature film debut.

‘Big Fur’ follows Walker as he specializes in re-creating extinct and endangered species out of other animal’s hides, including his famous saber-toothed tiger and giant panda. But wild animals aren’t the only things that the taxidermist works on; he’s also known for his eight feet tall re-creation of the female Bigfoot, Patty.

The movie documents Walker’s meticulous Bigfoot re-creation from start to finish, after which it’s unveiled at the World Taxidermy Championships. While he would have loved to win Best in Show, his real hope was that putting Patty on display will prompt a hunter to show the proof that Bigfoot is real. The champion taxidermist holds an unshakable belief that eventually he’ll find the 800-pound animal in real life, which will validate his career’s quest.

The narrative also gives an insider’s view of taxidermy as an under-appreciated art form. It also offers a call to preserve the last wilderness, because when there isn’t any mystery left in the forest, humanity will have lost more than Bigfoot.

Wayne and Walker generously took the time recently to talk about directing, producing and appearing in ‘Big Fur’ during an exclusive video interview over Zoom. Among other things, the filmmaker and taxidermist discussed why Wayne was driven to helm the documentary, why Walker was inspired to become a taxidermist and create the life-size model of Bigfoot, and why they both felt it was so important to highlight the masters in the field of taxidermy in the movie.

Watch our exclusive video interview with Wayne and Walker about ‘Big Fur’ above.