Interview: Jim Hanft and Samantha Yonack Talk After So Many Days (Exclusive)

Offering raw and intimate insight into how unpredictable life circumstances influence the creative process of artists has been a powerful experience this year, as both musicians and filmmakers have had to learn how to navigate their careers during the current COVID-19 pandemic. That’s certainly the case for Los Angeles-based singer-songwriter-filmmaker husband and wife duo, Jim Hanft and Samantha Yonack.

After marrying in 2017, the couple made the impulsive decision to tour together, and play a live performance every day for a year, in an effort to try to achieve the conventional success they long for, after they began playing together almost a decade before. Embarking on what they called The Anywhere Everyday Tour, Hanft and Yonack traveled throughout 14 different countries, and played at whatever venue, no matter how big or small, would offer them the time and space to perform. The musicians decided to showcase their journey to achieve the success so have so longed desired to find on the tour, and how the coronavirus has since also impacted their ongoing ambitions, in their new documentary, ‘After So Many Days.’

The singer-songwriters-turned-filmmakers made their feature film writing, directorial, cinematography and producing debuts on ‘After So Many Days,’ which Hanft also made his editing debut on. The duo also served as composers on the movie, whose soundtrack, ‘Songs from After So Many Days,’ is now available, courtesy of Nettwerk Records. The documentary, which was an official selection at more than 30 film festivals worldwide, is now playing digitally on such platforms as iTunes and Amazon, courtesy of Gravitas Ventures.

‘After So Many Days’ follows Hanft and Yonack as they come to terms with the fact that they’re not the conventionally successful band they’d hoped they’d be, which leads them feeling stuck and anxious about their future. So the musicians make the spontaneous decision to put their music and marriage to the ultimate test by making a pact to play one show every day for a year. With suitcases and a guitar, the duo ventured out for a 365-day tour down unexplored roads and onto unexpected stages, which brought their music to new audiences throughout 14 different countries.

Hanft and Yonack generously took the time recently to talk about appearing in, directing, shooting, producing and composing ‘After So Many Days’ during an exclusive phone interview. Among other things, the singer-songwriters-filmmakers discussed that they decided to make, and direct, the movie because they wanted to do showcase their process of reinvigorating themselves as musicians, and the spontaneity that went along with their process of performing in different settings every day. They also mentioned that the tracks that are featured in the documentary are lyrically and thematically representative of what they were feeling in each scene.

ShockYa (SY): Together, you made your feature film writing and directorial debuts on the new documentary, ‘After So Many Days.’ What inspired you both to make the movie?

Jim Hanft: The idea for the film came first. The idea was that we were frustrated, and wanted to do something that would reinvigorate ourselves as musicians and touring artists. We developed the idea several years back during a conversation we had with a music producer. We were commiserating about the difficulties of being an independent artist, and they said, “You should just play every day,” and that planted the seed.

Then several years later, the idea popped back up into our heads, and both of us didn’t back out of it. It was a crazy idea, but we both knew it was something we wanted to do, so we decided to do it.

Samantha Yonack: In regards to the filming of it all, we had no idea where the tour was going to lead us, but we knew we wanted to capture whatever that was. That’s when the idea of the film came along. We filmed every single day with whatever camera we had.

SY: How would describe your helming style while making the film?

Yonack: The tour and the performing came first. After filming every single day, I would say that the camera became the third member of the band. It captured every performance, every car ride and every hotel room. Where ever we were, there was the camera. It became more natural as the days went on.

Hanft: With appearing in the film and directing it, it got to the point were we got so used to the camera being on that we forgot that it was there. That’s when you’re really able to live in the moment.

ShockYa: Speaking of the camera, you both also served as the cinematographers on ‘After So Many Days.’ What was the process like of deciding how you would shoot the documentary?

Hanft: There’s only so much you can shoot when you’re also the performer. So when it came to a lot of the stuff we could handle, we tried to be as creative as we possibly could, especially when we weren’t just performing shows.

There are a lot of landscape performances that served as this geographic throughline through the film. Those were born out of us making landscape videos, after which we realized that they were part of the story.

We were lucky enough to have a few (camera people work with us) along the way, who came out sporadically throughout the tour. That allowed us to have the cameras rolling as much as possible.

Yonack: At first, we were really focused on capturing performances. But then we realized shortly after that that wasn’t the most interesting part of the tour. So we started capturing everything else. We also realized that only having one camera wouldn’t do us justice, so we started setting up three or four cameras for different shots.

Hanft: When you’re filming something in real time, you’re trying to capture real life. So whatever camera was the closest was what we used; it didn’t matter which one it was…We learned to be creative.

Yonack: Yes, it was less about the camera, and more about capturing the moment.

ShockYa: In addition to directing the movie, you both also served as producers. How did you balance your producing and directorial styles while making the film?

Yonack: Yes, we were trying to put the story together. We then brought on (their fellow producers,) Kyle (Weber) and Natalia (Anderson) to help shape the film after that. They were a second pair of eyes to shift through the footage with us, and help us tell the story.

Hanft: With this being our first film, their experience on the post-production side helped us, including on the coloring and audio sides. So it was really great to have a team that had that experience so that we could merge the music and filmmaking worlds.

SY: Speaking of the post-production process, besides producing, helming and shooting the documentary, Jim, you also co-edited the movie with Kyle. What was the experience like of editing ‘After So Many Days?’

Hanft: The editing process was good.

Yonack: The editing process was a mountain, because we had so much footage. There were so many things that happened throughout the year that in the moment were so magical. But when it came down to pick things for the story, they just didn’t work. It was a really hard thing to let go of the moments that we really wanted to share, but just didn’t serve the story. So the editing process was just a push and pull of finding the right pieces for the overall story.

SY: The film’s accompanied by a full-length album, ‘Songs from After So Many Days,’ which is now available, courtesy of Nettwerk Records. How did you decide which songs to include in both the documentary and on the soundtrack?

Hanft: The songs that ended up in the film were lyrically and thematically tied to whatever we were going through at the time. There’s a song called ‘Calling it Quits’ at the beginning of the film, and it speaks to where we were at when we started the tour. We were frustrated, but not necessarily ready to quit just yet. But we were contemplating it, just like anybody who’s pursuing any uphill battle.

The songs were changing and updating constantly throughout the tour, as we were finding our footing. We were inspired by what was around us. By the last track at the end, ‘After So Many Days,’ which is also the name of the film, takes on a much more reflective, almost nostalgic, feeling of what we just went through.

When it came to the soundtrack, it was the same point of deciding what to leave in and out. That was the opportunity to tell some of the stories that we couldn’t fit into the film.

SY: ‘After So Many Days’ screened at the Nashville Film Festival this month, and has also been an official selection at more than 30 film festivals worldwide. What was the experience like of bringing the documentary to the festivals?

Yonack: We’re so grateful that we had the opportunity to be involved in the festival circuit before everything shut down. We had the opportunity to go out and play the film in front of audiences. That was such an amazing experience, because we were able to go out and hear people laugh, and hear about the way they feel about it. Afterward, we were able to play a couple of songs, which was really fun.

Now that things have shut down, I think the film festivals have done an amazing job with doing everything they can to bring the filmmakers together, and show their films to audiences.

SY: The movie is now available to stream digitally on such platforms as iTunes and Amazon. What has the experience been like of releasing ‘After So Many Days’ this way?

Hanft: We’re all experiencing the fact that we can’t connect with people in the way that we used to before the pandemic. The release so far has been really encouraging. It’s exciting that we have this story to share with people during this really tough time. There’s so much division with what’s going on in the country with the pandemic that it feels really nice to be putting something out that gives a positive message about humanity and human connection. So I feel like it’s good timing for the film to be coming out right now. 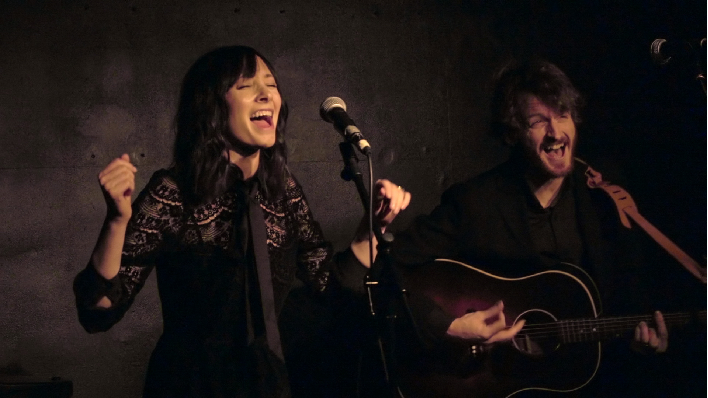 Name
Jim Hanft and Samantha Yonack
Website
https://www.wearejimandsam.com/aftersomanydays
Job Title
Co-writer-directors-producers-cinematographers-subjects of the music documentary, 'After So Many Days'