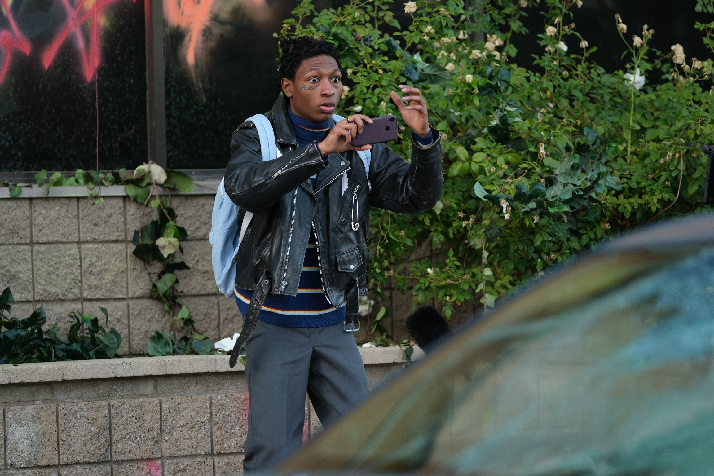 Sometimes it takes a driven and persistent young adult who’s determined to capture their own fame and celebrated triumphs to help an older, more experienced person realize that their supposed long-gone glory days don’t have to have disappeared for good. That’s certainly the case for Skylan Brooks and Joe Manganiello’s distinctive characters in the new superhero drama, ‘Archenemy.’ The two unique anti-heroes have their own particular unexplored dimensions that differentiate them from the typical protagonist in the superhero genre, but they still work well together to achieve their own forms of prestige.

The action movie was written and directed by genre scribe-helmer, Adam Egypt Mortimer. RLJE Films is releasing the thriller today in theaters, as well as On Digital and On Demand.

‘Archenemy’ follows Max Fist (Manganiello) as he claims to be a hero from another dimension who fell through time and space to Earth, where he has no powers. No one believes his stories except for local teen reporter, Hamster (Brooks). Together, they take to the streets to wipe out the local drug syndicate and its vicious crime boss known as The Manager, who Hamster’s sister, Indigo (Zolee Griggs), is working for as a drug dealer.

Brooks generously took the time recently to talk about starring in ‘Archenemy’ during an exclusive interview over the phone. Among other things, the actor discussed that he was drawn to play Hamster because he’s different from the characters that he’s played before, and he also embraced Mortimer‘s vision for Hamster’s arc throughout the drama. He also shared that he embraced the fact that he was able to rehearse with Manganiello and their co-stars for about a month before production on the movie began, as the process helped them push themselves and each other to become comfortable with their characters and the story.

The conversation began with Brooks explaining what attracted him to not only the role of Hamster, but also ‘Archenemy’s overall story, and how he became attached to the project. “My agent sent me (the script for) the film, and I gave it a read. I was really interested in Hamster because he’s a different kind of character that I haven’t really played before,” he reveald. “So I wanted to give it a try, and tell the story realistically and authentically.

“So I took it upon myself to take a meeting with the writer-director, Adam, just for context, and asked, ‘What made you write this script and Hamster as a character?,'” the performer revealed. “I then eventually auditioned and got picked for the role, and then solidified with the rest of the cast to play Hamster.”

Once Brooks was cast as Hamster, he felt that there were elements in the character that he could easily relate to while he was shooting the thriller. “I really felt that he was passionate. He has this blind passion and recklessness to chase whatever he believes in, and tell stories because of his father, who was a storyteller. He just wants to chase that idea and fulfill his own idea of what that means to him,” he shared.

“I feel like I was able to relate to him in the sense that I also have a burning passion to accomplish things on my own, and fill out my own vision,” the actor declared. “That’s where I feel like we relate the most. I wanted to show that in an authentic way that would fulfill the storytelling. That was a challenge that I was really interested in, and it was really fun to take on.”

In addition to Hamster’s personality and arc throughout the story, Brooks was also interested in the fact that ‘Archenemy’ puts a spin on the superhero genre. Instead of showing Max’s origin story or fall from grace, the plot reflects on the physical and emotional aftermath he faces after he lost his powers, especially the fact that no one on Earth believes him, except for Hamster, who does doubt him at times.

“That was part of the big motivators to treat this (story) differently, because it does have this element of not being the average superhero film; in a sense, we’re almost working backwards; we start at ground zero, and work towards Max becoming a hero again,” the performer noted. He also pointed out that “When you see most superhero films, they already have their powers, and people are in awe of how great this person is, and how he can save everybody. But it’s reverse in this case.

“But it’s all good-natured, and coming from a good place; (Hamster) wants to get the story out there for people to see. I felt that was an interesting dynamic between them, and it created this push and pull effect. You want (Max) to get his story told, but you also want to feel his redemption. I feel like that works to the benefit of both characters,” the actor added.

Brooks also embraced the process of balancing the struggle Hamster has, especially when he first meets Max, of wanting to believe his new friend, but also knowing that his story sounds implausible. “I do feel that in the very beginning, (Hamster) does have a sense of, I do want this job at this network, and I want to be a reporter. That’s part of the reason why he works so hard and tirelessly to come up with something that’s interesting and could go viral,” like Max’s story, he divulged.

“But over time, (Hamster) really begins to understand Max and how much of a broken person he is,” the performer continued. Over time, his character “wants to fulfill that fantasy for Max, and make him feel like a hero again. He feels this deep intuition that (Max) is a superhero. But (Hamster’s) actually feeding Max’s ego throughout the film, and giving him a false sense of security and reality, just so that he’ll do heroic stuff. That way, (Hamster) can prove to other people-and Max-that he is who he says he is.

“I do feel that was a bit reckless on Hamster’s part,” Brooks admitted. “I do think he’s doing that partly because he wants to get a good story. But he does start to realize that Max is lonely, and he doesn’t want to fully capitalize off of his pain.”

In order to build the relationship between Hamster and Max, as well as Hamster and his sister, the actor was able to spend time with his co-stars before they began shooting the film. “We had about a month of rehearsal time. During that time, I was actually shooting a show, so I was splitting my time between ‘Empire’ on FOX and…diving into the script (for ‘Archenemy’).

“Every time we had those rehearsals, we were all invested. The rehearsals lasted about three to four hours, and we would spend so much time trying to get to know our characters, so that we could show that we knew how their relationships worked on camera,” Brooks shared. “We did a lot of exercises to help push ourselves and each other into a comfortable place, so that we could apologetically be our characters, and feel okay with the path they were going down…Overall, the process was fun, and despite any setbacks, we were all on the same page.”

In addition to highlighting Hamster’s emotional arc throughout ‘Archenemy’s story, the performer also embraced the physicality he brought to the role. During the production, “I was actually sick and had the chills, and was in and out of the hospital about three or four times. I couldn’t breathe, as I had the pneumonia and bronchitis, and it was bad, so I was struggling,” he revealed.

“But in the film, my character is the happiest guy on Earth; nothing can get him down. So I had to psych myself out, and think about the film, including Joe’s character, as well as Adam, our director,” Brooks continued. Hamster’s “the glue that keeps everyone together, so I had to remember that when I had to psych myself out into those moments. I also had to be aware of how I felt internally, without externally showing the pain of how I felt.”

One part of Hamster’s physicality that the actor felt that he needed to focus on was the way he walked. “I felt that I had to give him an uppity walk, but not that strange that I looked like I was trying to walk differently. But I wanted to make an effort to show that he was completely different than what you’d expect from a kid who has a tattoo under his eye,” he divulged.

Hamster’s “very high energy, but also very sincere when it comes to being himself. I had to work on making sure that in every scene that he has this embodiment of energy and charisma. But I also felt like I spent a lot of time trying to find a way for him to get around. I feel like the way he dresses already draws enough attention, so I had to find a way to create this uppity walk that didn’t draw too much attention,” Brooks added.

Besides working with his co-stars, the performer felt that collaborating with Mortimer as the drama’s scribe-helmer was extremely integral to the way he created Hamster’s emotional arc and physicality throughout the story. “One reason why I asked to meet him was that when I read the script, I was intrigued by how reckless Hamster is in the way that he chooses his situations. So I needed to understand why he does what he does; was it just blind trust and faith in Max, because he heard that he’s a superhero?,” he revealed.

“If it wasn’t for Adam being able to explain his inspiration in writing this character, it would have been extremely hard for me to tell his story. I also feel that if I didn’t know Adam’s motivation behind the entire piece, I wouldn’t have been able to do the piece, and do it justice,” Brooks admitted. “I feel like at the end of the day, having a strong connection with Adam, as well as with wanting to tell his story, helped me help the audience get it,” he concluded.