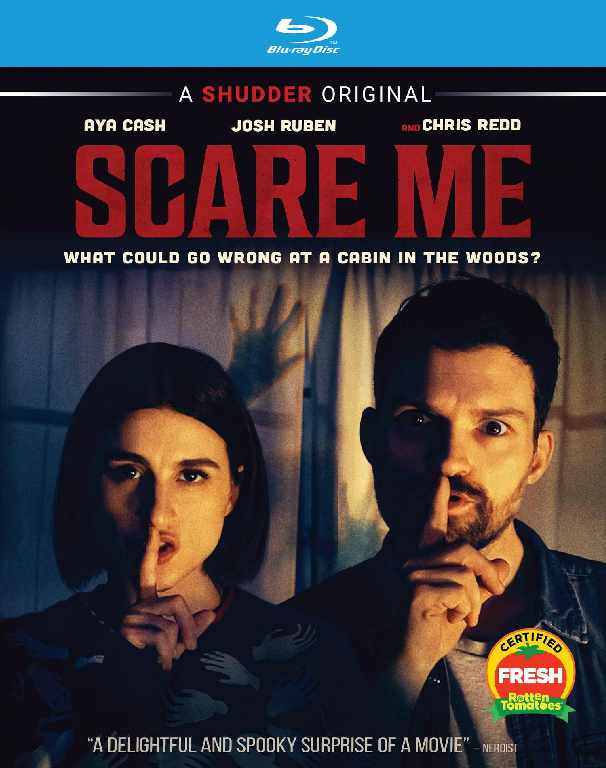 A little competition is usually a healthy means for people to engage in society-unless the competition ultimately scares them to death. That’s certainly the case for the protagonists of the horror comedy, ‘Scare Me,’ which features actor Josh Ruben and actress Aya Cash’s characters as they battle to the death of who can frighten the other more.

RLJE Films is set to release the movie on Tuesday, March 2 on Blu-ray and DVD, after it had its World Premiere at the 2020 Sundance Film Festival. ‘Scare Me’ will be sold on Blu-ray for an SRP of $$28.96, and on DVD for an SRP of $27.97. The discs will include several special features, including: director and cinematographer commentary; interviews with the cast; behind-the-scenes photo gallery; ‘Make Cool Sh!t’ Podcast Episode 1: ‘Scare Me;’ outtakes; and ‘Feel the Music, Feel the Light’ music video.

In honor of ‘Scare Me’s disc release, ShockYa is offering two lucky winners a Blu-ray of the horror comedy. To enter, email us at ShockyaGiveaway@aol.com. Let us know that you’re entering to win the ‘Scare Me’ Blu-ray giveaway in the email’s subject line, and include your mailing address in the message. You have until Tuesday, March 2, the day of the discs’ distribution, to enter, and you can enter the contest once daily. On March 2, we’ll pick the winners at random, and notify them through email. Good luck!

‘Scare Me’ marks the feature directorial debut of Ruben, who also wrote the screenplay. In addition to the filmmaker and Cash, the movie also stars Rebecca Drysdale (‘Arrested Development’) and Chris Redd (‘Saturday Night Live’).

In ‘Scare Me,’ two strangers, Fred and Fanny (Ruben and Cash), are stuck in their Catskills cabin during a power outage. Looking to pass the time, they decide to tell each other scary stories. But the more Fred and Fanny commit to their tales, the more the stories come to life. As the horrors of reality manifest, Fred confronts his ultimate fear that Fanny may be the better storyteller, which forces him to craft the most horrific tale imaginable, and put an end to the competition for good.