Examining the current turbulent times through a comedic lens, and ultimately provoking empathy for the struggles different cultures contend with in a global audience, is a powerful and necessary journey that many filmmakers choose to take on during their careers. That’s certainly the case for filmmakers Julian De Zotti and Lisa Baylin, who highlight such challenges as maintaining romantic and familial relationships and pursuing career goals, against a backdrop of various musical genres, in their latest artistic endeavor, the anthology television series, ‘For the Record.’

The short form show comprises of six episodes that range in length of 11-17 minutes. De Zotti wrote and served as the showrunner on the comedy-drama, and starred in four episodes. He and Baylin also directed one episode each, and executive produced ‘For the Record.’ Besides De Zotti, the series also stars Anna Hopkins, Julian Lyriq Bent, Alexandra Beaton, Karen LeBlanc, Maurice Dean Wint, Kyra Clavell, Moni Ogunsuyi, Alannah Ong and Johnny Orlando.

The Canadian show, which had its U.S. Premiere this past March during SXSW Online, as part of the Episodic Pilot Competition section, follows Ray and Angela (De Zotti and Hopkins) after they just broke up. While going through their extensive, eclectic record collection, in an effort to determine who should keep each album, they ponder what would happen if the iconic songs they love had the power to bring them back together. Their tragic break-up is interwove with the stories of other people they know who are also contending with emotional pain, which are set against the songs that mend their broken hearts.

De Zotti, who’s a Canadian Screen Award nominated creator, and Baylin, who’s an Emmy Award winning producer, generously took the time during SXSW to talk about writing, directing, producing and starring in ‘For the Record’ during an exclusive interview over Zoom. Among other things, the filmmakers discussed what inspired them to make the comedy-drama, and what the process of penning the plotlines for each episode was like. The duo also delved into why De Zotti decided to star on the series, and what the casting process was like for the other performers. They also shared what it meant to them to have the show make its U.S. premiere during the Episodic Pilot Competition at this year’s SXSW.

Watch our exclusive video interview with De Zotti and Baylin about ‘For the Record’ above. 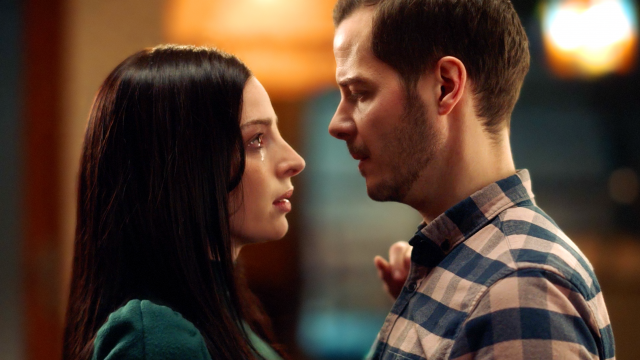