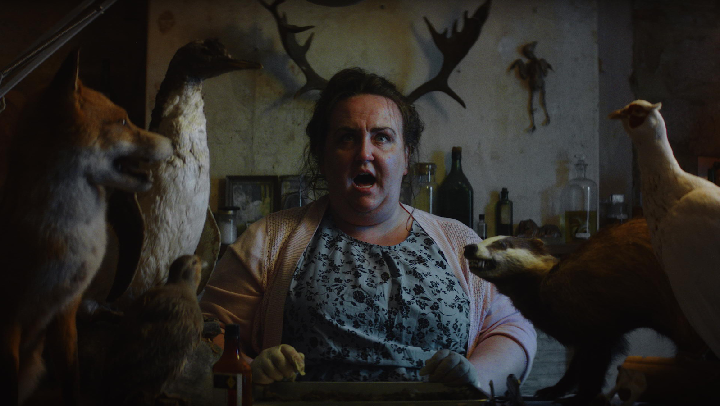 Actress Alison Fitzjohn stars in the musical horror short, ‘Stuffed,’ which was directed by Theo Rhys, who co-wrote the script with composer Joss Holden-Rea.

Finding a person who truly understands their sentiments is an emotion struggle that many people contend with throughout their lives. Araminta and Bernie, the protagonists in the new short film, ‘Stuffed,’ are two such people who feel as though they’re not accepted for who they truly are until they meet each other. However, their relationship forms under a unique circumstance that may appear to be peculiar to the rest of the world.

The two characters in the 19 minute musical horror movie was directed by Theo Rhys and composed by Joss Holden-Rea. The duo also wrote the script together, which features Araminta and Bernie breaking into song whenever they feel the need to freely express their true feelings, and don’t think they can truly do so in a normal conversation.

Hailing from the United Kingdom, ‘Stuffed’ had its North American premiere this past March in the Midnight Shorts section of SXSW Online 2021. It went on to win the Special Jury Recognition Award for Bold Vision, as well as the Midnight Shorts’ Audience Award.

‘Stuffed’ follows a lonely taxidermist, Araminta (Alison Fitzjohn), who dreams of stuffing a human. So she searches for a willing participant online, and eventually connects with Bernie (Anthony Young), who’s so afraid of aging that he volunteers to be her specimen. When a romantic connection unexpectedly sparks between them after they meet in person, their plans become increasingly complicated.

Rhys and Holden-Rea generously took the time during SXSW to talk about writing, directing and composing ‘Stuffed’ during an exclusive interview over Zoom. Among other things, the filmmakers discussed what inspired them to pen the screenplay, and how they approached creating the story, as well as the songs, together. They also discussed what the casting process was like for Fitzjohn and Young, and how they worked with the performers to bring their characters’ arcs to the screen. Rhys and Holden-Rea also mentioned what it meant to them that the musical short its North American premiere at this year’s SXSW.

Watch our exclusive video interview with Rhys and Holden-Rea above, and the trailer for ‘Stuffed’ below.