In an ever changing and at-times frightening world, the bond of family is often what keeps people’s spirits lifted and gives them hope that they can survive. That’s certainly the case for the cast, crew and characters of the hit action franchise, ‘The Fast Saga.’ Its latest entry, ‘F9,’ which was directed by Justin Lin, is proving that overcoming conflict is what the characters do best, even when the most terrifying aspects of life are a direct result of one of their relative’s actions.

‘F9’ marks the return of Lin to the series, after he previously helmed four earlier installments in the series, including ‘The Fast and the Furious: Tokyo Drift,’ ‘Fast & Furious,’ ‘Fast Five‘ and ‘Fast & Furious 6.‘ The director also co-wrote the eighth sequel in the franchise with Daniel Casey, and served as one of its producers.

Universal Pictures is distributing ‘F9’ in theaters today, after more than a year of delays. The thriller was originally scheduled for worldwide release in April of last year, but was delayed due to theaters closing in the wake of the start of the COVID-19 pandemic.

‘F9’ follows Dom Toretto (Vin Diesel) as he’s leading a quiet life off the grid with Letty (Michelle Rodriguez) and his son, little Brian, but they know that danger always lurks just over their peaceful horizon. This time, that threat will force Dom to confront the sins of his past if he’s going to save those he loves most. His crew, including Roman (Tyrese Gibson), Tej (Chris “Ludacris” Bridges), Ramsey (Nathalie Emmanuel), Sean (Lucas Black) and Han (Sung Kang), who they previously thought had died, as well as Dom’s sister, Mia (Jordana Brewster), join together to stop a world-shattering plot led by the most skilled assassin and high-performance driver they’ve ever encountered: Dom and Mia’s forsaken brother, Jakob (John Cena).

Lin generously took the time recently to talk about co-directing ‘F9’ during a virtual press conference. Among other things, the filmmaker discussed that he was largely interested in returning to ‘The Fast Saga’ because of not only the fans’ passionate support for Kang’s character of Han through the #JusticeForHan movement, but also the opportunity to further explore the theme of family, especially through blood relatives. The helmer also noted his enthusiasm for giving the female characters a bigger role in not only the series’ emotional trajectory, but also its stunts.

The filmmaker then shared what the most challenging aspect of making the drama was during its production. “When I’m making a film of this size, every morning when I wake up at 4am, there’s a different sense of challenge; it could be something that we’re shooting a continent away, for example. I wanted to make sure the lenses I chose articulated the cars in the way that we planned,” he stated. He added with a laugh, “Or it could have been as simple as making a three-year-old feel like Dominic Toretto is really his father.

“I think it’s a mix that makes it exciting. But at the same time, I feel like we’re doing the right thing, and there’s a new challenge every day,” Lin added.

One of the most anticipated aspects of the follow-up for fans is seeing the return of Kang as Han for the first time since ‘Fast & Furious 6.’ The character’s return brought some challenges of its own, as it was previously believed that he had died in The Fast and the Furious: Tokyo Drift.’ Despite those challenges, the director embraced the idea of bringing the fan favorite character back to ‘The Fast Saga.’

“I give the fans 100 percent credit for the #JusticeForHan movement. When I was away (from the series,) I heard about the movement. When I asked about it, I was equally baffled, and a little bit upset, that one of our most beloved characters was being dismissed,” Lin admitted.

“But when I look back now, I actually feel very fortunate, because if there was never that movement, I don’t think I was going to bring Han back. So I give the fans’ passion and vocal support all the credit,” the filmmaker added.

Another aspect of the franchise that fans cherish is the stunt work, which are known to become bigger with each entry, and support the characters’ evolutions. Lin then shared what the experience of creating the action sequences for each installment he’s worked on in ‘The Fast Saga’ has been like, especially ‘F9.’ “For me, it’s really about trying to support our characters. We made a commitment early on to say, ‘If we’re lucky enough to earn another chapter, let’s really acknowledge that these characters are going to grow and have real-life issues like everyone else,” he pointed out.

“I’ve been a part of the franchise for 15 years, and we’ve seen the characters settle down together, and they now have kids. So to be able to acknowledge that evolution allows us to push ourselves to bring them new obstacles to confront,” the helmer added.

“I really enjoy reconnecting with the cast on each film, and working on the fight scenes with them. It took them months to learn the choreography, and then on the day that we filmed, they made sure that every beat was connected,” Lin continued.

“I had a great time on set working with Michelle, Jordana, Vin and the rest of the cast, especially on the stunts. I think part of that is because I’ve been away from the series for the past two films, and we were happy to reconnect and form that intimacy together again, which is something I enjoy a lot,” the director added.

Following up on the fact that he stepped away from the series for ‘Furious 7’ and ‘The Fate of the Furious’ before he returned for ‘F9,’ Lin noted that he now has a greater appreciation for the time he spends working on the franchise. “I have a greater appreciation for the series now, after being away. As a filmmaker working in Hollywood, it can easily be a lonely place. But the fact that we all came up together, and through this shared experience, grew together, is very rare,” he pointed out.

“So when I was able to come back and work with everybody again, it felt seamless, as there was a level of trust, and we were able to take that in. I think you’re able to feel that when you take in the films,” the filmmaker added.

Lin then further delved into how he has evolved as a director during his time working on ‘The Fast Saga.’ He admitted, “When I started on ‘Tokyo Drift,’ I was very young in my career. So I didn’t know how to approach it in any other way than the way I approached my early indie movies,” which include the 1997 drama, ‘Shopping for Fangs,’ and the 2002 crime drama, ‘Better Luck Tomorrow,’ in which Kang played Han for the first time. “That kind of affected our process.

“So while I was away, I felt like trying different mediums, which have different pacing. I think when you go into TV, you’re working at a rate that’s much faster than movies,” said the filmmaker, who helmed episodes for such shows as ‘Magnum P.I.,’ ‘S.W.A.T.’ and ‘True Detective’ during his hiatus from ‘The Fast Saga.’ “So coming back to this series reminded me that it doesn’t matter if it’s a big-budget movie; I think it’s always about making sure that we have momentum in whatever we’re doing. Even if we’re filming the biggest stunts that are going to take days to shoot, but will only appear on screen for a couple of seconds, it’s important to make sure that the energy is always being created and maintained.”

Besides the the #JusticeForHan movement, Lin noted that he was mainly drawn back to working on the franchise because of the ever-changing family dynamics between the main characters. “The idea of further exploring the theme of family, but through blood, was very exciting to me. I felt like this movie was an opportunity to really explore the origin of this whole mythology,” he shared.

“To do that on a part 9 means that we’ve never done that before. So to have something fresh to explore made it feel worth it to me to come back,” the filmmaker added.

Further discussing the importance of family in the series, Lin then shared what qualities he admires the most about Diesel as both an actor and creative collaborator. “I love the fact that we have a relationship where we can both be inspired, and although we can’t always fully articulate that inspiration, we can just share it,” he noted.

“There were times on ‘F9’ where we were working on a beat. We then both realized that that beat started nine years ago while we were shooting in Mexico, and then it somehow found its way into this film,” the director continued. “So to be able to have that process through the years, and have that level of care, is something I appreciate about Vin.”

Lin also shared that he’s “always been fascinated with Dom’s backstory. So again, to be able to explore that in ‘F9,’ is something that I take a lot of pride in. It meant a lot to me that we were able to do it in this chapter.”

Continuing to keep the late Paul Walker’s character of Brian O’Conner alive off screen was also something that the filmmaker feels is important to the series. “Obviously, I was very close with Paul. He, and his character of Brian O’Conner, are such big parts of this franchise. So the decision to keep Brian alive is something I definitely take to heart, and is something I think and talk about every day when we work on these films. So to keep the character alive in a respectful way is a continuous conversation for me and everyone else,” he concluded. 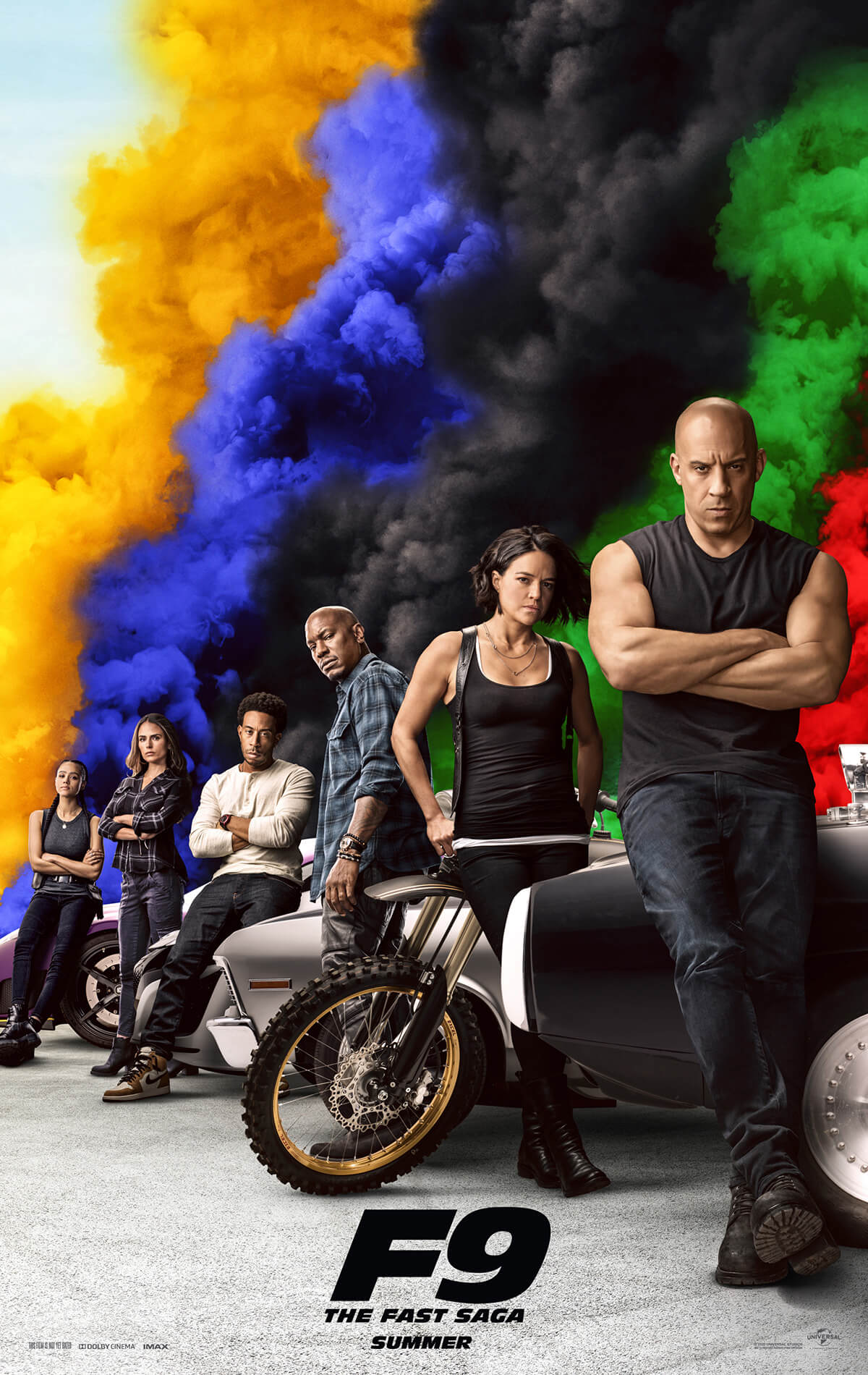