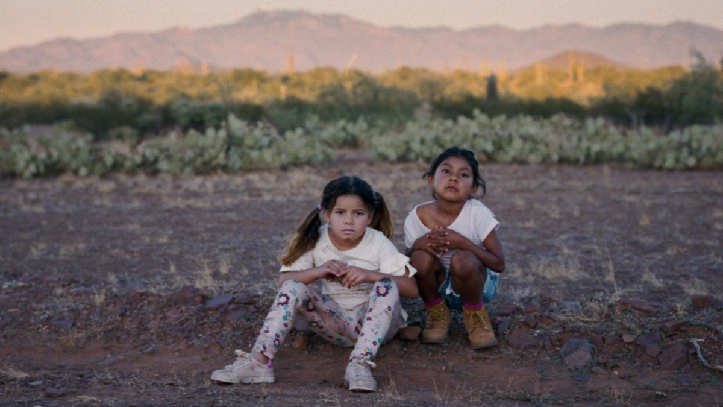 One of the most vital ways people can survive in the ever-changing world is by finding true connections, even with people who aren’t part of their societies. That’s certainly the case for the two young protagonists in the new short film, ‘Burros.’ The drama shows that even though the daily lives and centuries-old traditions of a community’s residents may become disrupted by the presence of outside forces, the main characters, who come from contrasting cultures, were still able to overcome their differences and truly connect.

Jefferson Stein wrote, directed and produced the movie, which is in English, Spanish and Tohono O’odham, with English subtitles. The short, which stars Amaya Juan and Zuemmy Carrillo as the protagonists, had its World Premiere at this year’s Tribeca Film Festival in the 2020 Official Selection: Shorts section.

‘Burros’ is set in southern Arizona, twenty miles from the Mexican border on the Tohono O’odham Nation. It follows a six-year-old Indigenous girl who discovers a Hispanic migrant who’s the same age as she is, and has lost her father while traveling through the Tohono O’odham tribal lands into the United States.

Stein generously took the time during the Tribeca Film Festival last month to talk about writing, directing and producing ‘Burros’ during an exclusive interview over the phone. Among other things, the filmmaker discussed that he was grateful the Tohono O’odham nation was so willing to accommodate him making the drama on their land, and showcase their way of life. He also mentioned that he was honored to premiere ‘Burros’ at the Tribeca Film Festival, and be able to share the movie with audiences in person.

The conversation began with Stein explaining what inspired him to pen the screenplay for ‘Burros.’ “The story for the film came about a few years before we filmed it. I spent many years researching the border issues before I wrote the story,” he revealed. “I didn’t think I could make it, but while talking to my partner at the time, she pushed me to at least give it a try, and I did.

“I was amazed at how kind and welcoming everyone was in the Tohono O’odham nation; they were incredible. We pitched the idea for the film to the elder community council on a Saturday morning at 8am, after driving down to the nation many times from L.A. with my producer. After an hour-long meeting, they past a law to approve the film,” the scribe shared.

“It was important to me that we made it together, so we decided that we weren’t going to bring actors in. I also decided to live right near the nation for a month, so that we could make it together. The story did change a little bit during that process,” Stein revealed. “All of the people I met while I was down there really influenced and inspired the story in a lot of ways. I think that’s where a lot of the realism comes from.

“The film is this sweet story about two kids who don’t speak a connecting language. But you still see a lot of real stuff between them. A lot of that stuff I experienced while I was down there, or was told stories about from other people who experienced it in their lives down there,” the writer added.

Besides penning the script, Stein also cherished directed the short, and shared what his experience was like of going from working on creating the story into helming ‘Burros.’ “It was strange because I sat with the story for a long time, and was able to rewrite it as often as I needed. But at a certain point, it had to be shot,” he pointed out.

“The thing that connects the three parts for me is the emotion. If the emotion changes a scene, then that needs to be consistent throughout the whole film, so that we feel something,” the filmmmaker shared. “If I was working on a scene in ‘Burros’ and it wasn’t really working at first, as long as there was an emotional throughline that I was connecting, then it was worth it.

“When I’m on set, I don’t look at the monitor. Once I set up my shot, I sit next to the actors, and get up really close to them, almost like a play, and watch them,” Stein continued. “If I don’t feel something while I’m watching them, then something needs to change.

“For me, it’s all about translating the emotion of what the scene needs to be. As long as each scene has an emotion, then the film’s going to be okay,” the director added.

The casting process for ‘Burros’ was another major element of the film’s production. Stein revealed that finding the right actors to star in the drama was a challenging one. “To find the right actress to play the character of Ena, who loses her dad, Liz Cardenas, my producer, and I emailed elementary schools in Tucson. We visited them during lunchtime and asked the students, ‘Who likes theater and acting?

“What I liked about Zuemmy Carrillo, who we cast as Ena, was the depth of her emotions in her face; she just really got it. She barely speaks in the film, as she’s really traumatized, hungry and tired, as well as shocked and scared. So much of what she’s feeling just really comes through on her face, and she did an amazing job with that,” Stein gushed.

“With Elsa, we cast Amaya Juan from one of the TOGO (Tohono O’odham Gaming Office) teams. Her aunt was a coach for TOGO, and when she went to practice one night on the same field that we shot a scene at,” the helmer noted. “I said, ‘Amaya, it’s nice to meet you. This is the scene,’ and we ran it with her. Amaya just started crying, right here in front of her aunt and teammates. It was a powerful moment, and amazing that we found her-she’s so good in the movie,” the filmmmaker gushed about the actress.

Once the actors were cast, Stein enjoyed the process of working with them to rehearse and build the characters. “I work with a lot of non-actors in my films, and what’s really important to me is performances. To get that from a non-actor, most of the time, is to have them play themselves. That’s kind of what we did with this short,” he revealed.

“Amaya is so much the character of Elsa. She’s so rambunctious, tells jokes and says whatever she thinks,” the director shared. “Rupert Lopez, who plays Joe, the father, is a cop for the nation in real life, and he plays a ranger in the movie.

“Since they all pretty much were playing themselves, acting came pretty naturally to all of them. None of them had taken an acting class, and I wasn’t teaching any acting classes on set, so it was really special to see their performances come through,” Stein added.

In addition to scribing and helming ‘Burros,’ Stein also cherished being able to also serve as one of the movie’s producers. He delved into why he decided to also produce the short, and how did he balanced directing and producing the film during the production.

“I had an amazing producing team. During the filming of the short, producing took a backseat for me, and the team really helped with that,” the producer shared.

“Liz Cardenas, the a producer I mentioned earlier, used to be a reporter for the Dallas Morning News. So one of the reasons why I wanted to bring her on board was that she’s a journalist. Also, her father’s from Mexico, and authenticity is so important to this film. So finding the right people in this authentic way was so important, and she did an excellent job on this film,” Stein added.

“We also brought another production company on board, Artless Media, who helped us. We actually produced half of the short remotely from San Diego, so we were casting extras and finding locations, with some of our production team members who weren’t even in Arizona,” the filmmmaker divulged. “It was so incredible to see that synergy happen.

“So I was able to work with Liz on the location, which allowed me to focus more on the directing aspect during the shoot. Filming in the desert with kids can be difficult, so I’m lucky that I had a good type behind me,” Stein added.

After production on ‘Burros’ was completed, the helmer appreciated having the opportunity to premiere the drama at the Tribeca Film Festival. “It’s such an honor. I love meeting people, and (had) such an incredible experience meeting so many other filmmmakers,” Stein gushed. “We’re so fortunate that the festival (had) in-person events; the venues (were) incredible. There (were) huge screens and massive speakers, and it (was) so special to see the movie in a unique setting. It (was) amazing to be a part of the rebirth of cinema in New York City,” he concluded.