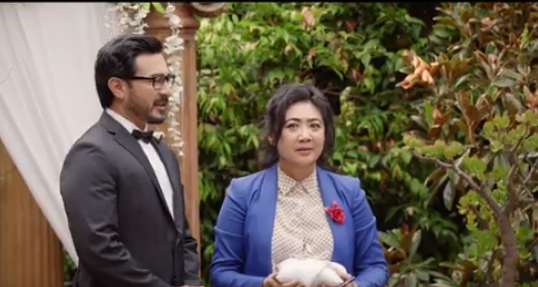 Career assignments and romance are unexpectedly colliding for two workers entrenched in the business of celebrating their clients’ love in the new romantic comedy, ‘Rhapsody of Love.’ Actress Kathy Luu and actor Damien Sato’s characters in the film are trying to fight the unexpected sparks that are growing between them – and threatening their jobs and personal lives.

‘Rhapsody of Love’ follows an events planner, Jess (Luu), and a wedding photographer, Justin (Damien Sato), who can’t deny the sparks between them. However, there’s one small hitch – his girlfriend.

Quiver Distribution is releasing ‘Rhapsody of Love’ digitally today, October 22. In honor of the movie’s distribution, ShockYa is premiering an exclusive clip from the feature.

In the clip, Jess and Justin are at the wedding of two of their clients, making sure that the ceremony begins smoothly. After Jess hurriedly arrives at the wedding venue, the groom admits to her that he’s having an anxiety attack. As a result, she must remind him of his love for his bride, in order to calm his nerves.

Joy Hopwood wrote, directed, produced and stars in ‘Rhapsody of Love.’ In addition to the filmmaker, Luu and Sato, the comedy also stars Lily Stewart, Khan Chittenden and Benjamin Hanly.