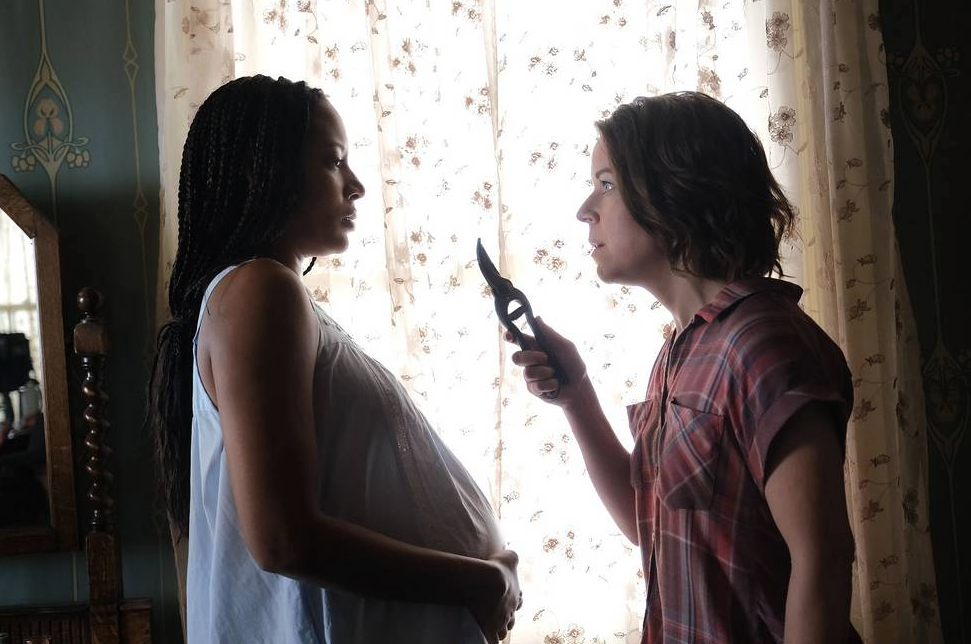 People often form a pre-conceived notion of how the relationships they form, and the situations they find themselves in, will play out, without having any experience or knowledge to justify their expectations. That’s certainly the case for both the main characters in the new horror thriller, ‘Into the Dark: Delivered,’ which stars Tina Majorino and Natalie Paul. Both women have firm beliefs about how pregnancy and motherhood should, and will, be, but it isn’t until they form a truly personal relationship that they both realize how reality may not always live up to their expectations.

Producer Jason Blum‘s independent television studio, Blumhouse Television, crafted ‘Into The Dark,’ which is a monthly horror event series that’s inspired by different holidays. The feature-length installments include Blumhouse‘s signature genre-thriller spin in its stories. ‘Delivered’ is the latest entry in the anthology series, and serves as ‘Into the Dark‘s Mother’s Day episode.It was written by Dirk Blackman, and directed by Emma Tammi. The movie premiered on Hulu this weekend, in honor of today’s celebration of Mother’s Day.

‘Delivered’ showcases how first-time expectant mother Valerie (Paul) is still having trouble fully accepting her pregnancy and impending motherhood, despite the fact that she’s nearing her due date. Her doting husband, Tom (Michael Cassidy), however, is excited about their upcoming parenthood, and is fully engaged in his wife’s pregnancy.

Valerie’s outlook on becoming a parent improves slightly, however, when she and Tom meet another mom-to-be, Jenny (Majorino), at their yoga class, which is tailored to expectant mothers. While Valerie is still a bit unsure about how she’ll fare as a mother, her new friendship with Jenny is helping her perspective on parenthood improve…until an unexpected turn in events makes her question the other woman’s true intentions and plans.

Majorino generously took the time recently to talk about staring in ‘Delivered’ during an exclusive interview over the phone. Among other things, the actress discussed that she was drawn to play the role of Jenny in part because she was initially intimidated at the thought of portraying the antagonist in the film, as she has never played a villain in her career before. The performer also noted that it was important to have a strong female director like Tammi, and two powerful woman as the leads, in such a female-centric story, in order to showcase how important woman are in filmmaking, especially in genre features.

The conversation began with Majorino explaining what drew her to play the character of Jenny in ‘Delivered.’ “This script came across my desk, and it was one of the best ones I’ve read in a long time. It really grabbed me from the first page. As an actress, this was something that I have never done before; I have never played the villain,” the actress noted.

“I wanted to do this movie so badly, because of how intimidated I was at the prospect of taking on the character of Jenny,” Majorino admitted. “So I really went after it, and sent in a tape. I tried to prove that while no one has really seen me in this light before, I was still capable of doing it.

“The things that made me want to play Jenny were all of the things that make her frightening,” the performer also disclosed. “I knew in my gut how hard it would be to find that in myself.

“I’m definitely someone who wants to be challenged; I don’t just want to take on things that are easy. I want to grow as an actress and a person. I also want to continue to elevate myself,” Majorino further revealed.

“I also want to continue to work with incredible people who can help me become a better actress and person. Everyone who was involved on this project fit that criteria,” the actress shared. “They were incredible filmmakers, and so highly educated in this field. So it was an incredible experience to take on an immense challenge, and to feel fully supported. To have those people stand behind me when I was doing something new was life-changing.”

While Jenny is initially presented as a relatable woman who’s preparing for the birth of her child, she also holds a darker secret that’s eventually revealed that changes the trajectory of her life. Majorino then followed up on what the process of connecting with her character’s struggles, and making her an at-times sympathetic villain who’s struggling in her life, was like.

“It’s not really possible to fully embody a character like Jenny if you’re judging them. So it was pretty important for me to come from a place of compassion, and unpack why she is the way she is, instead of just trying to make her scary,” the performer explained. “The point of this story was to embody someone who’s incredibly troubled from horrific trauma in her life, and never got any help. She’s by herself, and things just devolved. So I really tried to be as compassionate as possible towards her, so that I could find my way in” to her emotions and motivations.

“So it was pretty difficult for me to play that villainous side of Jenny, as I’m a pretty joyful person!,” Majorino admitted with a laugh. “I love to laugh, be silly and have fun, but everyone does have their more serious side. In general, I’m in a much different place than the character was, so it took a lot of effort to put myself in that headspace. While it was challenging, at the same time, it was also really fun. I felt completely safe to mess up. That’s the perfect atmosphere for good work to be made.”

The actress added, “I really have to give props to our amazing cast and crew, including our amazing director, Emma, for creating that atmosphere. Even though I was really intimidated and scared to take this on, I felt incredibly supported, and we laughed all the time! It was an interesting, amazing and incredibly fulfilling experience.”

Further speaking of how ‘Delivered’ was directed by Tammi, Majorino cherished her experience collaborating with the filmmaker on developing Jenny’s arc throughout the thriller. “Emma is an incredible person and director. It was a really amazing experience to have her at the helm of this, because it’s such a female-centric story. She has such a unique perspective on life and filmmaking that I just trusted her explicitly,” the performer stated. “She creates that safe environment, and knows her stuff. If I was nervous about something, she created an atmosphere where I could always go to her, and be honest about it. I’d work with her over and over again.”

With the drama also starring Paul as the other female lead, Majorino also enjoyed the process of working with her co-star to build their characters’ relationship. “The cast was super-fun, and they’re great people. Most of my scenes were with Natalie, and we really connected during our first reading at the table read. She’s such an amazing woman, I knew that we were going to have a great time,” the actress gushed.

“As actresses, you can sit down with Natalie and say, ‘This is what I need, in order to play this character. Is that okay?’ She’d say, ‘Yes, this is what I need.’ We sat down and had a lot of conversations. I didn’t want her to have any pressure to be nice to me if she didn’t feel like that was part of her process, and vice versa,” Majorino divulged. “Just being able to work with an actress who’s that committed and open in communication really eased my mind a lot. Everyday going to set, I knew I was working with someone who respected the process, which was amazing.”

Having a mother-and-driven story that featured so many women on the cast and crew was something the performer cherished about the movie. “I think it’s cool that so many women were working on this genre film. I hope that we get to a place in our culture where we don’t have to have so many conversations about how many women are working on a project,” she asserted.

“But I definitely think having so many women on the cast and crew was an important piece to making this film. We had so many strong, smart women on set. Since we were telling a story with two female leads, it was important to have a female director,” the actress added. “I feel like there were conversations that had to be had about being a woman, and the pressure we have to be a mom. I feel like having so many women on set helped us talk about those topics, and not be uncomfortable about them. The women on set were so supportive, and that made all the difference in the world to me.”

“But it was a tough shoot, because we had a lot of bad weather, and it was a small, confined space. But the crew worked hard to make the film, and that helped create an intimate atmosphere, which was really nice. I liked the consistency of it, and the intensity of the story we were trying to tell,” the performer continued. She added with a laugh, “The intensity was high, because we were all trapped together in the house!”

As the conflict arise throughout ‘Delivered,’ there are physical struggles between Jenny and the other characters, especially Valerie. Majorino also enjoyed the process of creating the stuntwork and physicality for her role of the drama’s antagonist. “I got to do a lot of stunts, which is my favorite thing to do on set. It was a dream come true to actually have to learn some choreography with Natalie for some of our scenes,” she revealed. “It definitely added another layer to my performance when I was not only trying to stay in the moment emotionally, but also thinking about fighting someone physically. It was very challenging, but also very fun, and Natalie and I had a ball in those scenes together; it was great!”