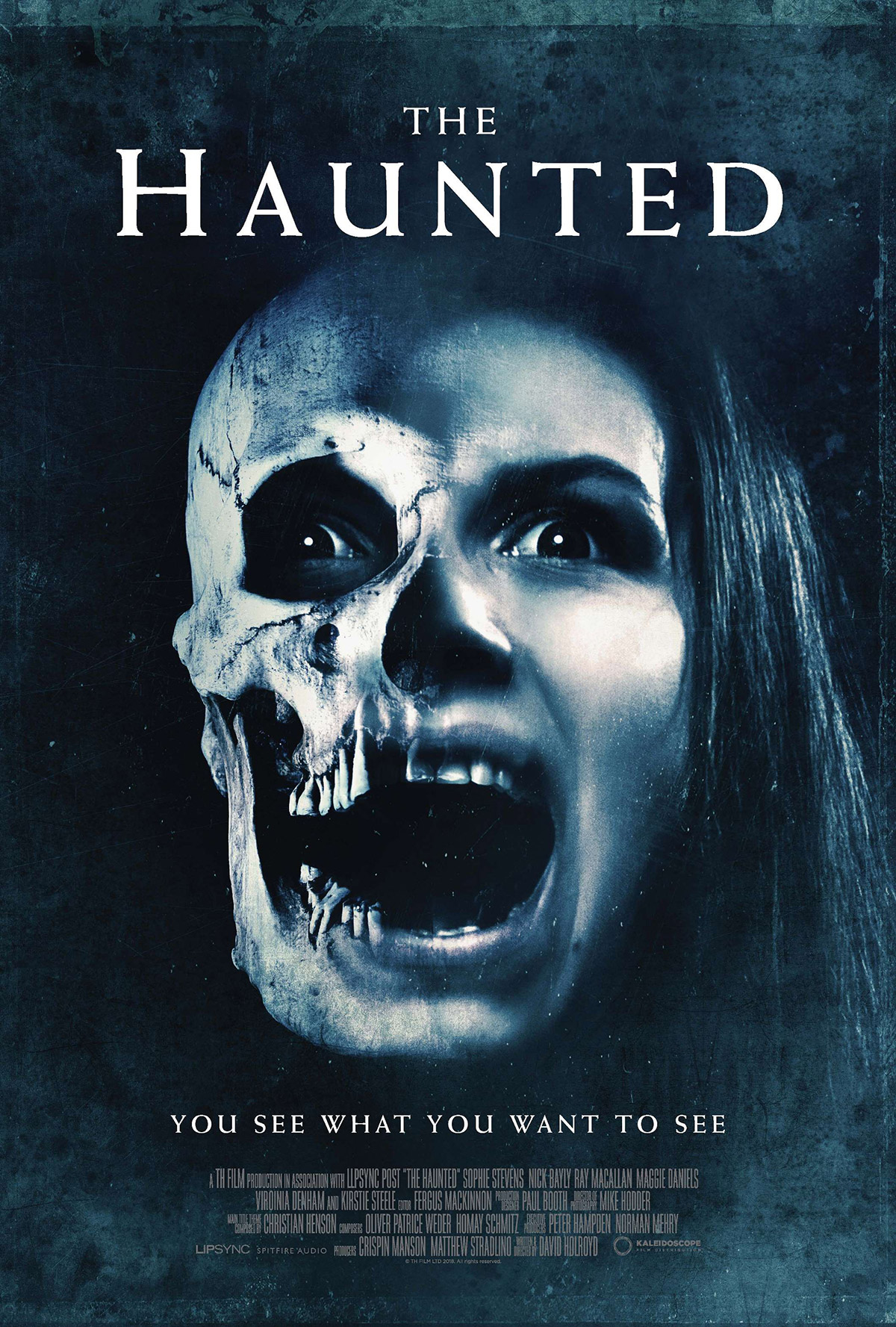 The poster for writer-director David Holroyd’s horror-mystery-thriller, ‘The Haunted,’ which stars Sophie Stevens.

People can often become plagued by past harrowing experiences, even if they weren’t directly involved in the terrifying events. That happens to force the victims to contend with the frightening aspects of the human condition as they begrudingly come to light. That process is powerfully showcased in the new horror film, ‘The Haunted.’ The mystery thriller explores how an innocent young caregiver must learn to grapple with the fear that the home her new elderly patient is living in is bringing to everyone who enters it, even her.

David Holroyd wrote and directed ‘The Haunted.’ Vertical Entertainment is releasing the drama today on VOD.

‘The Haunted’ follows young caregiver, Emily (Sophie Stevens), as she arrives at an isolated house for her first nightshift. She’s set to begin her new career as an overnight caregiver for the elderly, delusional Arthur (Nick Bayly). Once she begins her new job, her work mostly requires her to guide her new patient back to bed, and reassuring him that he’s not really seeing things that she cannot. Otherwise alone, Emily spends most of her time on duty exploring Arthur’s estate.

While the nurse initially claims there’s nothing in the house with her and her new patient, she’s surprised to find an Ouija board and other paranormal paraphernalia. She’s then forced to face a terrifying, vengeful spirit (Kirstie Steele), who appears at random times and gives Emily continuous scares. The nurse is forced to fight to not only prtect her life, but also her sanity.

Holroyd generously took the time recently to talk about penning and helming ‘The Haunted’ during an exclusive interview over the phone. Among other things, the filmmaker discussed that he decided to scribe a ghost story that’s set in one house and features a small cast, in an effort to make the project quickly and easily in the UK. The director also mentioned that he cast Stevens in part because he felt that she could convey all of the emotions that were required for the story’s protagonist.

The conversation with Holroyd began with him explaining what inspired him to write the script for ‘The Haunted.’ “The producers and I had been developing a couple of supernatural thriller ideas for a couple of years. In the UK, it’s incredibly difficult to get an independent feature film made,” he revealed. “You either have to go after a really high budget film with a big name actor, or a really low budget film in a genre.

“So we had been developing something that was a mid-range budget for a couple of years. As always with those types of films, we were trying to get a big name attached. They rely on the money, and the money relies on a big name,” the scribe further explained.

“So one day I became frustrated, and said, ‘Why don’t we just shoot a ghost story in one house? We’ll get a camera and a crew for a couple of days, and just shoot a quick ghost story that will scare people?’ The producers said, ‘Yes, we think we can do that on a small budget,'” Holroyd added.

“So then I had to come up with the script. I started with the location first, because the location where we shot was actually one of the producers’ parents’ house, which is amazing,” the filmmaker divulged with a laugh. “I thought, great, we have a house that we can use, so let’s build a script around that.

“Knowing that we would have a very short shooting schedule and a very small number of actors, I knew I had to work out a great story. I found a good actress with Sophie, and knew she would be playing the caregiver, who was looking after someone overnight, and starts having scary things happen to her,” Holroyd noted. “That was the initial premise, and then the whole story popped into my head.

“I find with scriptwriting, especially if it’s a genre piece, you’re going to take people on a scarefest. Even if it’s a short story, you have to have a story with an emotional premise to it. It started from there, and then went through several iterations, before we came up with the final story,” the writer further shared.

Once Stevens, who Holroyd felt could convey all of the emotions that were required for the protagonist, signed on to portray Emily, “we spent about three or four days rehearsing in the house. When you’re making a low-budget feature, you have to use every single trick you can to make the production values look very high, and you have a very limited amount of time to do that,” the filmmaker explained. “Since we were in the real location while rehearsing, that helped Sophie. Rehearsing in the real location allowed us to explore the character’s emotions in the setting where we were going to shoot, and she would therefore have to imagine things less while we were filming.

“The most difficult thing for Sophie was to convey all of these strong emotions throughout the entire shoot, especially since she’s in almost every single scene,” Holroyd further revealed. “That was difficult for her, so anything that we could do to make things easier for her, we did.”

The director also felt that one of the great things about the house where ‘The Haunted’ was shot was “that we already had a whole haunted house scenario set up for Emily to explore. Pretty much all of the furnishings were pretty much there already, and I think that helped Sophie’s performance.”

To capture the scares that the character of Emily experienced in the estate as she started her new job, Holroyd worked with cinematographer Mike Hodder on ‘The Haunted.’ The helmer cherished the process of working with the director of photography to develop the look of the horror-mystery-thriller.

“We knew we had limited time to make the movie, so many of the crew members are people I’ve worked with before over the years,” the filmmaker shared. “They all gave us a few days to work on the film, so I knew that we had to leave as little to chance as possible.”

Since the estate where ‘The Haunted’ was shot “is an old family house, and the kids grew up and left the property years ago, it was already perfect. It had a sense of a family being in there, and suggested that many lives had gone through it and left…You could tell people have lived there, and yet, it was also vastly empty,” the director divulged. “So the look we wanted to shoot was already there.”

So Holroyd and Hodder decided “that the best way to film would be to shoot with as much available practical light as possible, so that we could shoot quickly.” The helmer added that “our original plan was to shoot the movie through two angles; one on Sophie, in order to get her reaction, and her point-of-view, which would be a quick and effective way to get through the film.

“But very little of our rehearsal time with with the cameras. So once we began filming, it became clear very quickly that because of lighting issues and shadows, we couldn’t make the movie on just those two angles,” Holroyd revealed. “So we had to do pick-ups throughout the day, and that made us realize that we didn’t have to be constrained by just those two angles.” He added that “We shot the film in the wintertime, when it gets dark around 4pm in the UK, so we were able to shoot mainly at night,” which is when most of the story is set.

In addition to the visuals, the score is just as important in creating the scares for the horror, mystery and thriller genres. The filmmaker then explained what the process of creating the music for the feature with the drama’s composers, Homay Schmitz and Oliver Patrice Weder, was like.

“The composers wrote the score, after we went through digital viewings of the film together; I was in Perth, Australia, and they were in the UK. We did video conferencing on Skype, and then they broke the movie down into the number of tracks we should have,” Holroyd explained. “They then wrote the score for each scene, and then sent those scenes with the score in them. I watched them and made suggestions, if I had any.

“I wanted to the score to be unsettling, and have unconventional music. So they used unusual strings and percussion, to give the score an extra feel. I wanted the music to feel as though it had very high production value,” the director added.

“With ghost stories, the story, performances and music all have to be good. They’re all vital elements to the atmosphere…The music was a very important element in creating the mood,” Holroyd added.

With Vertical Entertainment distributing ‘The Haunted’ today On Demand, the filmmaker feels the digital distribution is beneficial for an independent film like this one. “As long as the film is getting to the audience and scaring them, I don’t mind how they see it…The biggest advantage of the theatrical experience has always been its ability to totally immerse you in the experience – a big screen in a darkened room that cuts out any other distractions,” he pointed out.

“These days, most people have a comparable set-up in their own homes: 4K, 50 inch TVs and surround sound that equals what you get in a theater,” Holroyd further noted. “Since the beginning of VCRs, we have been moving faster and faster to a world where theatrical and home viewing are practically the same, and those days are now truly here.” He added, “A ghost story like ours is often more frightening in your own home; how freaked out are you when the film stops and you’re in a dark room.”

“But I do still love going to the movie theater. ‘The Haunted’ was actually scheduled to have a theatrical release, but Covid-19 put an end to that. But for an independent feature film, VOD actually has many advantages,” the helmer divulged.

“You have to think of the audience…Will they be willing to go to a theater right now to see an independent movie with an actor they don’t recognize by a director they don’t know? That’s a big risk for them,” Holroyd also noted. “If a viewer can stay at home, they are far more likely to take a gamble on a new genre movie, especially when they can watch the trailer immediately before they watch movie to help them make their choice.”

Studios are “increasingly beginning to realize maybe they aren’t actually dependent on movie theatres, since everyone has a theatre in their own home…Nothing will ever be the same again. For the independent film maker, it’s a time of great opportunity, and we should grab it with both hands,” the filmmaker concluded.