Being confronted with the serious question of whether to follow the moral or legal path is a truly powerful and equally troubling situation. It’s even more disconcerting when the circumstance presents itself to a young teen. That’s certainly the case for the eponymous 13-year-old character in the new action-thriller, ‘Becky.’

The title character channels her teen angst to fight back and exact her brutal revenge against the escaped prisoners who are targeting her and her family, often times without regard to the ethical repercussions and ambiguity that accompanies her decisions. Becky’s strong will allows her to fight back against her pursuers’ horrifying and depraved actions, while also matching their unhinged intensity and physicality.

Lulu Wilson, who has made a name for himself in the horror genre, having starred in such films as ‘Ouija: Origin of Evil’ and ‘Annabelle: Creation,’ as well as the Netflix television show, ‘The Haunting of Hill House,’ powerfully portrayed Becky in the new drama. Her experience, instincts and professionalism helped create complex emotional scenes, which are realistically and emotionally grounded.

‘Becky’ was written by Nick Morris, Ruckus Skye and Lane Skye, and directed by ‘Cooties‘ and ‘Bushwick’ co-helmers, Cary Murnion and Jonathan Milott. Quiver Distribution and Redbox Entertainment are releasing ‘Becky’ today in Drive-In theaters, On Digital and On Demand, after it was selected to play at this spring’s Tribeca Film Festival.

‘Becky’ follows the titular teen as she’s still coping with the death of her mother the year before. In an effort to strengthen their relationship, her father, Jeff (Joel McHale), brings her to their lakeside vacation house for the weekend. Their bond seems to brighten a bit when he tells her that he has decided not to sell the home, which they often visited with her mother. However, Becky’s improved change in attitude quickly recedes when Jeff informs her that he has also invited his new girlfriend, Kayla (Amanda Brugel), and her young son, Ty (Isaiah Rockcliffe), to stay with them during their visit. The teen girl finds Kayla’s very existence to be disrespectful to her later mother’s memory.

The tension grows even more following the group’s first uncomfortable dinner together, as Becky storms off to her old playhouse in the surrounding woods after her father and new girlfriend make an announcement that upsets the teen. But Becky’s angst over her family’s new dynamic is trumped when Dominick (Kevin James), the ringleader of a convict quartet who’ve recently escaped during transport, arrive at the house.

The criminals demand a mysterious key that had been secretly hidden in the basement, but it is no longer there. When Dominick realizes that the still-missing Becky most likely has the key, he threatens to unleash grievous harm upon his three captives-Jeff, Kayla and Ty-to encourage her return. But once she begins to understand the life-or-death situation, Becky proves that’s she’s more than capable of unleashing equal punishment on her family’s captors.

Wilson generously took the time recently to talk about starring in ‘Becky’ during an exclusive phone interview. Among other things, the actress discussed that she was drawn to play Becky in part because she was the first character she portrayed that willingly faced the danger she finds herself in directly, instead of running away from it. She also shared that she appreciated that Milott and Murnion gave her the opportunity to add her full input into the creation of her portrayal of Becky.

The conversation began with Wilson explaining how she became involved in ‘Becky.’ “The producers gave me the script when I was 11. It was the first script I had read for myself that the character I would be playing would be facing the danger head-on, instead of running away from it. That really interested me,” she revealed.

“The years then went on, and we still hadn’t done anything,” the now 14-year-old performer added with a laugh. “Then at the beginning of the summer last year, we heard that it was probably going to happen by the end of the summer. I was then in Toronto before I knew it, and now the movie’s coming out, which is incredibly exciting. I can’t wait for people to see it!”

Wilson then revealed that she was able to relate to Becky’s emotions and motivations throughout the filming of the thriller. “She’s really one of my favorite characters that I’ve ever played. She’s really strong and empowered, and I do relate to her overall. I put a lot of my own teen angst into the character, which was really necessary,” she shared. “But I also tried to make her as likeable as possible, so that people could actually root for her.”

Following up on the fact that ‘Becky’ was shot on location in Toronto, the actress explained what the experience of filming in Canada was like. “We were in the woods a lot, which was really fun in the beginning. But after awhile, I got a lot of mosquito bites, which wasn’t that enjoyable!,” she admitted with a laugh.

“But it was an interesting experience, especially because the cabin we shot in was really scary. I really liked Toronto, and we were also on the outskirts of the city, in the woods. Since I grew up in New York City and Los Angeles, the area where we shot was different than where I usually am, so that was really fun,” Wilson further noted.

The experience of performing her own stunts was also something the performer enjoyed doing while filming the drama. “I ended up doing most of my own stunts. We also had an amazing stunt coordinator, Angelica (Lisk-Hann). She was really able to collaborate with me, and knew that I wanted to do a lot of Becky’s physical actions. So she helped me do that in the safest way possible.

“Some of my best days were when I was just running around, jumping off of my fort and ziplining; that was actually my favorite day!,” Wilson admitted with a laugh. “I’m not usually a fan of heights, but that day was amazing.”

Working with Milott and Murnion was also something that the actress cherished on the set. “It was my first time working with a team of directors. That was interesting, because they each had their own role. Jon was usually next to me on set, directing me directly,” she noted with a laugh. “Cary was usually next to the monitor, and reported to Jon about what he was seeing. So it was really interesting to watch them work. I also loved how much they collaborated with me, and let me put a lot of myself into the role.

“The drawings in the credits are actually mine, as well as some of Jon’s son’s artwork. It was really cool that he let me do that,” Wilson continued. “We all collaborated really well together. Both Jon and Cary really treated me like an adult, which I really respected and appreciated.”

The performer then added that she also really valued the opportunity that the co-directors gave her to add her full input into the creation of her portrayal of Becky. “We had a few meetings before we started filming, just to talk about the scenes. One of the first meetings we had was between Kevin, Jon, Cary and I, and we talked about the fire scene, and what that would look like. That’s an intricate scene, but it was incredible to film. It was also difficult, though, because it’s set at night, and **SPOILER ALERT** someone’s set on fire **END SPOILER ALERT**,” she revealed. “Jon and Cary had respect for the actors’ opinions, which helped us pull off what we wanted to pull off.”

Besides collaborating with Milott and Murnion, Wilson also cherished the time she had to work with her co-stars, including James and McHale. “It was a really amazing experience to work with the rest of the cast. Kevin and Joel always helped keep the mood really light, and so did Amanda. She did a great job, and we worked really well together, even though we didn’t have many scenes together.” She added, “It was really interesting to watch Kevin, who’s typically a comedy actor, take on this role, and transform into this horrifying, psychotic character on screen, while he’s the nicest guy off screen.”

With ‘Becky’ opening digitally and in Drive-In theaters today, the actress shared that she’s thrilled that audiences will finally get to see the movie. “I’m so excited that not only I get to see it again, but also that audiences will be able to see it. Even though most people won’t get to have the experience of seeing it in an actual theater, unless they can see it in a Drive-In theater, and living the story together, I hope they will still enjoy it in their living rooms,” she concluded. 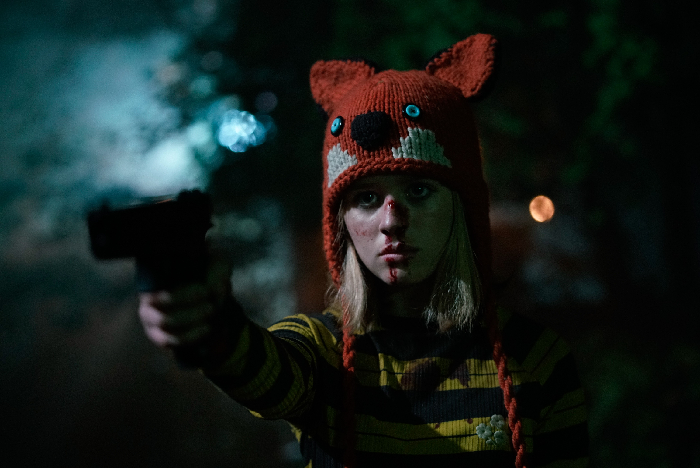