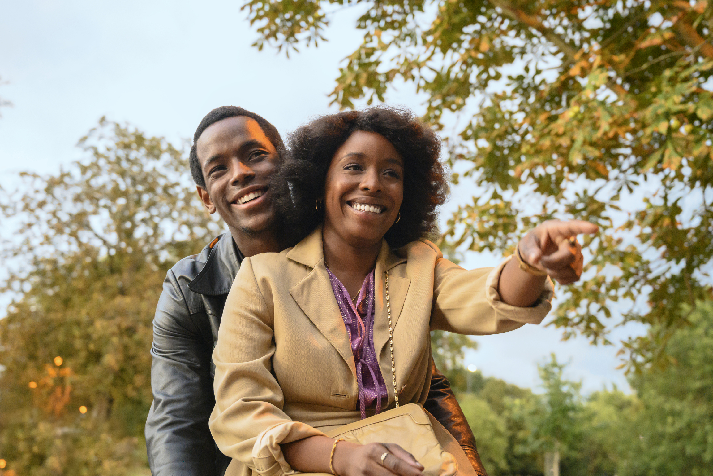 Gaining the freedom to openly express their true love is a powerful journey for young adults, no matter what time period or country they live in, or how much liberty they have in other areas of their lives. That’s certainly true for the characters of the new drama, ‘Lovers Rock,’ which is an ode to the eponymous romantic reggae genre that served as the backdrop to the Black youth who found freedom and young love at parties in London in the early 1980s.

The movie is the second of five installments of Steve McQueen’s new anthology series, ‘Small Axe.’ The five original features are set from the late 1960s to the mid 1980s, and tell personal stories of Black youth from London’s West Indian community, whose lives have been shaped by their own force of will, despite rampant racism and discrimination.

The Academy Award-winning McQueen co-wrote, directed and executive produced ‘Lovers Rock,’ which is the only installment in the anthology series that’s not based on a true story. The feature stars Amarah-Jae St. Aubyn in her screen debut, opposite the BAFTAs 2020 Rising Star award recipient, Micheal Ward, as Martha and Franklyn, who are two magnetically drawn strangers.

‘Lovers Rock’ is framed by self-possessed teenager Martha as she sneaks out of her family home in Ealing to go out partying with her friend Patty (Shaniqua Okwok) in Notting Hill. While Patty immediately feels the vibe of the London house party, which is driven by the title reggae music, is too aggressive, Martha wants to stay after she meets Franklyn, as she’s intrigued by his personality.

McQueen, St. Aubyn and Ward generously took time to talk about penning, helming, producing and starring in ‘Lovers Rock’ on the day of the drama’s premiere at NYFF during a virtual press conference, which was moderated by the festival’s Director of Programming, Dennis Lim. Among other things, the filmmaker, actress and actor discussed the process of shooting the dance sequences, making the musical choices that supported those dance scenes and dedicating ‘Small Axe’ to George Floyd.

One of the main topics that McQueen discussed during the press conference was the fact that ‘Lovers Rock’ is the only installment in the anthology series that’s not based on a true story, and how creating a fictional story influenced his research during the writing process. He noted that the movie is “put together from sense memories, and is so rich in its sensory details, including the clothes, the wallpaper, the food and the music…(The film) started with hundreds of interviews. I was passionate to talk to people to record their stories and histories.”

The scribe worked with a researcher to get hundreds of stories on paper “because they haven’t been written in history books…this is a history which was interwoven between the text of history, but wasn’t individualized.” He added that these stories are important for people to know as they set out to understand the modern UK.

St. Aubyn also spoke about her research process when she was cast as Martha. She shared that her most important interview was with her mother, who moved to England from Jamaica when she was nine. So the actress channeled her mother and aunt’s truths about their experiences living in the UK while they were growing up.

Ward also chimed in, and revealed that the most powerful research for him was his costume. “Those shoes, as soon as I slipped them on, I was like, yep, I’m Franklyn,” he revealed.

The trio also spoke about the the characters’ speech habits, including their different dialects, and what the process was like for them to create the way Martha and Franklyn spoke. McQueen divulged that the speech wasn’t something he thought much about during the feature’s production. “It’s very, very London; you go here and talk this way, and then go there and talk another way.” He added that the dialogue is authentic for the characters, and doesn’t mimic the way residents of each London neighborhood speak.

Ward also chimed in on the experience of changing the way he speaks, even in his personal life. He noted that his acting made him realize how often he changes the way he talks to his family who live in Jamaica and his fellow London residents.

St. Aubyn also shared that she heard many different dialects growing up, “so it was just about getting it into my voice and understanding it myself. But I had it with me all the time, and it was always in me.”

McQueen was also asked whether the dialogue or music choices came first while he was penning the script and then directing ‘Lovers Rock.’ He shared that his choices began with moods and stories he heard from his aunt. “She wasn’t allowed to go to these parties, but my uncle would leave the back door open, letting her sneak out on Saturday night before she had to go to church on Sunday morning.”

The filmmaker added that the dialogue was at times downplayed in an effort to convey a certain mood and sensory details, as the most important things he wanted to convey in the drama were moods. While penning the dialogue, his philosophy was to simply “see what happens because I trust film and art. Hopefully, we created an atmosphere that allows things to happen.” He added that the screenplay was more of a reference point for the actors, and he allowed them to discover their characters through improvisation.

In addition to working with McQueen on her character’s dialogue, St. Aubyn also enjoyed working with the movie’s choreographer, who helped her understand the differences between the dances that were popular during the plot’s timeframe 40 years ago and are favored now. She noted that she learned to keep her “energy rooted and heavy in (my) feet.”

McQueen also cherished the experience of working on the choreography for the feature, and noted his appreciation for dance goes back to his own childhood. “I remember being taken to these dances, and I was put into the back room, where I would wake up in the middle of the night, and had coats strewn all over me. I remember how my father and mother danced,” he shared.

The press conference came to a somber end when the filmmaker was asked about dedicating ‘Small Axe’ to Floyd. He noted that COVID-19 had forced society into much-needed reflection. “It’s a good time to reflect on who we are and where we want to…I want to talk about who we can be, rather than who we are,” he concluded.

Watch the full ‘Lovers Rock’ NYFF press conference in the above video, and the official trailer for the ‘Small Axe’ anthology series below.