With today kicking off the New Year, people around the world are celebrating the possibilities of improvement that they hope will come, particularly in terms of the COVID-19 pandemic. As families continue to stay home together under quarantine, they still have some exciting ways to spend their time together, including watching the latest films.

The world can still unite at home with the digital releases of some of winter 2021’s most anticipated titles. While the entertainment awards season has been postponed this year, the upcoming winter months still still promise to be the latest season set to unveil gripping, entertaining and memorable movies.

The winter 2011 film season is set to begin today, as Gravitas Ventures is distributing the documentary, ‘Sing Me a Song,’ via virtual cinemas and on VOD platforms. The movie was directed and produced by award-winning filmmaker, Thomas Balmès.

Gravitas Ventures has unveiled the following synopsis for ‘Sing Me a Song’:

The rich character study is a captivating coming-of-age film about a young monk who’s searching to find a balance between tradition and technology. Balmès revisits one of the subjects from his 2014 documentary, ‘Happiness,’ Peyangki, who’s now a teenaged monk living in a rural-yet Wi-Fi equipped-monastery in Bhutan, and is absorbed in the wonders of the world that are a simple click away. The structured daily village rituals of prayer and candle lighting now compete with the powerful lure of smartphones and TV, including apps for chats and dating. A nuanced portrait of a young man’s introduction to the world, Balmès offers the audience an eye-opening meditation of the effects of technology, and challenges viewers to reassess their perceptions of self-worth and beliefs in an age of unparalleled connectivity. 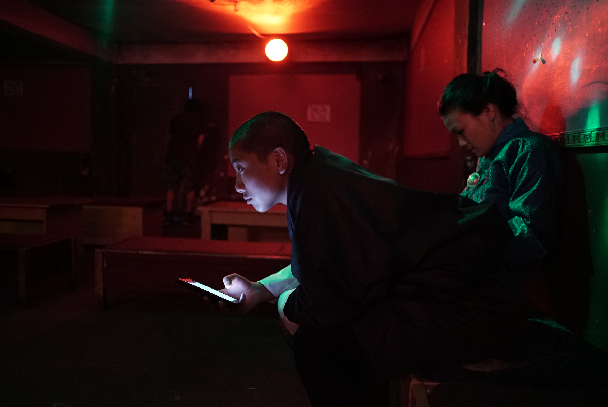 A scene from director-producer Thomas Balmès’ documentary, ‘Sing Me a Song.’

Another intriguing movie that’s garnering attention is the drama feature, ‘If Not Now, When?,’ which Vertical Entertainment is set to distribute On Demand and Digital next Friday, January 8. The movie marks the feature film directorial debuts of actresses Tamara Bass and Meagan Good. The duo also produced the drama, which Bass made her feature film writing debut on, as well. The movie also stars Meagan Holder and Mekia Cox.

Vertical Entertainment has unveiled the following synopsis for ‘If Not Now, When?’:

Four friends, who met in high school and are bonded by an event, are suddenly forced back together when one of them suffers a crisis. It’s a story of love, forgiveness and the incredible bond between women.

Genre fans will be shocked when the the horror film, ‘The Delivered,’ which is set to be released on VOD on Friday, January 15, by Quiver Distribution. The thriller was written, executive produced and directed by Thomas Clay, and stars Maxine Peake, Charles Dance, Freddie Fox and Tanya Reynolds.

Quiver Distribution has unveiled the following synopsis for ‘The Delivered’:

On an isolated farm in Shropshire in 1657, Fanny Lye (Peake) learns to transcend her oppressive marriage and discover a new world of possibility, which will come with a great personal cost. Living a life of Puritan stricture with her husband, John (Dance), and her young son, Arthur (Zak Adams), Fanny’s world is shaken to its core by the unexpected arrival of two strangers in need. The young couple closely pursued by a ruthless sheriff and his deputy.

The season’s next exciting release is writer-director Steven Kostanski’s action comedy, ‘PG: Psycho Goreman,’ which is set to be distributed in theaters and On Demand and Digital on Friday, January 22 by RLJE Films. The horror movie stars Matthew Ninaber, Nita-Josee Hanna, Owen Myre and Adam Brooks.

Siblings Mimi and Luke (Hanna and Myre) unwittingly resurrect an ancient alien overlord. Using a magical amulet, they force the monster to obey their childish whims, and accidentally attract a rogues’ gallery of intergalactic assassins to small-town suburbia.

The dark theme continues the following Friday, January 29 with the horror movie, ‘The Night,’ which is set to be released by IFC Midnight. The psychological thriller was written by Kourosh Ahari and Milad Jarmooz, the former of whom also directed and produced the film. The drama stars Shahab Hosseini, Niousha Jafarian, Gia Mora and George Maguire.

IFC Midnight has unveiled the following synopsis for ‘The Night’:

An Iranian couple, Babak and Neda (Hosseini and Jafarian), are enjoying life with their one-year-old daughter, Shabnam (Leah Oganyan). But one night, after returning home from a friend’s gathering, Babak drives drunkenly, as he’s too stubborn to let Neda drive with a suspended license. When Babak’s driving threatens the safety of the family, Neda insists they stay the night at a hotel. Once they check-in, Babak and Neda find themselves imprisoned, and are forced to face the secrets they’ve kept from each other. Though the clock moves forward, the night never ends.

The winter is set to end on a pulsating note with the supernatural horror movie, ‘The Vigil,’ which was written and directed by Keith Thomas. IFC Midnight is set to distribute the drama in theaters and On Demand on Friday, February 26. The thriller stars Dave Davis, Malky Goldman, Menashe Lustig and Lynn Cohen. Steeped in ancient Jewish lore and demonology, the mystery film is set over the course of a single evening in Brooklyn’s Hasidic Borough Park neighborhood.

IFC Midnight has unveiled the following synopsis for ‘The Vigil’:

Low on funds and having recently left his insular religious community, Yakov (Davis) reluctantly accepts an offer from his former rabbi and confidante to take on the responsibility of an overnight shomer. In his new role, Yakov must fulfill the Jewish practice of watching over the body of a deceased community member. Shortly after arriving at the recently departed’s dilapidated house to sit the vigil, Yakov begins to realize that something is very wrong.

For more information on ‘The Vigil,’ visit its official website.