Leading the battle to infuse life back into diverse elements of their existence, from such important factors as their ill family members to such creative outlets as well-known folklore, can be an equally essential and artistically satisfying journey for many people. That’s certainly the case for both the characters in, and the filmmaker behind, the new horror feature, ‘Eight For Silver.’

Writer-director-producer, Sean Ellis powerfully reimagined and updated the werewolf legend for modern audiences with the gothic period drama. By doing so, he crafted a story that serves as a metaphor for contemporary topics that can destroy families and communities, including religious persecution, teenage angst and addiction.

‘Eight For Silver’ features an eerie atmosphere of dread that’s driven by nightmares and body horror. The movie, which follows an investigation into an attack that was initially believed to be caused by a wild animal in a remote country village before a much more sinister force is discovered, takes an unflinching look at the literal and psychological monsters that plague humanity.

The drama debuted virtually last night in the Premieres section at the 2021 Sundance Film Festival, and will have its second screening tomorrow morning at 10:00am MST. Ellis is returning to the festival after his crime drama, ‘Metro Manila,’ was honored with Sundance‘s World Cinema Audience Award in 2013.

Set in the late nineteenth century, ‘Eight For Silver’ follows brutal land baron Seamus Laurent (Alistair Petrie) as he leads a slaughters on a Roma clan that claims his property and the surrounding community rightfully belongs to them. As the group, which Seamus and his neighborhoods consider to be gypsies, lay dying, they unleash a curse on his family and village.

In the days that follow, the townspeople are plagued by nightmares. Meanwhile, Seamus and his wife Isabelle’s (Kelly Reilly), son, Edward (Max Mackintosh), goes missing, and a boy from a neighboring family is found murdered. The locals suspect a wild animal is responsible for the attacks, but a pathologist who visits the community to determine the real cause of the boy’s death, John McBride (Boyd Holbrook), warns the townspeople that a more sinister presence is lurking in the woods.

Ellis generously took the time yesterday during the Sundance Film Festival to talk about writing, directing and producing ‘Eight For Silver’ during an exclusive interview over Zoom. Among other things, the filmmaker discussed why he was driven to pen and helm a period horror movie that features metaphors dealing with the werewolf curse that contemporary viewers can identify with through what plagues them in modern society. He also mentioned what the casting process was like for the drama, his approach to working with the actors on their characters’ emotional arcs and physicality throughout the story after they were cast, and what it means to him that the drama is playing during the Sundance Film Festival.

Watch our exclusive video interview with Ellis about ‘Eight For Silver’ above. 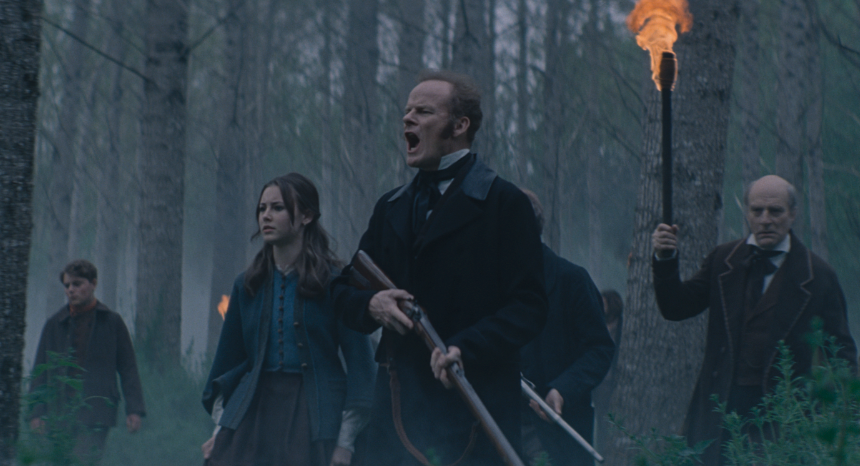