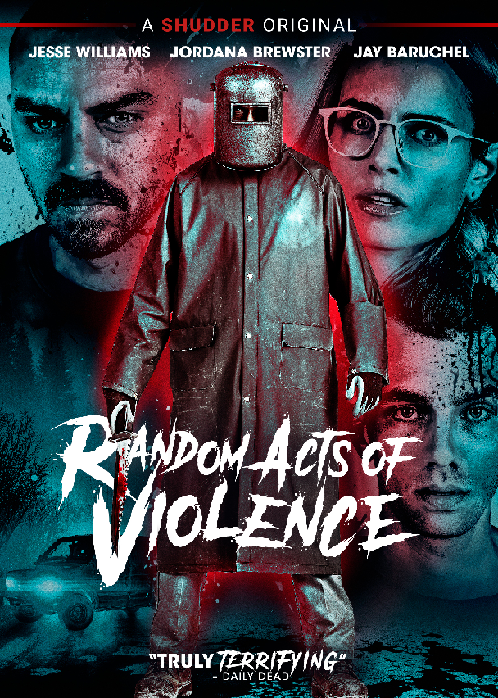 Sometimes the most horrifying sources of entertainment are the ones that are based on true events. A famous comic book series and a terrifying real-life serial killer who plagued a small town two decades ago are not only inspiring each other, but also the storyline for the emotionally gripping horror movie, ‘Random Acts of Violence.’

RLJE Films is set to distribute the thriller on VOD, Digital HD, DVD on Blu-ray on Tuesday, February 16, after it premiered last summer on Shudder. The DVD will be sold for an SRP of $27.97, and the Blu-ray will retail for an SRP of $28.96.

In honor of ‘Random Acts of Violence’s disc release, ShockYa is offering two lucky winners a DVD of the drama. To enter, email us at ShockyaGiveaway@aol.com. Let us know that you’re entering to win the ‘Random Acts of Violence’ DVD giveaway in the email’s subject line, and include your mailing address in the message. You have until February 16, the day of the movie’s release, to enter, and you can enter the contest once daily. On February 16, we’ll pick the winners at random, and notify them through email. Good luck!

‘Random Acts of Violence’ is based on the comic of the same name by Justin Gray and Jimmy Palmiotti. The screen adaptation stars?Jesse Williams (‘Grey’s Anatomy’), Jordana Brewster (‘Fast & Furious‘ franchise), Niamh Wilson (‘Saw; franchise) and Jay Baruchel (‘How to Train Your Dragon’ franchise), who also directed and co-wrote the film with Jesse Chabot (‘Goon: Last of the Enforcers’).

‘Random Acts of Violence’ follows Toronto-based comic book creator Todd Walkley (Williams), his wife, Kathy (Brewster); assistant, Aurora (Wilson); and best friend, Ezra (Baruchel), as they drive to Manhattan for New York Comic Con to promote his popular series, ‘Slasherman.’ Along the way, bad things start to happen, and people start getting killed. It soon becomes clear that a crazed fan is using Todd’s hit comic book series as inspiration for the murders. As the bodies pile up, and Todd’s friends become victims themselves, he’s forced to face the killer and put an end to his notorious comic once and for all.