Sometimes the most horrifying sources of entertainment are the ones that are based on true events. A famous comic book series and a terrifying real-life serial killer who plagued a small town two decades ago are not only inspiring each other, but also the storyline for the emotionally gripping horror movie, ‘Random Acts of Violence.’

RLJE Films is set to distribute the thriller on VOD, Digital HD, DVD on Blu-ray today, after it premiered last summer on Shudder. The drama is based on the comic of the same name by Justin Gray and Jimmy Palmiotti. The screen adaptation was directed and produced by Jay Baruchel, who also co-wrote the film with Jesse Chabot.

‘Random Acts of Violence’ follows Toronto-based comic book creator Todd Walkley (Jesse Williams), his wife, Kathy (Jordana Brewster); assistant, Aurora (Niamh Wilson); and best friend, Ezra (Baruchel), as they drive to Manhattan for New York Comic Con. The group sets out to promote the writer’s popular series, ‘Slasherman,’ which is based on the real-life serial killer who plagued the small town 20 years ago.

Along the way, bad things begin to happen, and people start getting killed. It soon becomes clear that a crazed fan is using Todd’s hit comic book franchise and the real-life murders as inspiration for the new crimes. As the bodies pile up, and Todd’s friends become victims themselves, he’s forced to face the killer and put an end to his notorious comic once and for all.

Baruchel generously took the time to talk about co-writing, directing, producing and starring in ‘Random Acts of Violence’ during a virtual roundtable interview. Among other things, the filmmaker discussed that he and Chabot were in part inspired to pen the script for the thriller because they felt it would help spark an important conversation about what causes people to commit mass murders, and what society can do to help stop them from carrying out the heinous crimes. He also expressed his appreciation over how dedicated and passionate the rest of the cast, especially Williams and Brewster, were about starring in the drama, and how he enjoyed working with them on the set, especially as their co-star and director, as they helped bring his vision for the story to life.

The conversation began with Baruchel explaining why the comic inspired such dedication in the filmmakers to bring its story to the screen. “It was an assignment, and we pitched on the assignment and got the job. We then started writing it to the best of our ability. In doing that, it became our baby,” he revealed. “We thought there was an interesting, and potentially important, conversation. We also thought there was the potential to do something meaningful. We just believed in it and thought it was worth doing. Anytime we saw that other people couldn’t see the same movie as us, we decided to be precious with it, even though we had no business being precious.”

The actor, who’s primarily known for starring in comedies, noted that a horror film like ‘Random Acts of Violence’ at times engages audiences to experience the same emotions as more humorous movies. He noted that all filmmaking relies on being “truthful and as compelling as possible. I don’t think it’s specific to any genre; it’s all the same game for me.

“The (two genres are) also similar because they’re both very direct genres that appeal to your heart…and are deceptively fun. They’re both genres that don’t get enough love from the intelligentsia. Those are the similarities that I see. But at the end of the day, they’re all playing with people’s attention span, heart and mind,” Baruchel added.

The writer then delved into what kind of research he did while he was collaborating with Chabot on ‘Random Acts of Violence’s screenplay, particularly into the slasher sub-genre, and how that research influenced his creative choices as the director. “We didn’t have to do any deliberate research because this movie was made by a bunch of nerds; we all already know all of that stuff. My cinematographer, Karim Hussain, is not only one of the best cinematographers in the world, but he also co-founded the Fantasia International Film Festival, which is by far my favorite film festival in the world.

“I’m pretty certain it’s the only festival I’ve attended as a paying ticket holder from the general public, as I’ve been going up there since I was 14,” Baruchel revealed. He added with a laugh, “I grew up going to watch horror movies that Karim was programming at the festival, and then we made a movie together.

“So all of the references in our film were organic and earnest, and already part of our vocabulary. As fans of the genre, we’re deeply opinionated about what we like and don’t like, and what works and doesn’t work,” the filmmaker continued. “In terms of homages, there aren’t a lot that are direct; they just end up being there.

“But there are a few movies that were directly referenced, including ‘White of the Eye,’ which is a trippy serial killer movie from the ’80s. The camera work in it is just staggering,” Baruchel also noted. “So Karim showed up, thinking that that film might have some stuff for us.

“One movie that I (drew inspiration from was) ‘The Red Shoes,’ especially the prolonged sequence in the ballet and you’re in it on stage with her. I knew there was something in that sequence that could inform our movie,” the scribe added. “We also went in knowing that we wanted the violence to be irreversible and ‘Zodiac’…as we wanted to take the fun out of our kills, and make them as scary as possible.”

Throughout the events that take place in the thriller, Todd and his friends must contend with the fact that art and life are constantly imitating each other. “We did our best to explore the nature of inspiration…Everyone is responsible for what they put out into the world, and no work of art makes anyone do anything,” Baruchel emphasized.

“I say that because I’m 28, and I was in grade 11 when Columbine happened, and it was this great paradigm shift for people after that. I can’t stress enough how much of a game changer that was, and it led to this fascicle debate” over what caused the shootings, the filmmaker also noted. “You can do whatever you want, but it doesn’t mean that you’re not accountable to some degree for it.

“When I can name the killer of eight slasher films, but can’t name any of their victims, you can’t tell me that the victims are the heroes. These movies aren’t about them; these are stories in which the killer is the hero,” Baruchel insisted. “So I want people to ask themselves about the decisions they make.”

Following up on the fact that people have to take responsibility for their own decisions and action, the director also discussed why he felt it was important to make Kathy have more of a conscience in the screen adaptation than in the comic. “We wanted her to have as much to do as possible. That made us realize that while we’re on Todd’s journey, she faces all the consequences. So we also realized that we can say something about people in close proximity to artists,” he explained.

“There’s something about giving your heart to someone who you’ll never be a true number one priority to, as long as they’re prey to their creativity. I would argue that art without a life around it isn’t worthy of experiencing, so we wanted to reflect that in the movie,” Baruchel continued.

“We wanted to build someone who would never put that before her obligations to her family She made the mistake of pairing up with someone who doesn’t necessarily subscribe to that same idea. We needed someone to defend that viewpoint,” the filmmaker shared.

“So there was a dialogue between Jesse and I about trying to reconcile our fascination with our morals. The older we get, the harder it became to just enjoy stuff just for the sake of it. We were forced to face ourselves, and ask ourselves certain questions. I think that came from years of writing this horror movie, and stopping to ask ourselves if we were approaching this in a responsible way,” Baruchel added.

“If we were capitalizing on something that’s really awful, it wouldn’t sit well with us. So Kathy began the voice of that, and is the embodiment of everyone who has suffered from being too close to an artist,” the helmer also shared.

The experience of working with Brewster, Williams and the rest of his co-stars was something that Baruchel also embraced throughout ‘Random Acts of Violence’s production. He admitted, “I’m an actor I would never want to work with again, as I gave the performance that I enjoyed the least in the film. But it’s a small movie, and like any small business, sometimes you have to wear multiple hats.

“So I decided to also be in it to help get it going, but it was very stressful to act while I was directing. There are a bunch of shots in the movie that if you didn’t know what I was doing, you’d think I was just acting. But I was actually staring at the floor towards where the mini-monitor was, to make sure that the shot still looked okay,” the performer revealed with a laugh.

“But Jesse, Jordana, Simon Northwood and Niamh Wilson are really great actors. One of the things that I really love about this movie is that it’s filled with special, unique characters, and they each have their own distinct voice,” Baruchel continued.

“In terms of getting Jesse and Jordana, I was lucky to be able to send the script out to a bunch of great actors and actresses, a bunch of whom responded kindly, and were nice enough to give me their time to chat about it,” the filmmaker shared. “Something happened in the chats with Jesse and Jordana that didn’t happen in any other one, which is why we ended up making the movie together “A couple of minutes into chatting with both of them, I could tell by the cadence in their voices, as well as their posture and the way they were carrying themselves made my heart yell, ‘You finally found them!,'” Baruchel shared.

“I told them, ‘This is exciting; I’ve been writing these characters forever, and now your responsibility is to defend your characters on set, as they now belong to you. If I’m making a decision for you that you don’t think your character would actually make, lets find a way to make one that they would make. As a writer, I told them, ‘Your ad-libs are better than my dialogue, so I’ll just give you things to think about, and you can create your own lines,'” the director also noted.

“As many movies do, we started shooting on a Monday, and we didn’t cast Simon, who plays the killer, until the Friday before we began shooting. There was a series of inconvenient circumstances that eventually yielded an audition from him at the eleventh hour, and it happened to be the best one we had seen the whole time. I’m super proud because his performance is a gift to the movie,” Baruchel concluded. 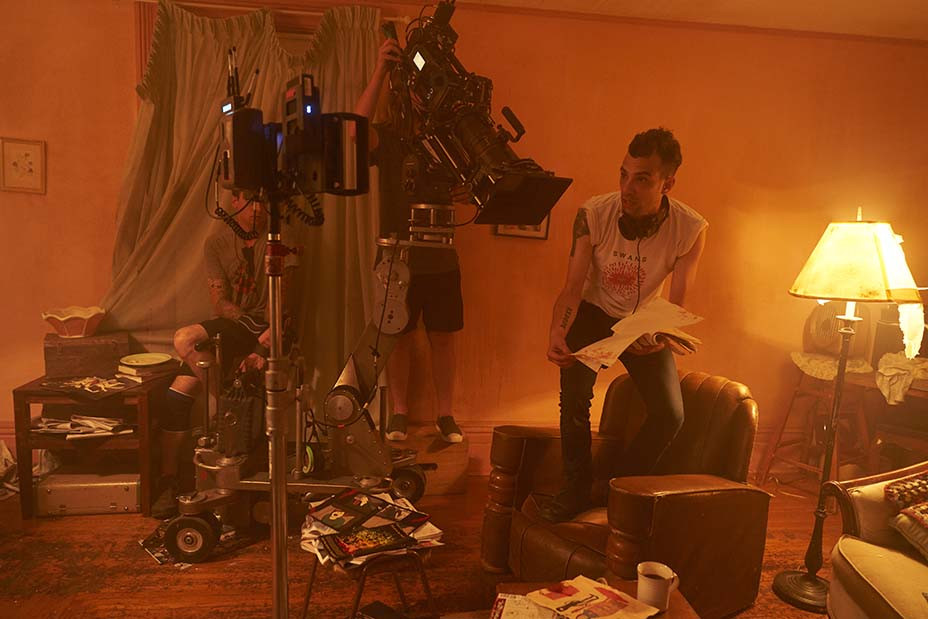