Striving to protect both society and her young son from their respective uncontrollable fury towards each other, while also minimizing their isolation from each other, has become the ultimate paradox for the protagonist of the new sci-fi film, ‘Into the Dark: Blood Moon.’ Actress Megalyn Echikunwoke’s character of Esme will do whatever it takes to defend her child, who was born with a unique condition that could ultimately get him killed if it’s revealed to their community, while also trying to shield their neighbors from his wrath if his true identity is exposed.

‘Blood Moon’ follows Esme and her ten-year-old son, Luna (Yonas Kibreab), as they move to a small desert town. While they’re only looking for a fresh start, they inadvertently attract all the wrong kinds of attention. As the locals begin to probe, Esme must battle to protect her son and a terrifying secret before the next full moon threatens their very existence.

Producer Jason Blum‘s independent television studio, Blumhouse Television, crafted ‘Into The Dark,’ which is a monthly horror event series that’s inspired by different holidays. The feature-length installments include Blumhouse’s signature genre-thriller spin in its stories. ‘Blood Moon’ serves as the the anthology series’ second season finale, and honors the spring full moon. The episode premiered on Hulu today, in honor of this weekend’s celebration of this month’s full moon.

The drama was written by Adam Mason and Simon Boyes, the former of whom also directed two installments in the anthology’s first season-‘I’m Just F*cking With You’ and ‘They Come Knocking.’ ‘Blood Moon’ was helmed by Emma Tammi, who previously directed last year’s Mother’s Day entry, ‘Delivered.‘

Tammi generously took the time recently to talk about helming ‘Blood Moon’ during an exclusive interview over the phone. Among other things, the filmmaker discussed that she was drawn to direct ‘Blood Moon’ and return to the ‘Into the Dark‘ franchise after she helmed ‘Delivered,’ as she cherishes the creative freedom and guidance that both Blumhouse Television and Hulu offered her during the production of her first installment. She also mentioned that she enjoyed working with Echikunwoke and Kibreab on creating the strong mother-son bond between Esme and Luna during ‘Into the Dark’s second season finale’s shoot.

The conversation began with Tammi explaining why she was drawn to helm ‘Blood Moon,’ and how she become attached to the project. “I was familiar with the ‘Into the Dark’ team from directing (‘Delivered’), so they passed the script for ‘Blood Moon’ to me. I really love the world and characters,” she shared.

“We were off to the races once there was an open window to get back up into production because it was still during the height of the pandemic. So we were able to shoot last September and October,” the filmmaker revealed. “I felt fortunate that we were able to do so safely, and were able to complete shooting without being shut down. We prepped everything safely, and did post-production remotely.

“I also felt fortunate that we were able to work, and have a lot of people who worked on the crew for previous episode work with us, so we had had a point of reference. We were able to jump into things pretty seamlessly, even though we had a whole new batch of challenges that everyone was trying to figure out,” Tammi added.

The filmmaker then delved into what her overall directorial style was like during her latest episode’s production. “We lucked out in the sense that the script was well suited to a smaller scale cast and remote setting. So in terms of making it a pandemic-friendly shoot, we were already in the zone with the script, and that felt really good,” she noted.

“I approached the project in a very stylistically grounded way, even though there’s a supernatural element to the story. We leaned into this off-the-grid vibe, and create this new story of a mother and son’s love for each other, even in the most challenging circumstances,” Tammi also shared.

Further speaking of the bond between the mother and son, the helmer then delved into what the casting process was like for ‘Blood Moon,’ especially for Echikunwoke and Kibreab. “Everything was done remotely. It was really a wild card of whether the chemistry between our mom character, Esme, and son character, Luna, was going to be there. But it was, and we were so lucky that we found two actors who clicked so quickly, even during social distancing circumstances, and not having any prep time together,” she revealed with a laugh. “Other than being remote, it was a pretty traditional casting process.”

While Echikunwoke and Kibreab didn’t have much prep time together once they were cast, like Tammi mentioned, they were still able to collaborate together to a small degree to build their characters’ backstories and arcs. “We were all physically more separated than usual, and wearing masks and shields, like we all are everyday. I would say that within the first week, everyone got accustomed to the new normal of that. I was pretty impressed with how adaptable everyone was,” she admitted.

“Everyone was so excited to get back to work and tell a story together. All of our desire to be there was refreshed by having been through the pandemic. It was such a joy to be together everyday, and the cast’s enthusiasm to make the project definitely translated into them having an incredible work ethic. That helped create their chemistry,” the filmmaker added.

In addition to working with the actors on building their characters’ emotional arcs and relationships throughout the drama’s shoot, Tammi also cherished the process of collaborating with them to create their physcalities, as well as their stunt work. “Well, Yonas, who played Luna, is the youngest actor I’ve ever worked with, so that was a new process for me. I really wanted to incorporate him into the character as much as he wanted to give. He’s such a pro, and handled himself in an adult matter,” she gushed about the performer.

“I wanted Megalyn to make Esme her completely own character, as well. So working with both of them to try to make the characters feel authentic was an important part of the process,” the director also shared.

“In terms of the action sequences, we didn’t have a ton of stunts, but we had a couple, and they were super fun. For those action-packed sequences, the energy’s always so much higher. So it was always about helping Megalyn and Yonas stay in the zone once they reached the peak of their energy,” Tammi added. “They were so great at getting there and nailing the range of emotions that was needed for this project.”

‘Blood Moon’ follows Esme and Luna as they move to a small desert town as they’re looking for a fresh start. The filmmaker enjoyed the process of working with the movie’s production designer, Eve McCarney, to create the look of the locations, which helped drive the story.

“We scouted a couple of different locations around Los Angeles, and we really just lucked out with all of the locations we ended up choosing. It was a little weird location scouting because we were doing it during fire season during a pandemic,” Tammi admitted. She added with a laugh, “It felt as though the world was ending while we were trying to make a movie. Besides the bizarre context, it was really a great location scout, and we ultimately landed these really great locations.

“We had a lot of locations, so the production design team really had its hands full. They designed a lot of the locations in places that were completely stripped and bare, particularly in the time we were shooting in,” the helmer added. “So the team had a lot to create, and not just style practical locations. The whole department worked so hard to make it all happen.

“I also worked with the team on ‘Delivered,’ so we all already knew each other, which was so great. They were very in sync with where my general tastes tend to lie, and I also have a point of reference of where they like to work. So we were really able to dig in quickly, which was fantastic,” Tammi also noted.

Being able to reunite with Blumhouse Television for ‘Blood Moon’ was another aspect of the job that the filmmaker appreciated during the production. “It was one of the big draws of doing another episode of ‘Into the Dark.’ I’m a fan of the Blumhouse team, as they’re very supportive of filmmakers,” she noted.

“I think this was the most extreme of circumstances. We were trying to get back up and running after the show had been shut down. The production challenges that were created by the pandemic were unprecedented, so we were all trying to figure it out together. They really had all eyes on keeping things safe and moving, while also supporting the creating side. So that was incredibly helpful and appreciated, especially during this episode,” Tammi added.

Besides reuniting with Blumhouse Television, the director also enjoyed the process of working with Hulu again on another ‘Into the Dark‘ installment. She shared what the experience of working with the streaming service on the latest episode of the series was like during the production.

“Their input on this episode, from the script stage to the prep, shoot and post (production) was just very helpful. They’re really keyed into their audience, which I really appreciate, as well as the stories. So it was a very fantastic collaboration, and I was excited to have the opportunity to work with them again,” Tammi concluded. 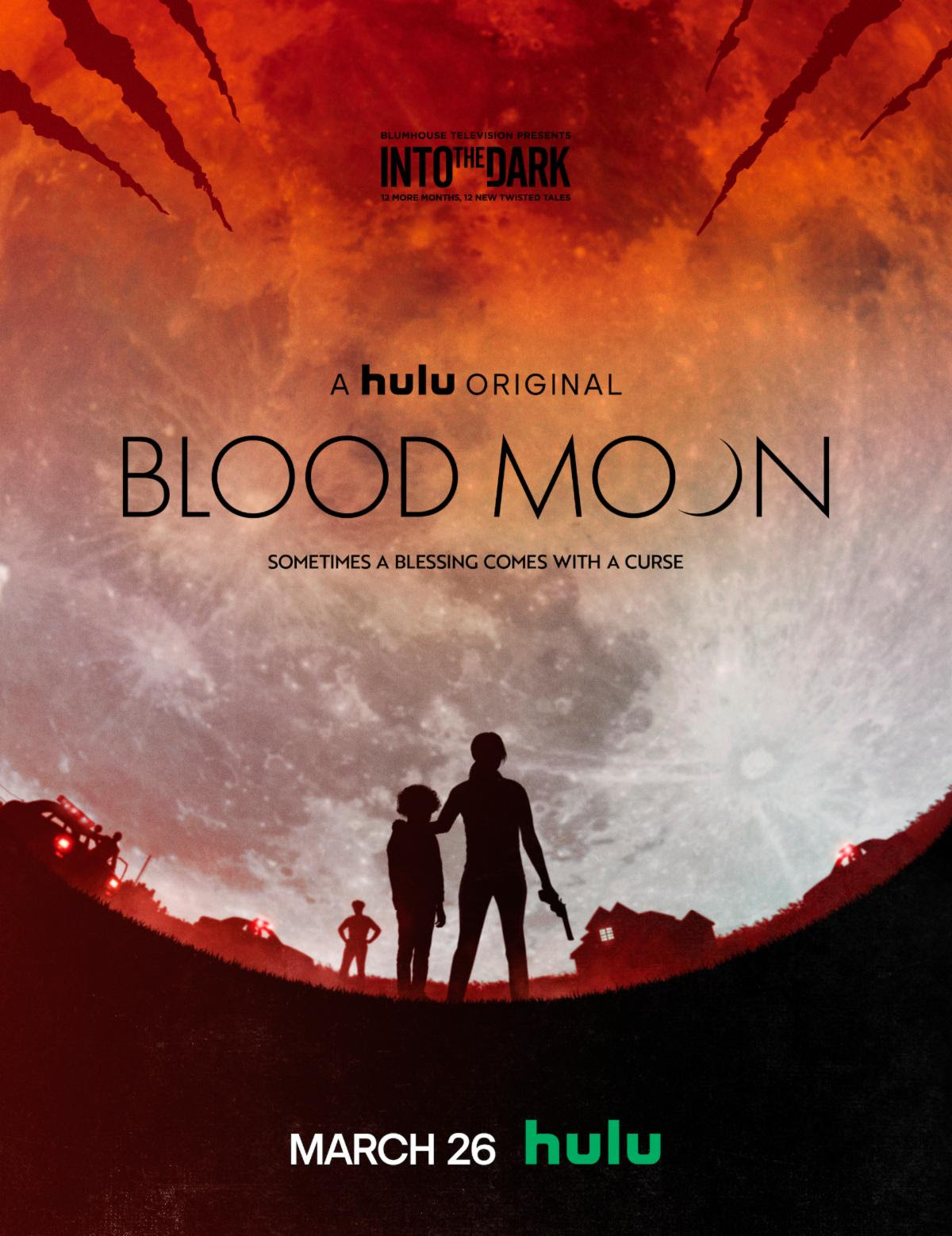