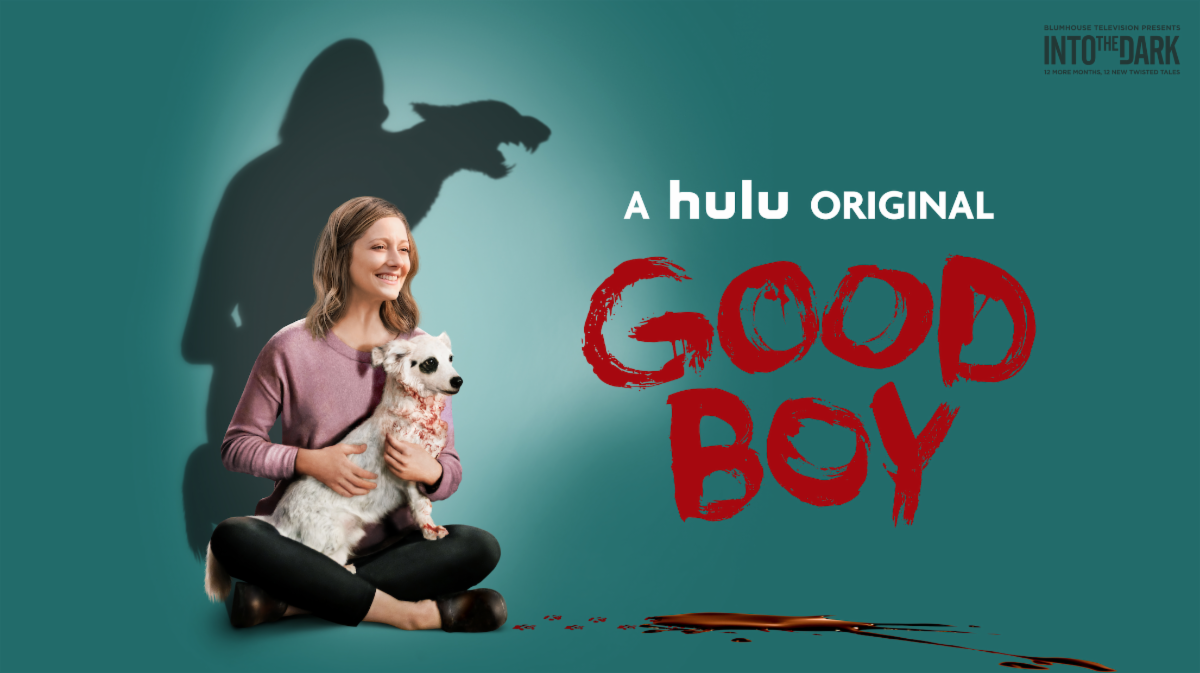 Judy Greer and Chico the Dog star in Blumhouse Television and Hulu’s horror thriller film, ‘Into the Dark: Good Boy.’

Sometimes the relationships that are meant to enrich and improve people’s lives end up being the very thing that ultimately damages and ruins their existences. That’s certainly the case for Judy Greer’s good intentioned protagonist, Maggie, in the new horror film, ‘Into the Dark: Good Boy.’ The well-meaning journalist becomes increasingly determined to fulfill her personal dream of starting a family, but when she begins off her goal by adopting a dog, her vision is shockingly ripped apart.

‘Good Boy’ is the latest entry in the anthology series, and serves as ‘Into the Dark‘s Pet Appreciation Week episode.It was written by Aaron Eisenberg and Will Eisenberg, and directed by Tyler MacIntyre. The movie premiered on Hulu earlier this month, in celebration of Pet Appreciation Week.

‘Good Boy’ follows Maggie, a single woman who’s life isn’t going the way she hopes. She lives on the outskirts of Los Angeles in a working-class apartment building, and doesn’t get along with her pushy landlord, Bea (Maria Conchita Alonso), who starts trying to raise the fee for her rent-controlled apartment. While she tries to remain optimistic about other aspects in her life, Maggie becomes increasingly worried about the fact that she’s 39, and isn’t yet married, let alone dating anyone seriously, or a mother, yet.

Maggie’s life goes downhill even further when she loses her job as the culture editor at the local Valley Yeller newspaper, which is shutting down and going digital. When her former editor-in-chief, Don (Steve Guttenberg), suggests that she get an emotional support animal to help her deal with being laid off, she takes his advice. She goes to the local shelter and adopts a small dog, which she names Reuben (Chico the Dog) after she brought him home and he ate her sandwich.

Life begins to improve for Maggie when she starts working part-time at her neighborhood coffee shop and begins dating one of her frequent customers, Nate (McKinley Freeman), and reconnects with the woman she used to babysit, Annie (Ellen Wong). Maggie also becomes a perfect candidate for fertility treatments, so that she can further her chances of becoming a mother. But her life instantly changes again when one of Reuben’s secret traits is frighteningly revealed, and makes his owner question whether or not she should use his skills to her advantage.

MacIntyre generously took the time recently to talk about directing ‘Good Boy’ over the phone during an exclusive interview. Among other things, the filmmaker discussed how after Greer helped bring the Eisenbergs’ spec script to Blumhouse, the production company approached him with the opportunity to helm the episode. He also shared how he enjoyed the experience of collaborating with Greer as both the lead actress and an executive producer on the drama, especially since she formed a strong, natural bond with Chico, both on-screen and in real life.

The conversation began with MacIntyre explaining how he became involved in directing ‘Good Boy,’ and what his helming style was like on the set. “I had gotten close to directing an earlier episode of the series last season, ‘Uncanny Annie.’ But we couldn’t make the schedule work, so I couldn’t end up doing that episode, and they went in a different direction,” he divulged.

“So I was already interested in doing one of the ‘Into the Dark‘ episodes, but I felt like i had missed out on an opportunity. But luckily, the people at Blumhouse kept me in mind for the new round of projects they were doing,” the filmmaker continued. “They were aware of my first couple of movies, particularly ‘Tragedy Girls.’ They were looking for voices who fit the stories they had, and because of that film, they thought of me for this one.

“I think Judy brought (Blumhouse) the script that Aaron and Will had written for ‘Good Boy,’ which was a spec script. Then they thought that I might be able to do this material, because there’s a bright element of comedy amongst the horror, and sent it to me,” MacIntyre further shared.

“I really enjoyed it; I thought the writing was quite sharp and a lot of fun. It also had things in common with the type of things that I normally write. This is the first time I’ve directed a feature that I also haven’t written myself, or with a writing partner,” the director revealed. “So I was happy to see that a lot of the themes in this script had a lot of the same themes that I previously had interest in. I also like how it dismantles pet culture in L.A., as a lot of people there take so much pride in their dogs, which we could fit a horror story in.”

Following up on the pride of the pet culture in L.A., and the fact that the film is the Pet Appreciation Week installment of the ‘Into the Dark‘ series, MacIntyre then delved into what the experience of bringing that theme into the episode. “We knew it was going to be a loose association with Pet Appreciation Week. We felt the story had enough to do with pets, and the fact that we see someone actually adopt a pet would bring that idea to people’s minds.

“For me, a lot of the challenges came from the process of truly working with animals for the first time,” the filmmaker admitted. “I’ve done some work where cats and dogs had small roles, but this was the first time that a dog was a main character. So there was a concern about whether we could get this amount of pet work done with the schedule we had.”

MacIntyre also shared that “Chico, who played Reuben, didn’t work everyday, but he worked the vast majority of days, and was often working with Judy. So we knew we needed a dog who could do a lot of amazing work. So we met a few dogs, and once we met Chico,” the crew was drawn to cast him in ‘Good Boy.’ “He had the right look and work ethic, and he loves being on sets. He and Judy also got along, so we knew he was the right choice. Thankfully, we were able to make it work…Chico was reliable, and we were usually able to get his scenes done in one take.”

With the thriller focusing on the fact that Reuben attacks anyone who adds stress to his new owner’s life, there was some stunt work that the cast had to do on the set. While “There’s some action in the movie, there’s not a ton of it,” the helmer revealed. “The weirdest challenge that I actually saw when we worked with the monster version we had of Reuben” when he was abmushing the people he perceived to be threatening Maggie. “We had a person in a suit, and those sequences were then created with creature effects.

“Since this is a horror movie, Judy also did a lot of screaming and gasping really loudly,” MacIntyre noted. “She and (Chico) had become so close that he really came to like her as a person, and would always want to be with her.

“But when he wasn’t in a scene, he would be with his trainer somewhere else in the building. But he would still be able to hear her in distress, and then think she was in trouble. So he would become stressed, because he didn’t understand that she was acting,” the filmmaker divulged with a hint of a laugh. “So we had to make sure that they had some time to get back together, so that she could pet him, because otherwise, he wouldn’t be able to perform. So it was interesting to find those psychological elements that we didn’t initially think about before we began filming.”

The director then delved into how Greer became attached to play Maggie in ‘Good Boy.’ “Judy was involved with the project before I was. She worked with Blumhouse before, on the ‘Halloween’ series. I think she actually brought this project to them, after she was approached by the writers, Aaron and Will.

“It’s a classic Hollywood story; they actually ran into her at a coffee shop on Larchmont (in Los Angeles), where they all live. They struck up a conversation, and they told her they had this script. She ended up really liking them and the script. So she attached herself to the project, and they brought it to Blumhouse, and then they brought me on, and we got the opportunity to make it,” MacIntyre divulged.

“I love Judy’s work, but she’s often a supporting player. So I was really excited about the opportunity to get to make something where she’s the central character,” the director also divulged.

Once production on the drama began, and Greer and her co-stars were cast, they didn’t have much time to rehearse together. “We did have a table read, as well as a little rehearsal time on the day. I also met with them, especially Judy, Ellen and McKinley before we began filming. But with these types of indie schedules, we didn’t have time for the typical rehearsal period that I usually like to have,” MacIntyre admitted.

“But with the time we did have, we focused on the key character arcs. I wanted to make sure that Judy and I were on the same page, in regards to Maggie and her journey. Thankfully, since she was there everyday, as both the lead actress and executive producer, we were on the same page about what was required pretty early on in the process,” the filmmaker divulged.

Following up on the fact that ‘Good Boy’ was produced by Blumhouse Television for their ‘Into the Dark’ anthology series, MacIntyre noted that the production company was “great. They have an effective system of working, and they’re super efficient. You can tell as soon as you start pre-production with them, they have things dialed in. I think they took tight control of the resources we had, and they put a lot of those resources on screen.”

The helmer added that he also appreciates the fact that the film is now streaming on Hulu, “as it’s one of my favorite platforms. So I’m really looking forward to seeing how this installment in the series connects” with their audience.