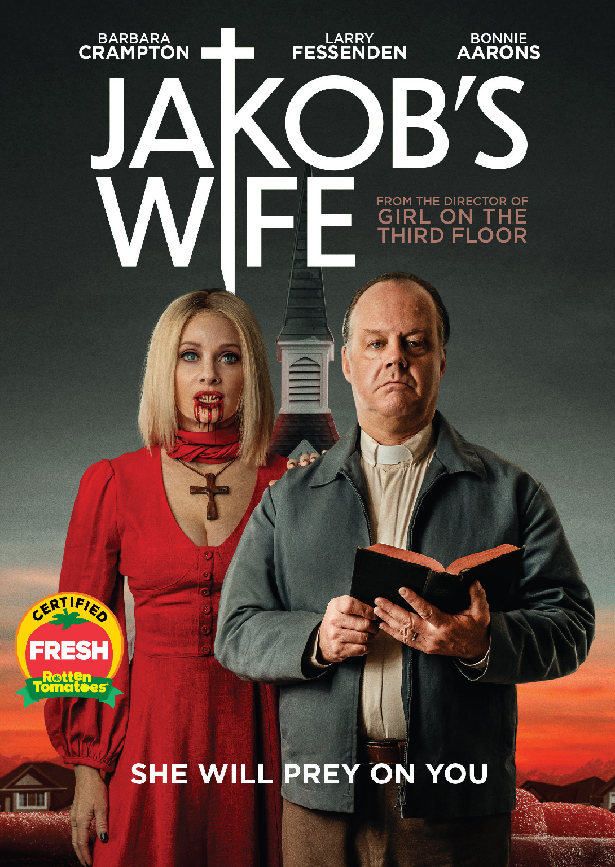 Unexpected turmoil and changes in society have long inspired people to make serious adjustments in their professional and personal lives. The title anti-hero in the new horror movie, ‘Jakob’s Wife,’ is a prime example of someone who’s struggling with how external events are influencing her to embark on an internal transformation.

RLJE Films is distributing the feature today on DVD and Blu-ray, following its release in select theaters and On Demand and Digital on April 16. The drama’s official release came after its World Premiere during the Midnighters section at SXSW in March.

‘Jakob’s Wife’s DVD will be sold for an SRP of $27.97, and the Blu-ray will retail for an MSRP of $28.96. The discs include several bonus features, including the featurette, ‘The Making of ‘Jakob’s Wife,’ and deleted scenes.

In honor of ‘Jakob’s Wife’s disc distribution, ShockYa is offering two lucky winners a DVD of the movie. To enter, email us at ShockyaGiveaway@aol.com. Let us know that you’re entering to win the ‘Jakob’s Wife’ DVD giveaway in the email’s subject line, and include your mailing address in the message. You have until next Tuesday, July 27 to enter, and you can enter the contest once daily. On July 27, we’ll pick the winners at random, and notify them through email. Good luck!

‘Jakob’s Wife’ follows Anne (Crampton), who’s married to the title small-town minister (Fessenden), and feels like her life and marriage have been shrinking over the past 30 years. After a chance encounter with The Master (Aarons), she discovers a new sense of power and an appetite to live bigger and bolder than before. As Anne is increasingly torn between her enticing new existence and her life before, the body count grows, and Jakob realizes he will have to fight for the wife he took for granted.