Incorporating a universal and visceral human experience into a film’s story that also highlights the unique perspective of immigrants in their new country can often inspire a commanding emotional response from the audience. That’s certainly the case with the new romantic crime thriller, ‘Baby, Don’t Cry,’ which also gives an enthralling depth to the psychological and emotional elements of love, coming-of-age and family struggles.

The movie was written and executive produced by lead actress, Zita Bai, who brings the audience on an emotional journey, as she emphasized the characters’ environments through the lens of a fable. That voyage was brought to the screen by first-time feature film director, Jesse Dvorak.

‘Baby, Don’t Cry’ is having its virtual World Premiere tonight at 9pm ET in the Underground lineup at the Fantasia International Film Festival. The drama will also virtually play on Friday morning at 9am ET.

Told in English and Chines with English subtitles, ‘Baby, Don’t Cry’ follows the title protagonist (Bai), a withdrawn and sensitive 17-year-old Chinese immigrant from a troubled home, is living in the outskirts of Seattle. She makes sense of her tumultuous home life and outsider existence through her indie films and animalistic visions of the world.

Baby eventually begins to feel accept when she meets a 20-year-old drug dealer named Fox (Vas Provatakis), who has questionable decision-making skills. Teetering between Baby’s fantastical visions and Fox’s raw punk-rock ethos, the two dive headfirst into a dangerous romance, in order to escape their hopeless fate. Attempting to navigate their past traumas and hopeless future, the two struggle with a relationship that’s against all odds, and leads them to live on the edge of the social ladder.

Bai, Provatakis and producer Qiyu Zhou generously took the time recently to talk about writing, starring in and producing ‘Baby, Don’t Cry’ during an exclusive Zoom interview. Among other things, the filmmakers discussed that Bai was in part driven to pen the feature’s script because she, like her eponymous character, grew up as immigrants in Seattle, where they felt there wasn’t much representation for people like them. The filmmakers also expressed their happiness and appreciation that the thriller is having its World Premiere at this year’s Fantasia International Film Festival.

ShockYa (SY): Zita, you made your feature film writing debut on the new coming-of-age romantic crime thriller, ‘Baby, Don’t Cry.’ What was your inspiration in penning the screenplay?

Zita Bai (ZB): I was born and raised in China, and moved to America as a young teen. Growing up in Seattle, I realized there wasn’t a lot of representation for immigrant kids like myself. So that’s why, when I decided to become a filmmaker, I wanted to dedicate a story to immigrant kids.

SY: Vas, you play Fox in the movie. How did you become attached to star in ‘Baby, Don’t Cry?’

Vas Provatakis (VP): I was just a hired gun for it. I auditioned for the role, just like a hundred other actors.

When I got the sides, I felt an automatic connection to the character, and like I knew who he was. I also knew exactly how I wanted to express him, as I knew kids like him growing up.

A little backstory on me is that I grew up in several small towns all over the east coast; I moved 10-12 odd times while I was growing up. So I got to see what it was like living in a rural place and in a city.

As a result, Fox reminded me of these grungy kids that I knew in these small towns that I lived in. So a hypothetical question came about of who would I be if I stayed in a small town, and never moved to California and had the exposure of moving around. It was very cathartic being in that situation.

It’s one of the things that I love about acting; I get to live these different, parallel lives.

Qiyu Zhou (QZ): I jumped on board because Zita originally asked me for notes, as I’m also a director from the American Film Institute. But after I read the script, I felt it was very nourished, brave and personal.

I’m also inspired to write from my own experiences. So when stories are so specific to an individual, I want to help guard their vision. So I wanted to help Zita tell this story.

SY: Further speaking of the collaboration you all had together while you were making the film, what was that process like for you all to work together on this project?

QZ: The collaboration for this film was amazing! We lived together in a mansion in Seattle. The rest of the crew, as well as the cast and I, left the big city behind to move to a smaller town for about a month, and we developed a friendship and lived like family for a peaceful moment. We were able to concentrate on this project, and only this project.

We realize that we work every day for so many hours, but we didn’t really feel tired because we were so happy and concentrating on the film. Once you don’t have the burden of the chaotic life, you can relax. So the process of making the movie together was like a mental message for everyone who has lived in L.A. for many years.

SY: Once production on ‘Baby, Don’t Cry’ began, what was the process like of collaborating together to develop your characters’ relationship?

ZB: I think we had Vas about three weeks prior to the start of filming, so we didn’t have the luxury of doing a lot of rehearsals. But we did have a lot of chemistry tests. We spent a lot of time talking and doing exercises in a room, so that we could build the trust and connection between us, which really helped me.

VP: Yes, we had a little bit of time to see how well we got along. Zita and I are similar in that we both have the ability to try new things to see what works.

One of the things that was really amazing about working with Zita is that she’s very generous and allows us to have the space to try new things and see what works and what doesn’t. When you’re acting with her, your job is just to react.

She’s also so intent with her characters, and every decision is calculated and meditated on. For that reason, she makes the job easier.

ZB: Likewise; I feel like you made the the job easier for me.

SY: Did you also improv at all during the production, in an effort to also build the dynamic between Baby and Fox?

OZ: There was a lot of improvising.

VP: There was a healthy amount of improvising.

ZB: The emotions were premeditated. We had the script, and knew what emotions we had to go through, and where we had to land, in each scene. Since that was scripted, we had to stick to that. But in terms of lines and body gestures, a lot of that was improvised.

SY: Oiyu, earlier you mentioned the fact that the thriller was shot in Seattle. What was the experience like for you all to be on location for ‘Baby, Don’t Cry?’

OY: At first I thought it was going to be hard because I don’t have any connections in Seattle. But after I landed there, I found that it’s actually easier because after we told people that their location looks gorgeous and they want it to be in the movie, small town business owners were so excited and say yes. They were super welcoming and wanted their locations to be in the film. We got so many choices, which is different than in L.A.

ZB: Didn’t we have tea with the mayor of the city of Everett?

OY: Yes, the city of Everett was really helpful.

ZB: They were very supportive. The Seattle Film Institute also gave us a lot of support. The staff at the high school we shot in was also amazing.

OY: We had to shoot a lot of scenes on a bus. That would have been incredibly hard if we did that in L.A., as it would have been costly to get a permit. But the city of Everett let us use it for practically free.

SY: Jesse Dvorak served as the director on the movie. What was your experience collaborating with him on ‘Baby, Don’t Cry?’

ZB: So I met Jesse a few years before we started making this movie. We already shot another feature film together in Los Angeles, on which I was his producer.

So once I finished this script, I wanted to hire someone I could trust, and who would also trust me. That’s why I thought about Jesse.

VP: Working with hims was a total delight. He’s one of the most enduring, sensitive guys that I have ever met, and he’s so open about it.

As a man, as well, when you’re acting in his films, he gives you the space to go in and bring your own vulnerabilities and sensibilities. In this day and age, it can be difficult for a regular guy to do that. So I’m very excited and grateful that I was able to work with him.

ZB: I’m also very grateful for the courage and trust he gave me. He respected the story so much, and allowed me to lead him through certain scenes

OZ: As a producer, I also really appreciated how calm he always was on set, and he never lost his cool, especially with the intense schedule we had. He was able to keep everyone relaxed, and get the best job out of everyone. It was great working with him.

SY: ‘Baby, Don’t Cry’ is having its World Premiere in the Underground lineup (tonight) at this year’s Fantasia International Film Festival. What does it mean to you that the drama is premiering at the festival?

ZB: To be honest, I didn’t expect all of this attention, or to get into my dream festival, Fantasia. (Bai laughed.)

VP: I think it’s a miracle in itself when a film even gets made. So to see it get received positively and get into festivals is a delight. 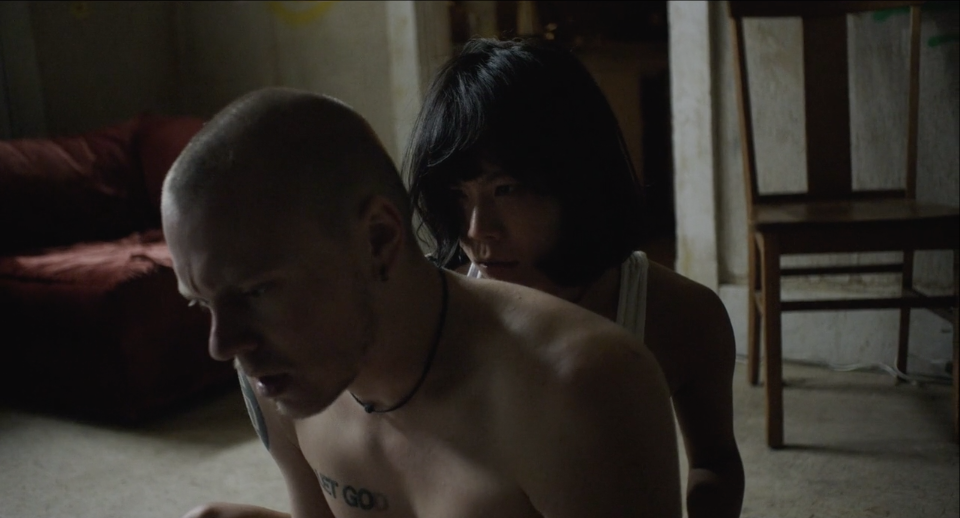